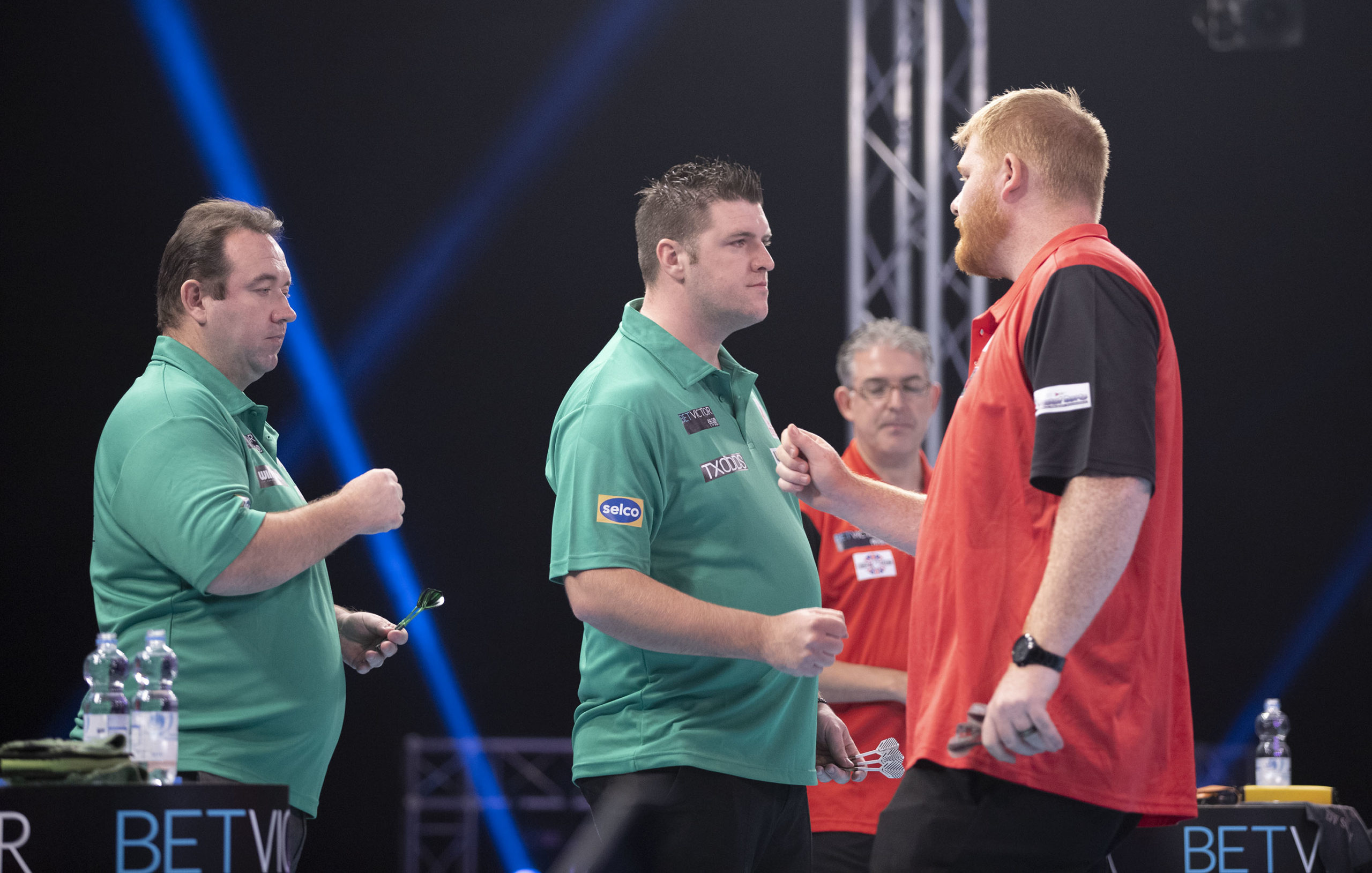 Northern Ireland and Republic of Ireland were the only seeds to fall on day one of the 2020 BetVictor World Cup of Darts.

Northern Ireland were beaten 5-2 by Canada, while last year’s runners up the Republic of Ireland lost to Australia by the same scoreline in Salzburg.

Elsewhere day one of the World Cup of Darts saw:

Canada produced the biggest shock on day one of the World Cup of Darts, beating Northern Ireland 5-2.

The Northern Irish started well, with Brendan Dolan hitting a lovely 117 checkout to lead 1-0. However, Canada would level, before team captain Jeff Smith turned the match in his country’s favour, finding a beautiful 154 checkout to break throw and lead 2-1.

The Canadians consolidated the break of throw on double two in the next leg, after Northern Ireland could not find a finish on 80. Two holds of throw followed, before Smith found double eight to break throw again and win the match 5-2, dumping the fourth seeds out of the competition.

Last year’s runners up Republic of Ireland are also out of this year’s World Cup in the first round. They lost a high quality affair 5-2 to Australia.

The Irish pair of William O’Connor and Steve Lennon started the better, breaking in the first leg. However, they O’Connor could find a 112 checkout to consolidate the break in the next leg, allowing Simon Whitlock to hit double nine to level up the match for him and his partner Damon Heta. A pair of holds left the game at 2-2.

The Australians then turned the screw to seal the match. After holding to lead 3-2, Heta hit double eight to secure a break of throw, after Steve Lennon found double 15 instead of double ten for what would have been a level game. Team captain Whitlock would then find double one in the next leg, to reel off three straight legs and book a place in round two.

Netherlands breeze into round two, but Belgium England and Scotland made to work hard

The Netherlands easily won their round one encounter on day one of the World Cup against Brazil.

Sadly for the Brazilian duo, that was as good as it got. A lovely 134 checkout from Michael van Gerwen, which included a tops tops finish, was the catalyst for the Dutch pair to wrap the game up. They broke throw again in the next leg, before Noppert would end the contest with a 60 outshot to win 5-1 and move into round two.

Belgium won arguably the game of the day in day one of the World Cup of Darts. They came from behind to beat Czech Republic 5-4.

Both countries held throw in the opening two legs, before the Czechs looked like they had seized the initiative. After both teams missed darts to take the third leg, Karel Sedlacek found double eight to win a crucial break of throw. Belgium missed a chance at bull to level in the next leg, allowing the Czechs to hold throw on double 16 to take a 3-1 lead. However, Dimitri Van den Bergh and Kim Huybrechts would not let the match get away easily. After holding throw in the fifth leg, they got the break back with a 14 dart hold, pinging double 16 for 3-3.

The crucial moment came in the seventh leg. There, Sedlaeck would miss three darts at a double to get the break once again and throw for the match, allowing Van den Bergh to hit tops to hold. Despite the Czechs holding to force a last leg decider, Huybrechts hit double 18 to win the match and move into round two. Belgium are yet to lose a first round match at the World Cup.

Number one seeds England came through a tough test against Philippines in day one. England would find a break of throw in the first leg, before three straight holds saw them lead 3-1. However, the Philippines, who lost to England last year in day one, would fight back. After holding in the fifth leg, Lourence Ilagan hit double 12, to level the contest up 3-3 for him and partner Noel Malicdem.

However, the Philippines pair lost their scoring in the next leg, allowing Rob Cross to find double ten for the third time in the match and break back to lead 4-3. Cross’ captain Michael Smith would end the match in the next leg, hitting double 16 to win 5-3 and see the four time winners England into round two.

Defending champions Scotland saw off a spirit display from Japan to book a place in round two.

The pairing of Robert Thornton and John Henderson, replacing Gary Anderson and Peter Wright who withdrew due to COVID-19 concerns, started brightly, breaking throw in the first leg. However, the Japanese would break straight back, before both teams held throw for a 2-2 game.

The match was decided in the fifth and sixth legs. Scotland missed six darts at a double in the fifth to break, and were almost punished. However, after Japan missed bull to hold, Thornton would find double 10 to break once more. Then, after Japan missed tops to break back once again in the next, Henderson would find tops to hold throw and take a 4-2 lead. Seigo Asada and Yuki Yamada would hold to trail 4-3, before Thornton would find tops in the eighth leg to win the round one contest.

Wales and Germany among five countries that produce whitewashes

Five whitewashes happened in round one of the World Cup of Darts. The highest profile came from number two seed Wales, who dispatched Russia with a very good performance.

Gerwyn Price and Jonny Clayton started well, holding and then breaking the Russians’ throw for a 2-0 lead. However, both Boris Kolstov and Aleksei Kadochnikov had chances to win the break back, as both countries missed multiple darts to win the third leg. In the end, Clayton hit double ten to take a 3-0 lead.

This would be the only mishap for Wales in the whole game, as they hit six perfect darts in the next leg in a bid to be the first team to hit a nine darter at the World Cup. In the end though, they settled for an 11 darter to break and go 4-0 ahead. Captain Price then cleaned up 42 to secure the 5-0 whitewash win.

Number six seed Germany easily swept aside Finland in their round one affair. The pairing of Gabriel Clemens and Max Hopp started well, hitting a 180, 140 and 130 in their first three visits to leave 51 after nine. Hopp duly finished for an 11 dart break, before holding to go 2-0 in front.

Despite missed darts in the third and fifth leg for the Fins to get on the board, the Germans were hardly stretched. Hopp would complete the whitewash by hitting double four, moving him and Clemens into the second round with relative ease.

Poland produced a clinical performance to knockout South Africa on day one. Team captain Krzysztof Ratajski was fantastic in particular, constantly taking out checkouts with his last dart in hand. It meant South Africa never got a shot at double the whole game, with Ratajski’s partner Krzysztof Kciuk hitting double eight to complete the whitewash.

Portugal won their debut game at the World Cup 5-0 against Hungary. Hungary did not get a dart at a double in the whole game, as team captain Jose de Sousa hit tops to seal the victory.

Greece were another country to produce a whitewash on day one. A 110 from John Michael in the first leg set them on their way, as Michael and Veniamin Symeonidis produced a stunning performance to beat Sweden 5-0.

What else happened on day one of the World Cup of Darts?

Host nation and number eight seeds Austria easily made it through on day one of the World Cup, beating the USA 5-2. The big moment came in the fourth leg, where both countries missed darts with the score at 2-1 to the host nation. There, Rowby-John Rodriguez found double three to break throw and move into a 3-1 lead. Rodriguez would finish the match in the seventh leg, hitting double 16 to see him and team captain Mensur Suljovic through to round two.

Lithuania came through a hard fought battle with Gibraltar in the opening game of day one of the World Cup of Darts. Trailing 4-3, the Gibraltar missed two darts to send the match into a decider. This allowed Lithuania’s Mindaugas Barauskas to hit double four and take a 5-3 victory.

Hapai Puha was the star for New Zealand in their day one victory over Denmark. Puha won all five legs for his country, hitting a 112 and 100 checkout during the contest. He ended the match by finding tops for a 60 outshot, winning the game 5-2 against the Danes.

Spain and Italy produced an epic World Cup of Darts round one game. The Italians took a surprising 3-1 lead, before the Spanish duo of Toni Alcinas and Jesus Noguera reeled off three straight legs to lead 4-3.

Alcinas then missed two darts for the match, allowing Daniele Petri would find double ten, to send him and partner Andrea Michieletti into a last leg decider. The Spanish would miss four more match darts, before Noguera found the madhouse double one to complete a stunning comeback. Italy are still yet to win a round one game at the event.

It was another epic in the final first round game of the day between Hong Kong and Latvia. The game saw eight breaks of throw, as the Hong Kong team of Kai Fan Leung and Royden Lam missed two darts to secure a round two place. This allowed the Latvians, who were last minute call ups to replace China yesterday, to win the contest. Trailing 4-3, Janis Mustafejevs stepped up to win back to back legs, meaning him and team captain Madars Razma will take to the stage tomorrow.