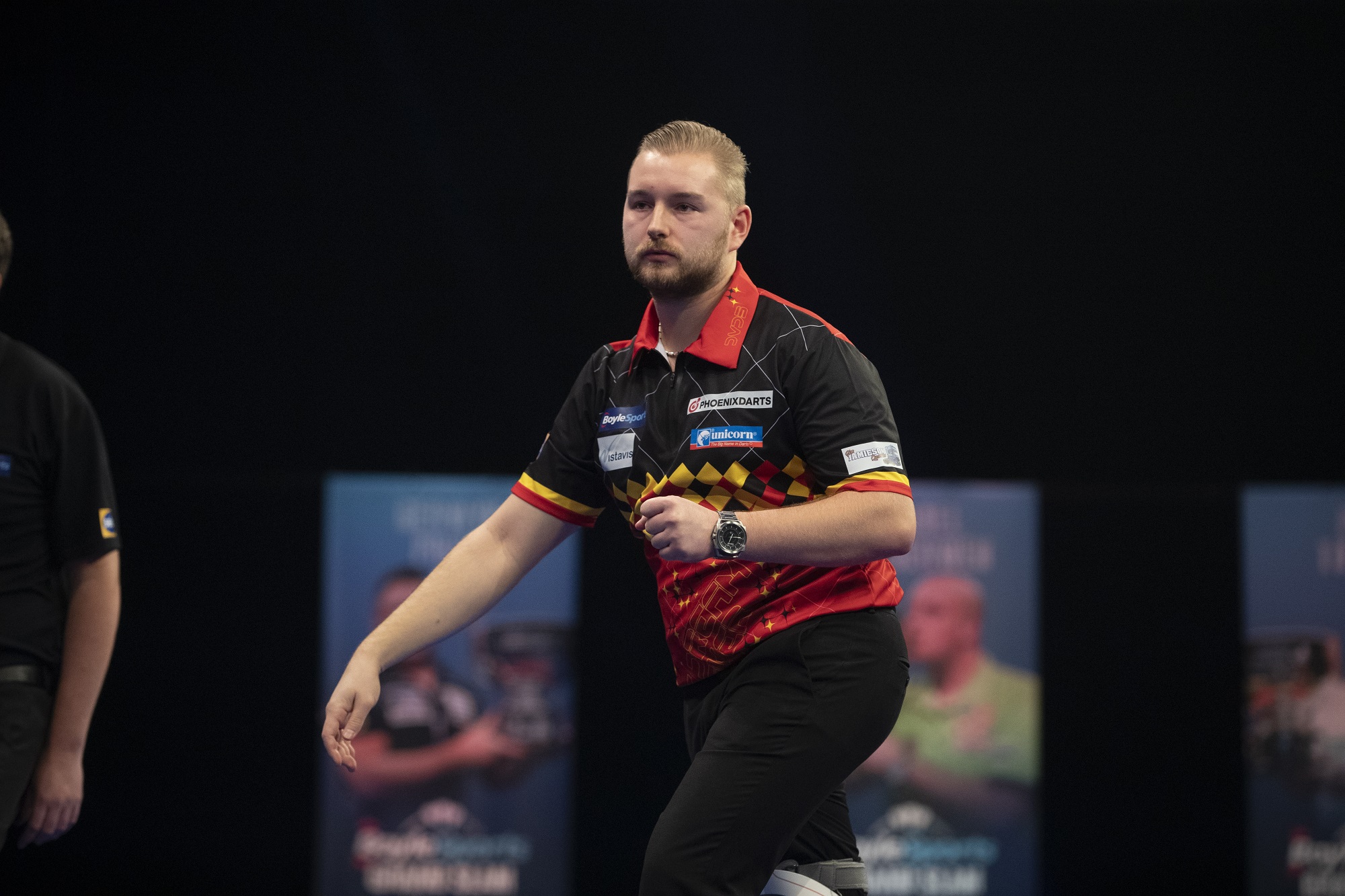 Dimitri Van den Bergh produced another stunning performance to move into the quarter finals on day five of the BoyleSports Grand Slam of Darts.

The World Matchplay Champion once again produced a ton plus average, thrashing Jonny Clayton 10-3 to move into the quarter finals. Van den Bergh has hit over a 100 in each of his four games this week.

Dimitri Van den Bergh was the first man into the quarter finals on day five of the Grand Slam of Darts. He produced a sublime performance to beat Jonny Clayton 10-3.

Van den Bergh picked up from where he left off in the group stages, starting brilliantly. He averaged over 121 in the first four legs, hitting three 180s to take a 3-1 lead. The Ferret though took advantage of a rare off leg from the Dream Maker, pinging tops for a 60 outshot to trail 3-2 at the first interval.

The Belgian got break straight back, hitting two maximums and an 81 on the bull to lead 4-2. After holding, he left 42 after nine on the Clayton throw, but missed five darts to take the leg. This allowed Clayton to find double 11 to hold once more, keeping in the contest at 5-3. However, after another hold from Van den Bergh, the Ferret eventually surrendered the double break. He missed tops for a 116 checkout, allowing the Dream Maker to clean up 50 and go into the second interval 7-3 ahead.

Van den Bergh quickly wrapped up the match after the second interval. A 14 and 13 darter saw him one leg away, before ending the contest with a lovely 110 checkout. He averaged 103.6 and hit eight maximums en route to victory.

Jose De Sousa won eight legs on the spin, before eventually crawling over the line 10-7 against Dave Chisnall on day five of the Grand Slam of Darts.

Chisnall started the brighter of the two men, hitting an 86 outshot for an 11 dart hold, before finding double ten to break and go 2-0 up. However, Chizzy then missed five darts to consolidate the break, allowing De Sousa to hit double ten himself to get the game back on throw. The Special One then found a 15 darter to hold, before choosing not to go for the bull to take a 3-2 lead. Chisnall then missed at tens, allowing De Sousa to ping double 16 and go ahead for the first time in the match.

That  double 16 seemed to inspire the Portuguese player after the interval. After a 15 dart hold, both players missed darts to take the seventh leg. However, De Sousa would find double ten for his fifth leg on the spin. He would soon extend that run to seven, with a 14 and 12 dart break on 98 see him go 7-2 ahead. The Special One would complete the second session whitewash, hitting double four to clean up 32 to take his eighth leg in a row, giving him an 8-2 lead at the second session interval.

However, Chisnall, much like his World Grand Prix appearance, would not go quietly. After holding straight after the restart, he capitalised on five missed darts from De Sousa at double to get one of the breaks back. The same thing happened in the next two legs, as the Special One missed four chances for a 9-5 lead. Chisnall broke again, hitting double five for to trail 8-6.

Chizzy then found his fifth leg on the spin, before missing a dart at double 18 to improbably level the contest. De Sousa cleaned up 61 to get his first leg in six, pinging the same double Chisnall missed for 9-7. Chizzy then missed the bull for a 170, while De Sousa did the same for 161. In the end, the Portuguese player cleaned up the 25 on double 12 to eventually win the contest, and make his first ever TV quarter final.

James Wade came through comfortably against Ian White, winning their last 16 encounter 10-4 on day five of the Grand Slam of Darts.

The first five legs produced little drama, with Wade throwing first. The only worry came in the third leg, where after two holds, Wade missed a dart at double ten to go 2-1 up. White could not capitalise, failing to find the bull for an 84 outshot, and The Machine cleaned up on double five to take the leg. Two further holds followed, meaning Wade would go into the first interval 3-2 ahead.

Two more holds followed after the interval, before Diamond missed three darts at double 20 to level once more. The Machine capitalised, finding a 52 checkout to get the first break of the match. However, fortunes would be reversed in the next leg. Wade missed tops for a 6-3 lead, and White punished, hitting an excellent 85 on the bull to get the game back on throw. However, he could not get the game level, missing double eight for 5-5. The Machine produced some top level Wadeing, find his beloved double ten to break once again and go 6-4 up at the second interval.

That break gave Wadey the impetus he needed to kick on after the second interval. He found his only 180 of the match in the 11th leg, winning it in 12 darts to go 7-4 up. In the next leg, he punished White for missing bull for a 161, finding an 84 checkout to get the double break.

Diamond almost got the break back immediately, but missed three darts in the 13th leg for 8-5. Wade then found double five, after missing four himself for the leg, before ending the match with a 68 checkout on his beloved double ten to seal a spot in the last eight.

Whitlock progresses despite under par performance

Simon Whitlock was miles from his best, but beat Adam Hunt 10-6 to qualify for the last eight on day five of the Grand Slam of Darts.

It was a nervy start for both players, as Whitlock missed four darts to take the opening leg. Hunt missed a dart at tops, before the Wizard found double one to get the break. Two holds followed, before Whitlock bust his score on 32. The Hunter, left on 86, could not find the bullseye to make the match level, as Whitlock hit double eight to hold. Hunt would go into the first interval just the one break down though, finding tops for a 13 dart hold to trail 3-2.

Crucial moments to get the break back came and went for Hunt in the second session. He missed four darts to break in the sixth leg, and a further three in the eighth leg, as Whitlock produced a 119 to take a 5-3 lead. The Hunter, who’d hit a 112 finish before to hold, then hit a 70 to trail 5-4. Whitlock then pinged tops for a 17 darter to win the session 3-2 and lead 6-4 at the second interval.

The final session saw plenty of breaks of throw, with four straight seeing the match go to 8-6. However, Whitlock would find a 180, followed by a 50 outshot to once again get a double break. The Australian would finish the match by missing seven match darts, before finding double five to end the contest.