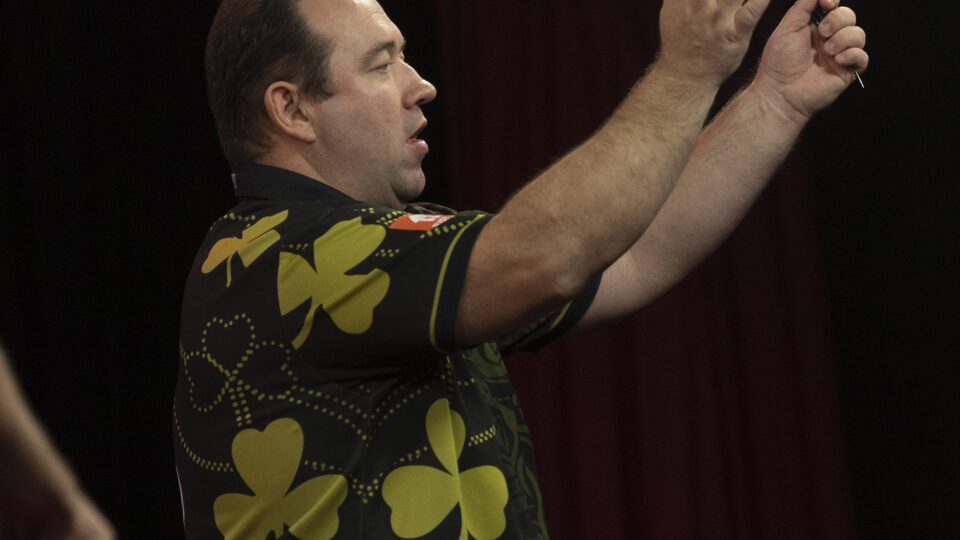 Brendan Dolan produced one of his biggest wins of his recent career to beat world number one Gerwyn Price at the 2021 Players Championship Finals.

After winning against Ritchie Edhouse in round two, The History Maker fought through to win 10-8, taking advantage of poor doubling from the World Champion to make the last eight of this event for the first time. He’ll play number one seed Jose De Sousa, who beat William O’Connor by the same scoreline.

Dolan stuns Price to take on De Sousa next

After losing a last leg decider at the 2020/21 World Darts Championship, Dolan reversed the script against The Iceman in Minehead.

Price started the better of the two, winning three of the first four legs and looking comfortable. However, he then missed his next 24 darts at a double, as Dolan took advantage.

The History Maker won four legs on the spin, before Price eventually found double one to stop the rot. Dolan would still go into the second interval in front though, as he hit 74 to take a 6-4 lead.

Both held twice, as Price could not get close to Dolan on his own throw. The History Maker then missed a dart for The Big Fish 170 outshot, allowing The Iceman to hit double six to move one behind at 8-7. However, Dolan kept calm under pressure, and with holds of 65 and then tops, won the match to knock the pre tournament favourite out.

Dolan takes on De Sousa in the last eight, after The Special One beat William O’Connor 10-7. De Sousa also survived match darts in round two, coming through Darius Labanauskas 6-5 in round two.

O’Connor got the early break of throw in the third leg, but De Sousa broke back in the fourth to level at 2-2. 34 darts later the 2020 Grand Slam champion went ahead 4-2, as he looked to take control of the match.

Three holds followed, before De Sousa missed double 12 for a nine dart leg in the 10th. He then lost it, as O’Connor took out 60 to make it 6-4 at the interval. The Magpie broke after the restart, before missing double 16 to level the match. De Sousa then found double seven to keep two clear.

Both players held twice, before The Special One hit double eight to seal a place in the last eight at this event for the first time.

Wright fought past Heta in the opening match of the Main Stage on Saturday night. Snakebite also came through 6-5 against Adrian Lewis, in a bad tempered game earlier in the day.

Heta held in the first leg, before hitting a 90 checkout to find the first break. Three further holds followed, meaning The Heat took a 4-1 lead into the opening interval.

Both held after the interval, but 30 darts later, Wright was back in the contest, as the World Matchplay champion won two legs to get the game back on throw. Despite that though, Heta would still be ahead at the second interval, hitting an outstanding 164 for a 6-4 lead.

Snakebite responded though out of the interval, hitting a 12 darter to get the game back on throw. However, the big moment of the match came in the 15th leg. Heta missed tops for an 82, and Wright punished, hitting a 130 outshot on double five to take the lead for the first time.

Both held once more, but the former Brisbane Darts Masters winner could not get close to Snakebite in the 18th leg, as Wright took out double ten for the victory.

Wright will play old rival Michael van Gerwen in the last eight, after he beat Gary Anderson 10-6. MvG won against Raymond van Barneveld in the second round.

The big moments in the match came in the first and third legs. Anderson missed eight darts in those two legs to hold, allowing MvG to build up and 4-0 lead. Eventually, The Flying Scotsman hit double four in the fifth leg to trail 4-1 at the first interval, as he ended the session 1/11 on the outer ring.

Both players held throw in the second session, giving the six time champion of this event a 7-3 lead at the second interval. Anderson continued to hold, before breaking in the 14th leg to cut the gap to two at 8-6.

However, the 2014 winner of the event missed five darts to make it a one leg game, but squandered them. Van Gerwen found 32, before hitting 36 to close out the victory.

It looked like that The Ferret would cruise into the last eight, after he started the match superbly. He took out a 110 outshot in the 10th leg, to go 7-3 up.

However, the UK Open runner up would not go down without a fight. After both held, Humphries produced a magical spell. He won five legs on the spin, as Clayton missed big darts to make the game more comfortable.

In the penultimate leg, Cool Hand missed tops for the come back, as Clayton hit double 16 to force a decider. Both missed darts to take it, but The Ferret eventually found double five to end a gripping contest.

Clayton will play Vincent van der Voort, after he cruised to his first quarter final at this event since 2014. He beat Danny Noppert 10-5, having come through Andy Boulton 6-5 in round two.

Both held in the opening two legs, before each broke their opponent’s throw to make it 2-2. However, Van der Voort would take control of the match from there. It took him 44 darts to win three legs, before Noppert looked to get back into the game, breaking in 15 to cut the gap to 5-3.

However, a 15 dart break, followed by a 14 dart hold, gave The Dutch Destroyer a 7-3 lead at the interval. Noppert would not go away though, getting the game back to 7-6.

Van der Voort kept calm though, holding in 15 and 13 legs to go within one, before hitting double 10 to book his spot against Clayton.

Gurney and Searle square off

Daryl Gurney made the last eight of the Players Championship Finals once again, coming through James Wade 10-7 in the third round. The 2018 champion survived 10 match darts against Michael Smith in the afternoon.

Both players started the match well, holding three times. However, in the seventh leg, Wade missed tops for a 101, and Gurney pounced, finding a 72 to go 4-3 in front. He kept the break until the interval, hitting double six in the 10th leg for a 6-4 advantage.

The two players continue to hold out of the interval, with Gurney leading 8-6. The 15th leg however was the game changer in the match. The UK Open champion missed double 19 for a 118, and Superchin, who missed the bull for a Big Fish 170 checkout the previous visit cleaned up 25 to go one away.

Despite an excellent 144 from Wade in the next leg, it only delayed the inevitable, as Gurney hit 72 to make the last eight, averaging 104.30 in the process.

Superchin will play Searle in the quarter final tomorrow, after Heavy Metal beat Rob Cross 10-7 in the opening match on Stage Two. Searle survived match darts against Ryan Joyce in round two.

Cross started the match better, breaking on double four in the opening leg. The break lasted until the fourth leg, when Searle with a 14 dart break to level at 2-2.

Two further breaks followed, as did two holds, before Voltage pinged in a 161 outshot to go 5-4 up. Once again though, Heavy Metal responded, breaking in 14 darts to make it 5-5 at the interval.

The pair held twice once play resumed, with Heavy Metal surviving three darts from Voltage to win the 15th, holding again to go in front. He then broke to go one away from the match, before both missed five darts to win the leg. In the end Searle found double one to secure his first ever quarter final place at the Players Championship Finals.