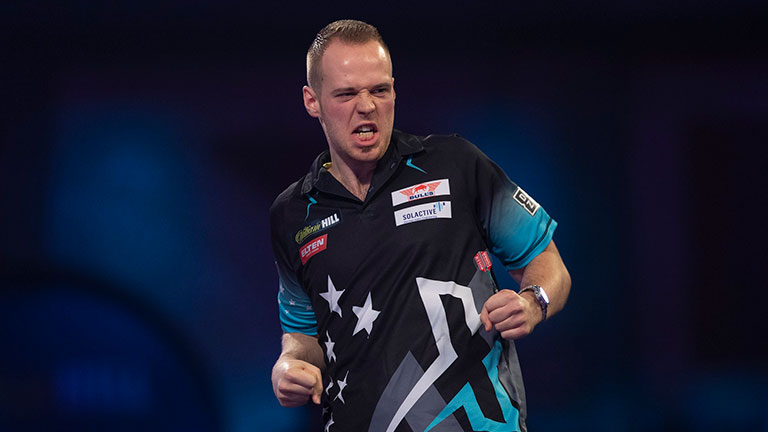 Germany’s Max Hopp secured his place in the 2020 European Championship on day one of the International Darts Open.

The German beat Holland’s Jelle Klaasen 6-1 in Riesa, as the final event of the European Tour got underway.

Joining him in next week’s event in Oberhausen will be fellow countryman Gabriel Clemens. The German Giant beat Philipp Hageman by the same scoreline.

Elsewhere, day one of the International Darts Open saw:

Five Germans win on day one of International Darts Open

The top two Germans came through their games comfortably on day one of the International Darts Open.

Max Hopp was drawn to play Jelle Klaasen, in what some were billing the game of the round. After sharing the opening two legs, Hopp found a break of throw, hitting double top for a 52 checkout and a 2-1 lead.

Two straight legs soon became six straight. The Maximiser steamrolled through the game, consistently outscoring his opponent. Hopp went 5-1 up before The Cobra had a chance at a double again, missing tops for 5-2. Instead Hopp comfortably found double four to win 6-1 and seal his place in Oberhausen next week, and will face last week’s winner Jose de Sousa in round two.

Joining him in the draw is World Cup partner Clemens. He beat fellow German Philipp Hageman 6-1 as well, having a comfortable ride into the second day. Clemens started the brighter, holding throw and then breaking, after both players missed chances for the second leg. Both held throw each, taking the score to 3-1.

From there, Clemens came on stronger, comfortably holding in the fifth leg before producing a 102 checkout to go 5-1 up. Clemens would then finish the match with a stunning 167 outshot to win 6-1 and average 99.5 in the process. He will face Mensur Suljovic tomorrow.

Three more Germans also won on day one of the International Darts Open:

Plenty of other players were looking to make a bid for the European Championships today.

Ron Meulenkamp moved up into the provisional 32 seed after day one of the International Darts Open. He came through 6-2 against Home Nation Qualifier Michael Rosenauer. Meulenkamp will face Dave Chisnall in round two.

Jason Lowe is just behind him, after beating Scott Marsh 6-5 in the game of the day. The opening game of the tournament saw both players miss match darts in a classic Euro Tour game. Lowe will play Nathan Aspinall tomorrow evening.

Andy Hamilton also kept his hopes alive with a comfortable 6-2 victory over Simeon Heinz, while Madars Razma remains in the running after a hard fought 6-4 victory over Kai Fan Leung. The Hammer’s next opponent is the returning Stephen Bunting, while Razma will play Michael van Gerwen.

Steve West though has also all but guaranteed his place, as he beat Toni Alcinas 6-3 in the afternoon session. West will play Jamie Hughes first up tomorrow afternoon.

What else happened on day one of International Darts Open?

Martijn Kleermaker had already secured his place at the Euros, but very nearly lost to debutant Arsen Ballaj. The man born from Albania missed seven match darts, as Kleermaker eventually got over the line 6-5 to avoid a shock defeat. He’ll face Krzysztof Ratajski tomorrow evening

Elsewhere, Ross Smith produced a stunning 112.9 average to beat Michael Vandenbogaerde 6-1. He’s got some work to do if he wants to make it back to the Euros this year, after defeating Michael van Gerwen in round one in 2019. He will face Gerwyn Price tomorrow evening.

Finally, Danny Noppert continued his good run of form as he beat Sebastian Pohl 6-1, while Andreas Harrysson defeated Benito van de Pas in the afternoon session. Noppy gets the returning Adrian Lewis in round two, while Harrysson will face James Wade in the penultimate game tomorrow afternoon.