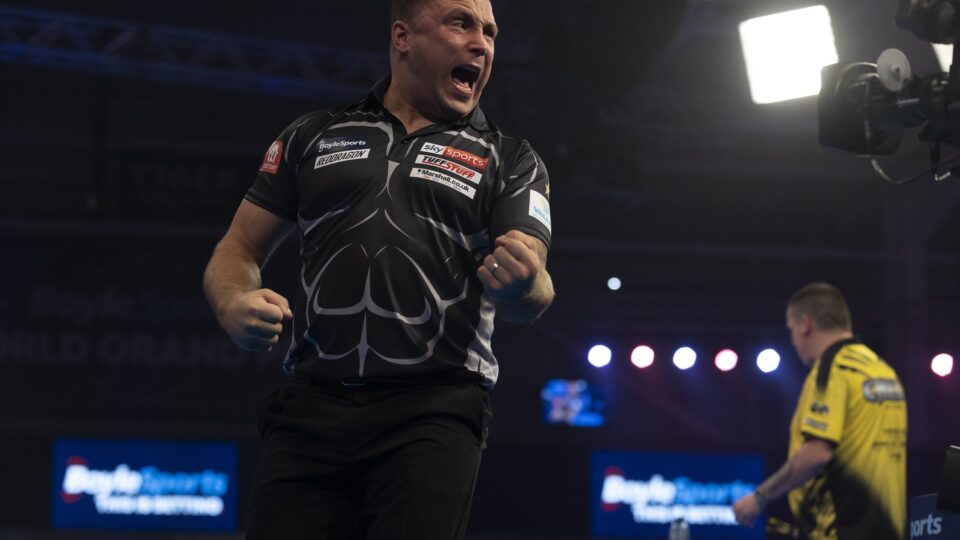 Price and MvG win on day two of European Championship.

Gerwyn Price and MvG both win 6-2 to make it through to the second round, with wins against Ritchie Edhouse and Boris Krcmar respectively.

Elsewhere on night two at the European Championship;

The Welshman set his stall out straight away with a break of throw and three straight holds in the game, Price finishes 80 in two to break again before the interval to lead 4-1.

The Iceman continued the impressive performance after the break with a 13 dart hold of throw. He should of wrapped it up in leg seven but missed three at tops before another 13 dart hold to beat Edhouse 6-2.

Gerwyn Price will play Adam Gawlas on Saturday in Salzburg

Gawlas controlled this game from the start and even the highest checkout of night from Murnan a 167, couldn’t stop the Czech star progressing with a 6-4 win. Adam Gawles averaged 88 and will know huge improvements are needed if he’s going to get the better of Price.

MvG eases into the second round

The Green Machine started the game with an 11 and then a 12 dart leg finished with a 128. He then had the opportunity of another 128 and wired the bull before coming back to clean it up and also taking the fourth leg.

Boris was able to get the his first leg on the board in the 5th and followed it up with another in 7th leg, however it was a clinical performance from Michael who had a 55% percentage on checkouts and a 100 average to set up a tie against James Wade.

James Wade wins a last leg decider against Adam Smith-Neale. It looked like it was going to be a dream debut for Smith-Neale who lead 3-1 and 4-2.

The Machine then stepped up his performance to win 3 legs on the spin and throw for the game. Smith-Neale wasn’t done and finished a 88 finish on the bull to set up a last leg decider and with the throw.

A slow start to the leg from Smith-Neale allowed Wade to punish and after firing in a 180 with his second throw, he then went on to win the leg with ease and wrap up the win.

The game of round one saw Ryan Searle beat Michael Smith in a last leg decider to set up a clash with Danny Noppert.

Michael Smith started the game in good form with the first three legs. Searle than stepped it up another gear winning 4 of the next five to level things up. It was leg eight which seemed to be the turning point with Smith missing bull for a 170 for a 5-3 lead. Ryan Searle did hit the bull in taking out a 121.

The last three legs went with throw which meant Heavy Metal won a game in which both players averaged just short of 102.

Talking of 102 averages, Danny Noppert averaged just that in a comprehensive 6-2 win over Krzysztof Ratajski. Both players came into this game in tremendous form and after four legs they couldn’t separated.

The last leg before the break Ratajski missed double ten to go into the break 3-2 up and Noppert punished with a 13 dart break.

Noppert continued that good form after the break and won the next three legs to make it five legs in a row to book his place into the second round.

Mervyn King the only player to compete in every European Championship matched Nathan after the first six legs with all going with throw.

The pendulum than swung the way of Asp who was able to break King, before Merv fired back with a 126 to make it 4-4. Nathan Aspinall didn’t allow that to knock his performance and he reeled off the last two legs to set up a second round match against Damon Heta.

Damon Heta beats Gabriel Clemens 6-3 in the final game of round one.

Clemens started the game with six perfect darts then went on to miss eight at a double which saw Heta take leg one. Damon then won two of the next three legs before Clemens fired in a 126 checkout to close the deficit to one going into the break.

After the break Damon Heta found another gear to win the last three legs and wrapping it up with a 96 checkout. The Australian will be happy with the win on his debut in this tournament.

Schedule of play for 2021 European Championship