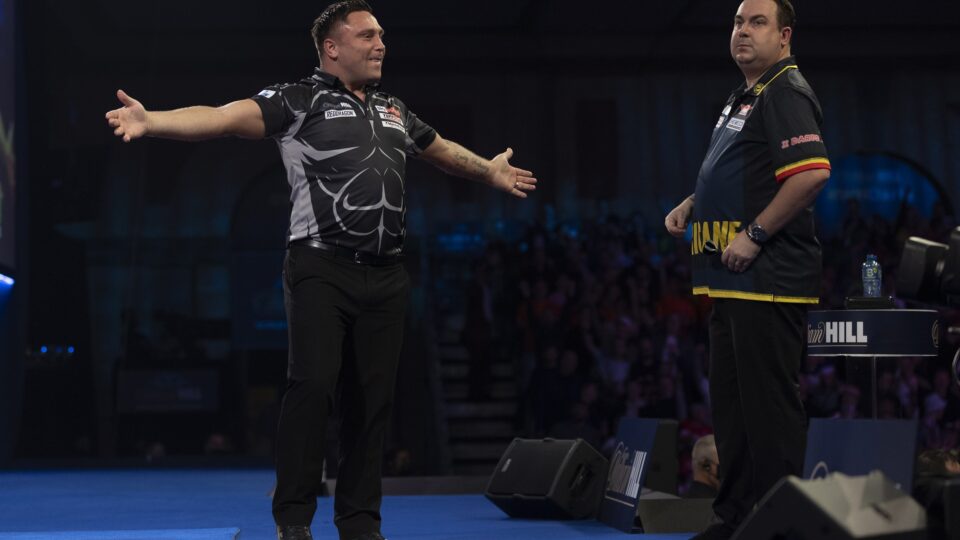 Gerwyn Price triumphed over Kim Huybrechts in PDC World Championships epic. The match went all the way to a last leg in which The Iceman pinched the match with his last dart.

His Welsh teammate Jonny Clayton rolled over Gabriel Clemens in a comfortable win.

Elsewhere on Day 10 of the PDC World Championships:

The first set was a marker for Price. Kim missed a dart at D16 for a 103 and was punished. Gerwyn then hit a 109 of his own and cruised to a whitewash set. Huybrechts bit back though. Nailing a 98 out and backing it up with an 11 darter, the Hurricane was in a strong position. He missed a dart at tops in leg four, but returned in leg 5 to produce a sensational 147 to level the game.

Doubling disasters entered the third set. Price missed six darts and handed Kim a 2-0 lead. Huybrechts himself then missed three at D16 and Price got back to 2-2. Huybrechts silenced the Iceman with a magical 120 to move ahead 2-1 and let him know with a mighty celebration. Despite the hard work, the Iceman brushed Kim aside to win the next set and it was level once more.

A 112 and 120 out helped Price to a 3-2 lead, but Huybrechts sent us all the way to a final set. We went all the way to a deciding leg. The Hurricane blew a lot of chances, missing multiple darts at D10, D16 and D9 which would all have seen him break throw. All that is academic though, as Price finds a 76 out last dart in hand to silence a rowdy crowd and meet Dirk in the next round.

The game had everything, 17 maximums and eight 100+ outs. We even had a bit of needle in the last set… but after it all, the World Champ survives.

The first set was pretty easy for Jonny. Despite missing ten darts at a double, he was still average a ton. Clayton then had a 12 darter followed by a 10 darter in the next one. Hiss missed doubling came back again, but he pinned thee bull for a 121 and to double his lead.

Clemens found a tidy 114 to break in the third, but was countered by a D17-D20 combination from the Ferret. A handful of missed doubles gives Clemens a chance in the set, but the scoring is too strong for the German.

The fourth set gave Jonny his second 121 of the match and he was in cruise control. The Giant looked defeated and he was right, a 110 out to seal the victory and book him a tie with Bully Boy. Also worth noting that he missed 20 doubles and still averaged 102.

Dirk van Duijvenbode came from 3-0 down to eliminate Ross Smith from this year’s PDC World Championships. It was a reckless performance from Dirk who hit ten maximums but also missed 35 darts at a double.

Smith took the first set quite comfortably, but had to pull out a massive Shanghai 120 out to snatch the second set. A 3-0 lead came after a sloppy turn from the Dutchman allowed Ross to pinch D9 last dart to claim a strong advantage.

Then it all went wrong. Smudge missed a big 16 that would’ve given him a dart at tops for 4-0. Dirk punished that and made it 3-1. Smith then only won two of the next 11 legs, albeit including a 126 checkout.

Van Duijvenbode stepped on the gas and will be in the last 16.

Bully boy had all the answers to William O’Connor today as he got over the line 4-2.

He coasted his way to 3-1 in sets before O’Connor battled well to move to 3-2. It was getting a little scrappy in the final set but his sixth match dart found his friend the D5. Ten maximums and a 97 average still put Bully Boy as the in-form man of the tournament.

Raymond Smith is now just one win away from achieving a tour card to join the PDC. The Australian beat Florian Hempel 4-1 and will meet either Steve Lennon or Mervyn King in the next round.

The Guru took out 102 for the first set and cruised to a 2-0 lead without much pressure from the German. Hempel did grab a set to move within one, but Smith never really looked nervous at any point in the match.

He hit four maximums and averaged just shy of 95. He is still a massive outsider, but his performances thus far show he can be a threat to everybody.