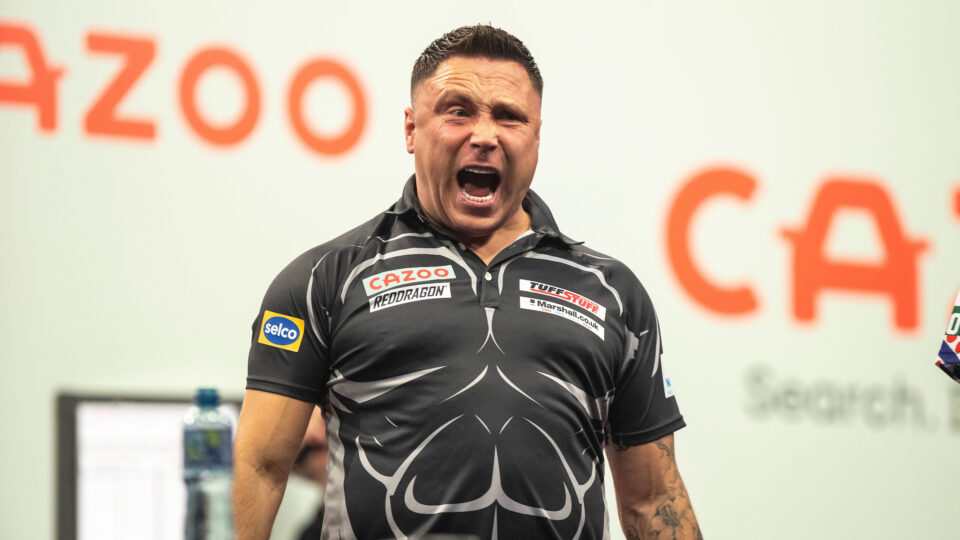 An incredible night of action at Aldersley Leisure Village gave us our first four quarter finalists. Raymond van Barneveld, Michael Smith, Gerwyn Price and Joe Cullen were able to make their way through. Some incredible close games and some wonderful stories.

Raymond van Barneveld was the first through as he withstood a barrage from Simon Whitlock. The opening session saw all 5 legs completed in less that 5 visits, with Whitlock going into the interval a break up courtesy of a 14 dart opener. He followed this with 12 and 15 darters, Barney striking back in 13 and 15 himself to keep in touching distance. Session 2 produced more incredible darts as ‘The Wizard’ stretched out to 5-2. A 13 dart hold followed by a 14 dart break. Prophetically Mardle stated Barney had to hang in and assume Whitlock couldn’t possibly continue at that level.  Barney began his comeback with a 16 dart break, which will have disappointed Whitlock, he would fully expect to complete in 6 visits. A 15 dart hold and a 14 darter against the throw ensured parity at 5-5 at the second break.

Barney hit the front for the first time with a 12 dart hold, however, Whitlock struck back immediately and the pair shared the following 5 legs to reach 8-8. Leg 17 was the poorest and nerviest of the entire contest. Both struggled to score as the tension hit with both spurning chances to win the leg before Barney fell to a 21 dart hold. The 18th and as it proved final leg was in contrast the best leg of the game. Both players left finishes after 9 darts, Whitlock on 130 and Barney on 81. Whitlock had first poke and fired the two trebles needed before an agonising miss. This let in the Dutch legend who did not need a second invitation. He sank his final dart into the heart of the bull to end a thriller!

Michael Smith got over the line in another fantastic match with former World Champion Rob Cross. Smith flew out of the traps taking a 4-1 lead into the first break. He only found one max but with Cross even more subdued Smith was able to cruise into a solid lead. Cross did manage one 12 dart hold but that was as good as it got. Following the break Smith would have hoped to win 3-2 on throw but Cross had other ideas. Finding his scoring and finishing, Cross found 15, 14 and 12 dart legs to pull within 1. Smith collected himself to hold in 14 to maintain a lead at the break.

Sharing the next two legs, Smith then broke to lead 8-5. Again, Cross could not be subdued, finding a streak of 15, 15, 14 to bring the game level at 8-8. Smith found a 177 to open leg 17 and followed with steady scoring to break to throw for the match in 14 darts, an 11 capping an awful leg from Cross. Smith held throw to seal with win in 18 darts, however, Cross will be frustrated that a 5 visit leg would have forced a decider.

Both players will be left wondering how Price won this Wolverhampton classic. Price seemingly unable to get back to parity until the dying stages of the game where he pulled himself through in spectacular fashion. Having held in the opener, Price soon found himself 3-1 down. Noppert finding legs of 15, 14, 14 to take an early lead. The following six legs were shared to take us to a refreshment break with a 6-4 lead for UK Open Champion ‘The Freeze’. Price producing 11 and 13 darters but unable to find the necessary break.

When Noppert opened the final session with a 14 dart break, the writing looked on the wall.  Price a man who has never lost at this venue looked rattled. However a brilliant 13 dart break back and 15 darter brought him back within 1 at 7-6. Noppy produced a solid 16 dart hold to move within two. This was where Price invoked the spirit of his previous triumphs. An 18 dart hold following a miss from Danny and a majestic 164 finish restoring parity. With the roar, Price became like a runaway train, rolling through the final two legs in 13 and 15 darts to complete a stunning win.

Joe Cullen comfortably moved into the quarter finals with a routine win over an off colour opponent. Dirk would openly admit he never got going here as Cullen rolled him inside 15 legs. The first two sessions sealed this game as Cullen moved into an 8-2 lead. Cullen produced some excellent darts including a magnificent 10 dart leg to move to a 4-1 lead at the first break. Dirk is the biggest 180 hitter on the tour but he was abject here. Many trebleless visits and sub 60 scores ending his hopes here. Cullen did produce a 12 darter in leg 9 but around this was able to cruise into the lead.

A 14 darter to open the last session moved ‘The Rockstar’ with one leg. ‘The Titan’ did mange to win two more legs, an 18 dart break and a 14 dart hold. Sadly for Dirk, two misses at double four summed up his night and Cullen stepped in for an 18 dart hold of throw. In truth, this put Duijvenbode out of his misery, even the consolation legs at the end were more Cullen stuttering. Sometimes when so far back, players can produce freewheeling brilliance but not here. Cullen can look forward to another game with Michael Smith, where he will hope to avenge his 5-1 group defeat. 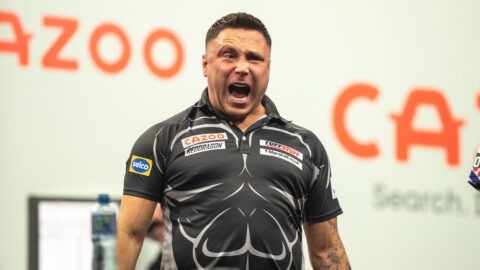 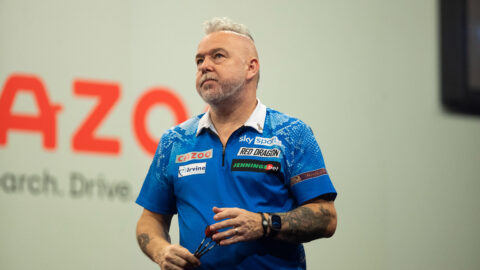 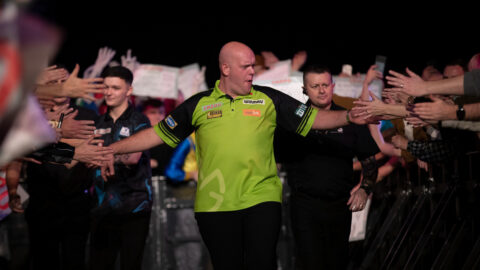 🗣 @NathanAspi on that HAND GESTURE | It was no gest at Jermaine. I did it, shouldn't have done it

Aspinall was frustrated with his own performance

🚨 Thursday at the Grand Slam🚨