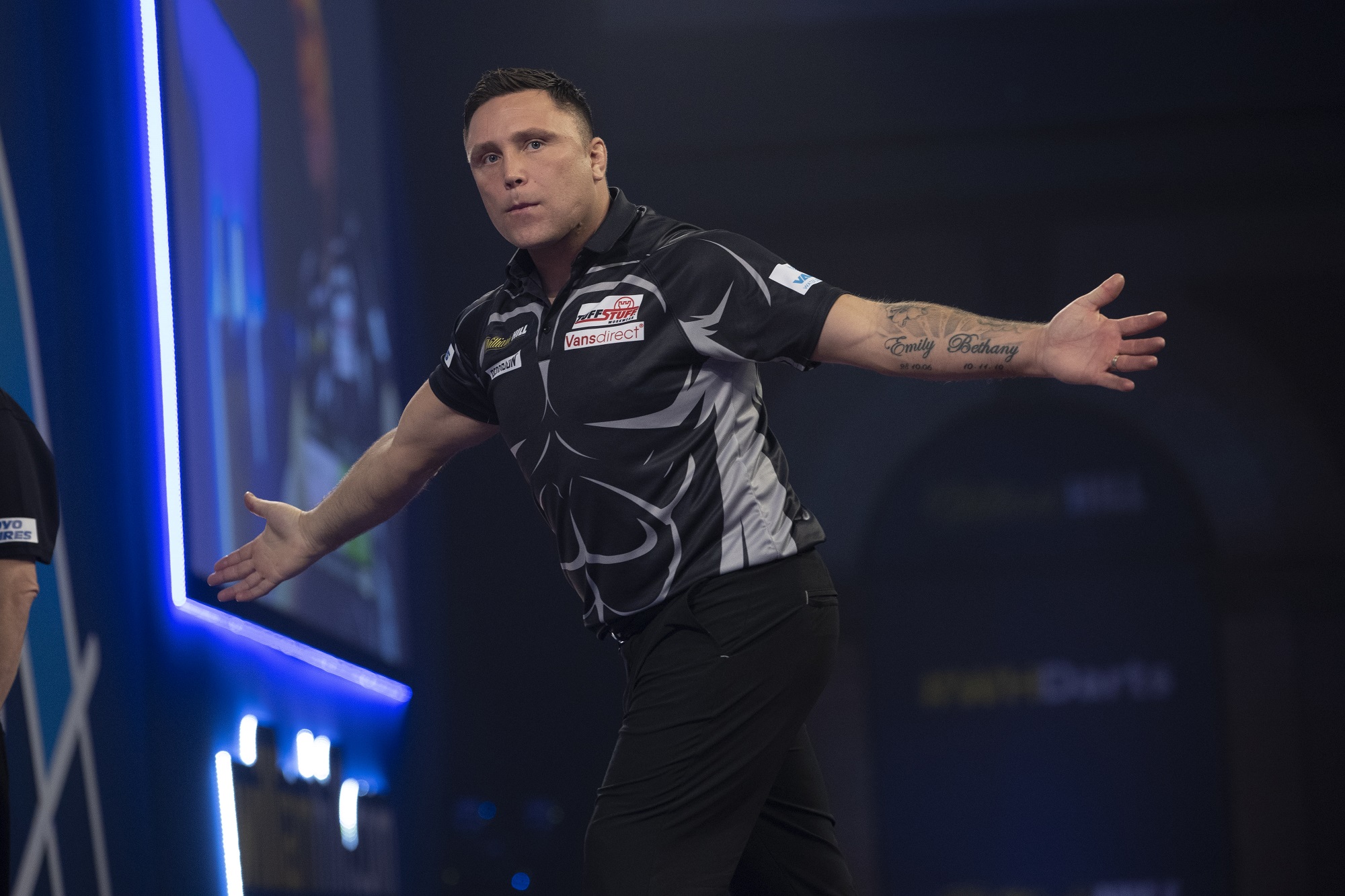 The Iceman and Fireball were level at two sets all, but crucial mistakes from Lewis saw him concede the advantage to Price, as the world number three won his round two game 3-2.

Price came into this event knowing if he wins it, he’ll become world number one. For a while though, it looked like he would be going home at the first hurdle. He averaged just 77 in the first set, as Lewis took advantage, reeling off three straight legs to take the set 3-1.

The Iceman looked more in control of the match in the second set. After going 1-0 down, it was his turn to turn the set around, going 2-1 in front and throwing to level. Lewis missed a 141 to take the set to a deciding leg, with Price finding a 100 finish to make it 1-1.

The world number three then started and ended the third set with monster checkouts. A 104 in the first leg, followed by a fantastic 160 outshot in the fourth saw him go 2-1 up and look in control. However, a 110 from Lewis at the start of the fourth set sent him on his way, as he whitewashed Price 3-0 to set up a decider.

Lewis was first to a finish in the first leg of the fifth, however he bust a score of 68 on treble 16. Price, left on 72, found it on tops with the last dart in hand, letting out a huge roar. Fireball did not let that bother him though, and left 32 after 15 darts, but missed all three darts at double 16. The Iceman then produced the shot of the match, hitting a 116 for his fourth ton plus out of the contest. That then seemed to finally crack Lewis, as Price found a 14 darter to come through a tight contest and make round three.

The first set foreshadowed what was to come in the match as a whole. White’s power scoring saw him regularly get close to winning legs, but could not find the doubles to get over the line. Seven missed darts in the opening two legs saw Huybrechts take a 2-0 lead, and despite a 127 outshot from Diamond, the Hurricane responded with a 121 of his own to take the set 3-1.

Huybrechts went 2-0 up once again in the second set, before White found a 56 checkout and then an 11 darter to level at 2-2. However, the Belgian took advantage of three missed darts for the set from Diamond, finding double 16 to go 2-0 up in the match despite White averaging 108.

The Hurricane went slightly off the boil in set three, as White broke in the opening leg, before holding twice to take the set 3-1 and trail 2-1. The fourth set was level at 1-1, when White missed four darts to hold, allowing Huybrechts to find a 39 outshot to break. Diamond would break straight back, but a fantastic 13 dart leg against the darts saw Huybrechts win the set 3-2 and the match 3-1. It’s the fourth time in five years he’s made the last 32, and will face Ryan Searle next.

What else happened on day seven at the World Darts Championship?

Krzysztof Ratajski produced one of the best TV performances of his career to see off Ryan Joyce 3-0 in the first game of the night.

The first set saw both hold throw twice, including a 126 checkout from The Polish Eagle, to force a deciding leg. There, Ratajski produced a lovely 91 outshot for a 15 darter to win the opener 3-2.

The second set started off with as much quality as the first set, with three straight 13 darters to hold. Ratajski would level up with a 17 darter for a second straight deciding leg, where he showed his class. He hit a 139,180 and 134 to leave 48 after nine darts, which he took out with ease for an 11 darter to win another set 3-2, this time against the darts.

Joyce would find an excellent 110 checkout in the third set to level it 1-1, but he missed bull for a 126 in the next leg to break. Ratajski, who’d missed two at tops prior, found double 20 to hold, before producing a 15 darter to win the set 3-1 and the match 3-0. It’s the second straight year Poland’s number one has made round three.

It was Kurz who had the advantage in the first set, hitting three 180s and 115 to take a 2-1 lead. However, the German Giant would level, before Kurz missed bull for a 121 for the set. Clemens then hit double 16 for a 14 darter to steal a set against the darts. Despite this, Kurz did not let that bother him. Magical checkouts of 160, plus 123 and 161 both on the bull, saw him level up the contest at one set all.

The number 31 seed Clemens though took advantage of huge mistakes from Kurz to win the third set. Trailing 2-1, Kurz would miss five darts at double to take into a deciding leg, where he had the darts. Clemens then found double five for a 19 dart hold to take a 2-1 lead.

Clemens then pressed home his advantage at the start of the fourth set, hitting a lovely 108 checkout with Kurz poised on tops to break. Despite missing five match darts, the German Giant found double 16 for a 16 darter to close out the fourth, winning the set and the match 3-1. Clemens will play World Champion Peter Wright in round three.