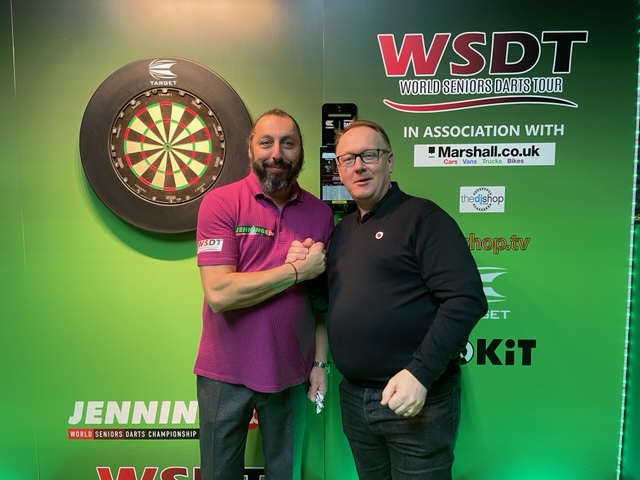 Richie Howson will be at the Circus Tavern for the Jennings Bet World Seniors Darts Championship.

The Owl came through a quality field at the Crucible club in Reading to book his spot in the 24 man-field in February.

Upon qualifying, the 55 year old from Romford even quipped with Helen Chamberlain saying “2 minutes walk from my house, happy days”.

Howson beat a host of names from yesteryear to qualify. starting the day with a 5-1 victory over Ronnie Baxter.

He was the the first man in to the last 16 after a 5-0 whitewash over Paul Holloway, before victories over Mark Hylton (5-2) and Brain Dawson (5-4) saw him into the final 4.

Colin McGerry, the winner of the warm-up event last night, was Howson’s opponent in the Semi-Final. He was defeated 6-4 to set up the final with Ian Moss.

The Final was a great battle between two friends. Ian Moss took the early advantage leading 4-2. A lovely 167 contributing to that lead. Howson hit back with a 154 of his own 3 legs later, starting a run of winning 3 consecutive legs won.
The match went all the way to the last leg, where a checkout of 34 booked Howson’s spot at his local!

The Man of the Moment 🦉🎯

Tomorrow the field will once again battle down to the last man standing in an attempt to seal the final qualifying spot for the Seniors World Championship.

Tickets for the event are still available. You can purchase them here.