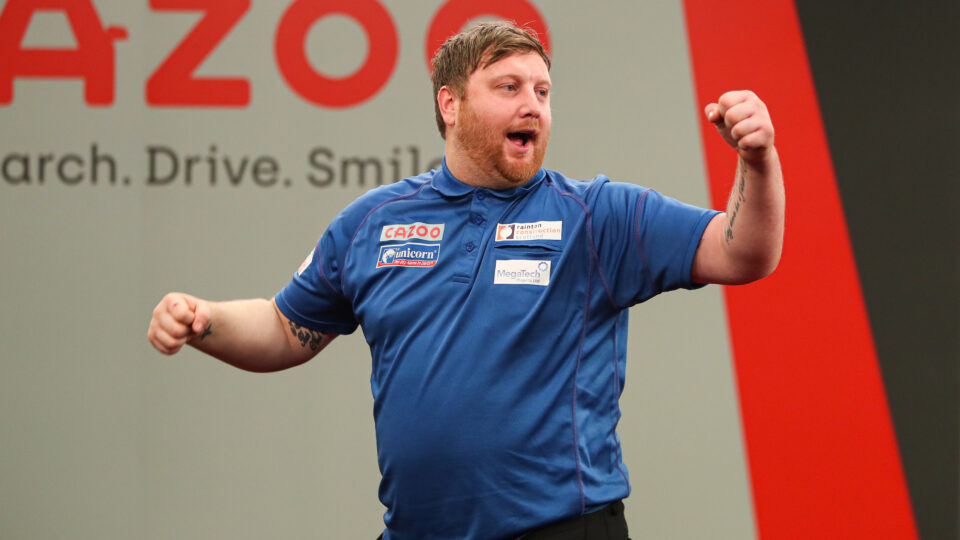 Gerwyn Price, Michael Smith, Nathan Aspinall, and Damon Heta were among the big-name players knocked out on Friday at the Cazoo Players Championship Finals in Minehead.

The first day of the £500,000 event saw 32 first round ties played over one marathon darts session, and the tournament was blown wide open when four of the top eight seeds crashed out at Butlin’s Minehead Resort.

Ryan Joyce sent out world number one Price after he blew three match darts in a dramatic last-leg match on the Main Stage.

Joyce, who led 3-0 at one point, missed three match darts before winning on double eight, and he now faces a resurgent Jermaine Wattimena, who defeated Brendan Dolan in his opener.

Elsewhere, newly crowned Grand Slam of Darts champion Michael Smith was knocked out in the first round by Ritchie Edhouse, who defied a 12-point difference in averages to secure one of his biggest wins of his career.

Smith, who averaged 98, led 5-3 before Edhouse reeled off three consecutive legs to win, and the Enfield ace will face Dimitri Van den Bergh for a spot in round three after the Belgian defeated Martin Lukeman.

Ricardo Pietreczko of Germany caused a major upset on his TV debut, defeating top seed Damon Heta in a deciding-leg tie to set up a showdown with Callan Rydz, who defeated Madars Razma in a similar fashion.

In other results, third seed Nathan Aspinall was defeated 6-4 by Martijn Kleermaker, and the Dutchman will face Matt Campbell for a place in the last 16 after the clinical Canadian defeated Steve Beaton.

Six-time champion Michael van Gerwen, on the other hand, avoided the same fate as his main rivals, reeling off three straight legs to win a high-quality battle against Suffolk’s Ryan Meikle.

Van Gerwen – chasing a record-extending seventh title at this event – closed out a 6-3 victory to create a tie against Cameron Menzies, who impressed in defeating Josh Rock by the same scoreline.

“It’s only a short format so you have to play your best if you want to win games,” reflected Van Gerwen, who averaged 102 and converted six of his 11 attempts at double.

“Cameron Menzies is a good player and when he’s on it, he can do some real damage, but I don’t care who I play, you have to beat them all to win this tournament.”

Danny Noppert delivered the opening-day performance of the season in Minehead, converting stunning 140 and 164 finishes in consecutive legs to complete a 6-1 demolition of Simon Whitlock.

Ross Smith dispatched debutant Gian van Veen with a flawless display of finishing, converting all six of his double attempts to set up a mouth-watering showdown with Jonny Clayton – a whitewash winner against John O’Shea.

Former World Champions Rob Cross and Gary Anderson will square off in another enthralling battle after both men defeated Kevin Doets and Gabriel Clemens.

Fourth seed Dirk van Duijvenbode came back from 4-2 down to defeat Mickey Mansell in a last-leg decider, and his reward is a second round match against 2018 winner Daryl Gurney, who defeated Keegan Brown 6-3.

Masters champion Joe Cullen cruised past Rowby-John Rodriguez and into the second round, where he will face Kim Huybrechts, who averaged 101 in his 6-4 victory over Grand Slam semi-finalist Raymond van Barneveld.

Former finalist Dave Chisnall won again on the big stage, holding off a spirited rally from Niels Zonneveld to advance to a match against Scott Williams, who knocked out Grand Slam quarter-finalist Alan Soutar earlier in the day.

Keane Barry, a UK Open semi-finalist, continued his love affair with Minehead by defeating two-time finalist Adrian Lewis, and the Irishman will face Andrew Gilding, who defeated Ricky Evans 6-2 with a ton-plus average.

Martin Schindler also averaged three figures in his 6-4 win over Vincent van der Voort, holding off the Dutchman’s late rally to set up a last-32 meeting with Chris Dobey, who defeated Geert Nentjes 6-1 to advance.