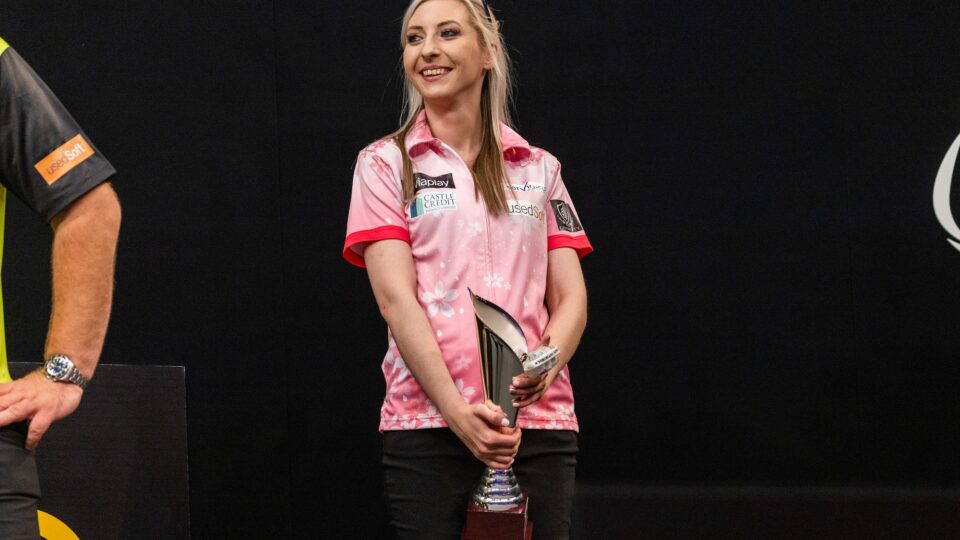 Fallon Sherrock and Micheal van Gerwen both set new records for averages at the Grand Slam of Darts on Day Two.

The Finalists from the Nordic Darts Masters earlier this year both produced fine performances to enter the record books.

Sherrock wowed the Wolverhampton crowd producing a 101.55 against Mike De Decker. A total that takes her above Lisa Ashton’s 100.34 at the UK open vs Aaron Beeney to become the highest televised average by a female player.

As is so often the case, Van Gerwen then went and assured he shared the headlines. The Green Machine has not had the most productive 2021 by his own standards. But a good run of results in the last few weeks suggest he is returning to top form at the right time.
Perhaps spurred on by comments from his newest rival, Gerwyn Price, Van Gerwen produced a record breaking display of his own.

Mighty Mike eclipsed the Grand Slam of Darts record average, by throwing a 115.19. Taking him over the 114 that Dimitri van den Bergh managed during last years tournament,

Elsewhere in the evening session on day two:

Fallon Sherrock obviously headlined the action in group E after beating Mike De Decker 5-0. The aforementioned record average included.
De Decker had looked promising in qualifying for the Grand Slam, beating Adrian Lewis and Kim Huybrechts to book his ticket to Wolverhampton. But the Young Belgian suffered two heavy defeats, and exits at the group stage.

Gabriel Clemens has assured his passage in to the knockouts. The German number one defeated Peter Wright in a last leg decider to sit atop of the group with one game to go.

Wright’s loss puts him in second, with a better leg difference than Sherrock in third. The Queen of the Palace will need to better Snakebites result on Tuesday if she is to join Clemens in the knockout’s at the expense of the Scot.

The battle to qualify from group F sits in the balance, with all 4 players in the group still able to progress and be eliminated.
Matt Campbell’s 5-3 defeat to Luke Humphries has him propping up the table, just below the former World Youth Champion.
Jose De Sousa’s 5-4 victory over Mensur Suljovic means he has the advantage over the others heading in to Tuesday. But wins for Humphries and Suljovic could end the title defence from The Special One at the first stage.

Michael van Gerwen rules the roost in group G with one more round of fixtures to go.

His 5-2 victory over Joe Cullen means he is two from two, but he hasn’t guaranteed qualification yet. Just Like Group F all 4 players can still escape from this group.

Lisa Ashton has the most work to do. The Lancashire Rose suffered a 5-2 defeat to John Henderson, but a big win over Joe Cullen on Tuesday may be enough to reach the knockouts.

Arguably the group of death, Michael Smith is through un-scathed after his second victory in the group. This time beating his old mentor Gary Anderson 5-2.

Joe Davis’ injury means he has been unable to produce a competitive level winning just 1 leg in 2 games. This time going down to Barney 5-0. The fact he takes on Michael Smith on Tuesday leaves a straight shootout between Anderson and Van Barneveld.

Coverage of the Grand Slam of Darts continues this week on our Twitter, Facebook, and YouTube Channel.
Don’t forget to check out our friends at BoyleSports also as they have plenty of offers on this week including a price boost on the Full House market. (Please bet responsibly. BeGambleaware.org)