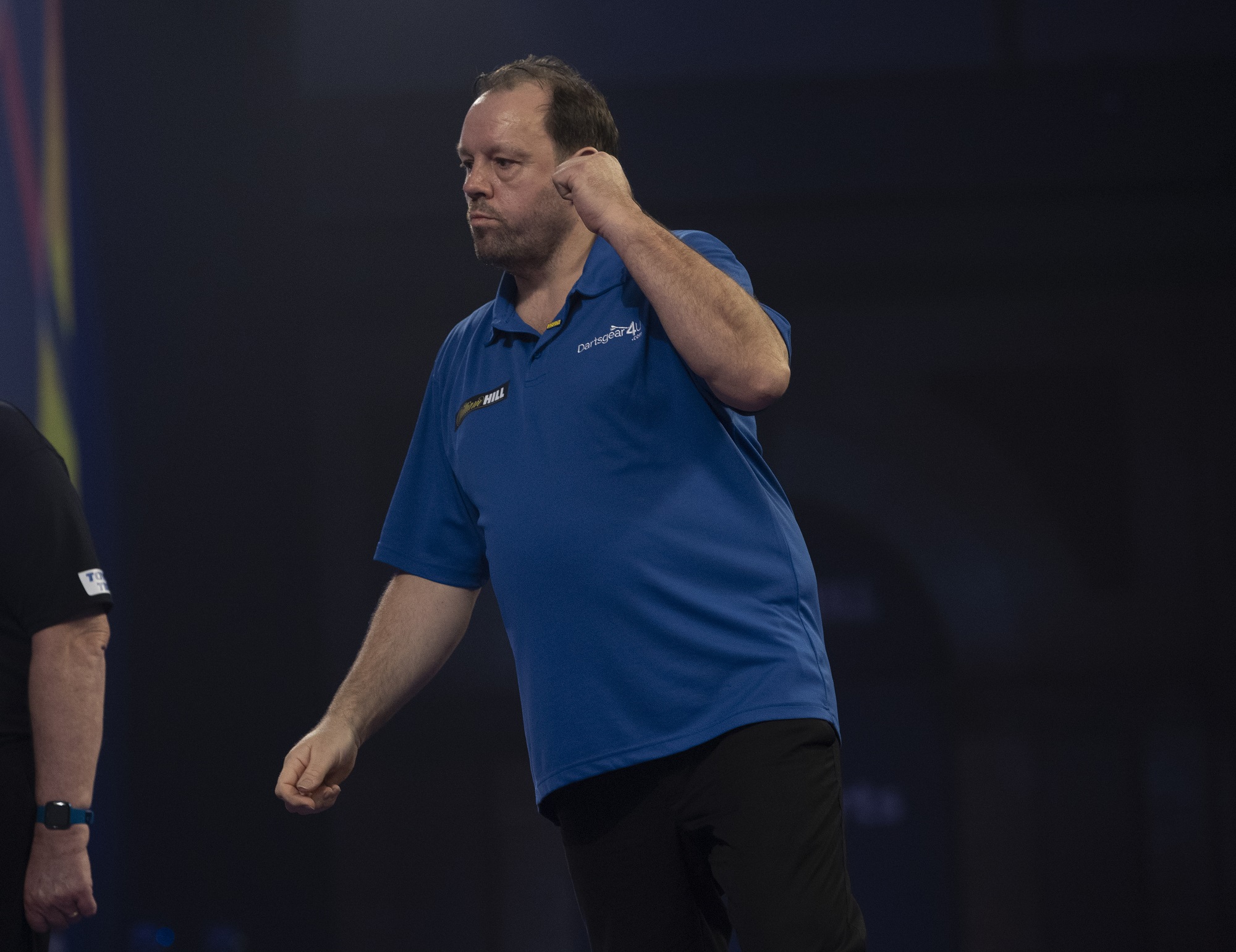 Day nine of the World Darts Championship saw Michael Smith crash out in round two for a second consecutive year.

The number four seed was outplayed by Cradley Heath’s Jason Lowe, who beat Bully Boy 3-1 in the biggest upset of the tournament thus far.

Nathan Aspinall almost joined Smith in being knocked out, but he came from two sets down and survived match darts against Scott Waites to win a gripping contest.

Michael Smith had high hopes of coming into this event and winning his first ever TV title. Now, for the second straight year, those hopes were dashed at the first hurdle.

Jason Lowe, who came close to defeating Michael van Gerwen at the UK Open, looked in control from the start. An 88 on the bull saw him break the Smith throw in 12 darts in the opening leg, before winning the first set 3-0 35 darts later. Lowe continued his excellent scoring in the second set and denied the Bully Boy a shot at double throughout it. He wrapped it up in 43 darts, going 2-0 up in quick time.

Smith, who made the final of this event two years ago, got his first leg on the board at the start of the third set. He went 2-0 up, but missed six chances to wrap the set up, allowing Lowe to level it at 2-2. The Bully Boy though stayed alive, hitting a 74 outshot on double eight, with his opponent on 28 for the match.

For Smith though, the third set was a stay of execution. Lowe continued to impress, and once again did not offer his opponent a chance at double all set. He won the fourth set 3-0 in just 42 darts, to send the Bully Boy home in round two for the second straight World Championship. The Cradley Heath player’s reward is a third round tie against Devon Petersen.

Nathan Aspinall almost joined Smith in being sent home from the tournament, but survived match darts from Scott Waites to stay alive and make round three.

For the first two sets, the two time BDO World Champion Waites looked unplayable. Two 13 darters and one 14 saw him take the first set 3-1, and despite Aspinall hitting a 160 outshot to level the second set at 2-2, he found a 13 darter on throw to win the set 3-2 and go 2-0 ahead.

Aspinall though would not be beaten without a fight. The two time semi finalist produced a 12 darter in the fourth leg of third set to take it 3-1, and broke at the start of the fourth with a lovely 104 outshot with Waites on 48. It would be another 3-1 set for The Asp, as he levelled the match at 2-2.

That sent the contest into a fifth and deciding set, which was filled with drama. In the first leg, Waites was once again on 48, before Aspinall found an astonishing 150 checkout to hold. Scotty 2 Hotty would not let that bother him though, levelling up on double four, before breaking Aspinall’s throw with a stunning 125 checkout which saw him go bull, 25, bull.

Waites was then throwing for the match, and he left 75 after nine. However, much like in the game at the Players Championship Finals between the pair, the two time BDO World Champion could not get over the line. He missed four match darts, as Aspinall hit double eight to clean up 25 to level the game once more. In the deciding leg, the missed darts clearly had an affect on Waites. His scoring deserted him, as The Asp cruised to a 17 dart hold to win the set and the match 3-2 to bring an instant classic to a close. Aspinall now faces Vincent van der Voort in round three.

Stephen Bunting saw off Andy Boulton in the game of the afternoon session. The game went to a last leg decider, but The Bullet came through 3-2.

Boulton was the one who started brighter. With the opening set level at 1-1, a magical 129 finish on the bull gave The X Factor a crucial break, which he followed up with an 11 darter to hold and take a 1-0 lead in the match.

A 149 checkout gave Boulton the early lead in the second set, before Bunting found a 148 outshot to level the set with his opponent on 36. That seemed to settle the former BDO World Champion, as he found a fantastic 13 darter in the deciding leg of the set to break throw and level the match.

Bunting carried on his purple patch in the third set, winning it in 46 darts with a 105 checkout to take a 2-1 lead. Boulton would not relent though, finding a whitewash fourth set of his own in 50 darts to level up once more, despite Bunting missing chances to win every leg of the fourth.

That set up a fifth and deciding set, in which both players held twice on their own throw to take the match to a one leg shootout. Bunting and Boulton took their scores to 84 and 81 respectively after nine, with Bunting having first go at the checkout. The Bullet took out the 84 in two darts to bring a fantastic contest to an end, winning the set and match 3-2. He faces James Wade in round three.

Gary Anderson set up a mouthwatering tie with Mensur Suljovic in round three. The Flying Scotsman defeated Lativa’s Madars Razma 3-1.

The first leg of the match saw both players miss a combined ten darts at a double. However, Anderson eventually found double two to break the Razma throw first up. Two back to back 14 darters saw The Flying Scotsman claim the first set 3-0.

Three missed darts at a double from Anderson saw Razma swoop in for the opening leg, before the Latvian held twice to level the match at 1-1. Razma would go 1-0 up in the third set, before Anderson levelled with a shot at double two. Anderson then turned the set and ultimately the match in his favour, with an excellent 101 checkout for a 12 dart break. He followed that with a 14 darter to hold and take a 2-1 set lead.

The fourth set saw the two time World Champion produce some lovely outshots to win the contest. A 94 checkout and a magical 161 finish saw him hold twice, before he found double top in the fifth and deciding leg, to win the set 3-2 and the match 3-1.

What else happened on day nine of the World Darts Championship?

Dave Chisnall battled through against Keegan Brown to make the last 32. The first two sets went all the way, as both players held throw for 10 legs to make the game level at 1-1.

The first break of throw came in the 13th leg. Brown missed five darts to hold throw, and Chizzy, who’d missed two himself, found double five to get the break. He then wrapped up the third set with an excellent 144 checkout. Chisnall missed plenty of darts at a double in the fourth set, allowing The Needle to go 2-1 ahead and throw for the chance to level. However, an 18 dart break and a 16 dart hold on double 12 saw Chizzy take the match 3-1. He’ll face Danny Noppert in round three.

Mensur Suljovic make not like the Alexandra Palace much, but he beat Matthew Edgar to set up the showdown with Anderson. The Gentle won the first set in 50 darts, as Edgar did not get a dart at a double. Prime Time would level in the second set, winning it with a 64 checkout in the deciding leg, with Suljovic left on 76.

The Austrian did not let that bother him though, as he reeled off another whitewash set on his throw in just 41 darts. He then broke Edgar’s throw at the start of the fourth set, hitting a spectacular 140 outshot. Suljovic then held twice to win the set and the match 3-1 to move into the last 32.

Jermaine Wattimena fought hard to win a tight game against Nick Kenny. The Machine Gun saw off the Welshman 3-1 and will take on Dimitri Van den Bergh in the last 32.

Kenny missed three darts to break the Wattimena throw in the third leg of the opening set, as the Dutchman held to go 2-1 up, before producing a lovely 92 finish to take the set 3-1. Roles reversed in the second set, as Machine Gun missed chances to break in the third leg of the second set. Kenny held in 22 darts, before finding a 14 darter to level the match at one set all.

Wattimena found an excellent 156 to go 2-0 up in the third set, before missing five to wrap it up in three legs. Instead he had to settle for a 3-1 set, hitting double three to go 2-1 ahead. Both held to start the fourth, before Machine Gun hit back to back 15 darters to close out the win.

Ricky Evans made the third round for the second straight year, beating Mickey Mansell 3-1. Rapid Ricky averaged just 77 in the first set, as Mansell went 1-0 up. However, Evans responded brilliantly, wrapping up the second set on tops to win it 3-1 and level.

The Kettering man then won the third set in just six minutes, before ending the contest with an excellent 102 checkout to win the fourth set and the match 3-1. Evans, who reeled off nine of 11 legs, plays Michael van Gerwen in round three.