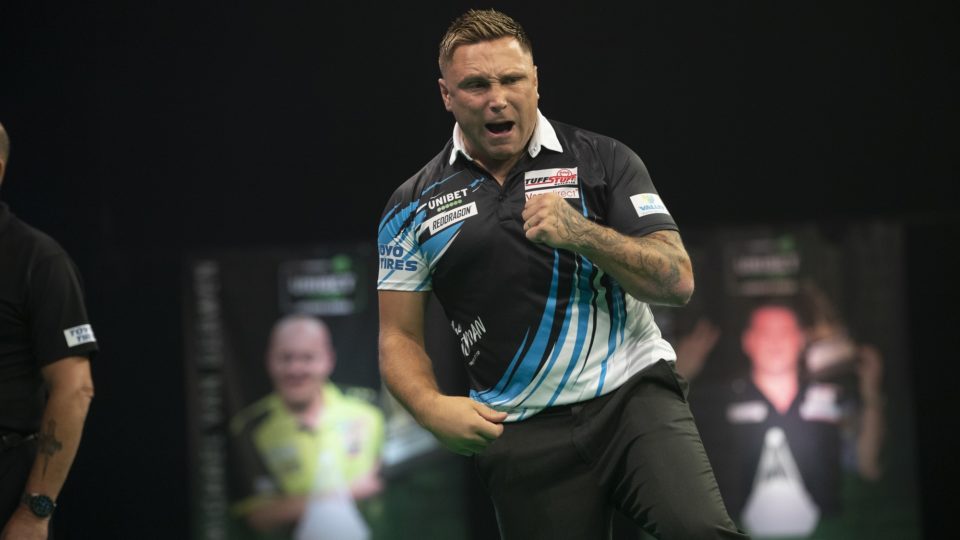 Gerwyn Price, Gary Anderson and Michael van Gerwen moved into the top four on night 12 of the Premier League.

On another night of high quality action:

Gerwyn Price moved into the top four with an 8-6 win over Peter Wright.

In a high quality affair, the opening four legs were shared, before Price found a 74 outshot to claim the first break at 3-2. He then consolidated the break with a 72 outshot to lead 4-2.

Then, for the third time this week, Wright hit eight perfect darts and had a chance for a second nine darter in two nights. Unfortunately, like on Thursday, he went inside on double 12 and missed the chance to claim £50,000 from the tournament sponsors for hitting two in the same tournament. He had to settle for a 14 dart leg to trail 4-3.

Both players traded 127 outshots, but Price managed to hang on to the break he won in the fifth leg. He finished the match with a brilliant 128 checkout, to get over the line in one of the games of the week, where both players averaged over 106.

Gary Anderson won 8-6 in a fantastic opening game against Nathan Aspinall on night 12 of the Premier League.

Anderson, who blew a 7-3 lead last night against Glen Durrant to only get a draw, came out firing. He started by winning the opening three legs, averaging 115 in the process.

Aspinall would not go quietly though. After sharing the next two legs to trail 4-1, The Asp found his range on the outer ring, reeling off three straight legs to level the game up at 4-4.

Anderson regained the lead with a 76 checkout to lead 5-4, which turned out to be the crucial break in the match. Despite Aspinall staying in the game by holding his throw, he could not carve out a chance at double to get the draw. This allowed Anderson to hit double top in the final leg to seal a crucial win and go second in the Premier League table.

MvG moves back into the top four

Michael van Gerwen ended a topsy turvy week with an 8-5 win over Michael Smith on night 12 of the Premier League.

After suffering three defeats in four games, van Gerwen was determined to come out and put things right. It didn’t start well though, as Smith found a 117 checkout to get an early break.

MvG would not roll over though, and won three straight legs to take a 3-1 lead. Smith broke straight back, but then van Gerwen found a brilliant 110 checkout to regain a two leg lead at 4-2.

The world number one reeled off another two legs to take a 6-2 lead, and despite a mini comeback from Smith to get it back to 6-4, including a 145 checkout, van Gerwen held his nerve. He held his throw twice, finishing off with a 72 outshot to win 8-5 and go third in the Premier League table.

Glen Durrant stayed four points clear at the top on night 12 of the Premier League. He beat Daryl Gurney 8-3.

It was a very solid performance from Durrant, who punished missed doubles from Gurney to go 1-0 up. Durrant then broke for a 2-0 lead, and held again to consolidate the break. It seemed Gurney would get his first leg on the board in leg 4, hitting back to back 180s to leave 41 after nine darts. However, he missed three to win it, allowing Duzza to hit double 10 to get the double break 4-0.

This seemed to push Durrant on, as he reeled off three more legs to guarantee a point and go 7-0 up. Despite a mini revival from Gurney, including breaking in the ninth leg when Durrant missed three for the match, it only delayed the inevitable. Durrant would find double 10 with his sixth match dart to complete the 8-3 and all but secure his place at Finals Night on Thursday 22 October at The O2 in London.