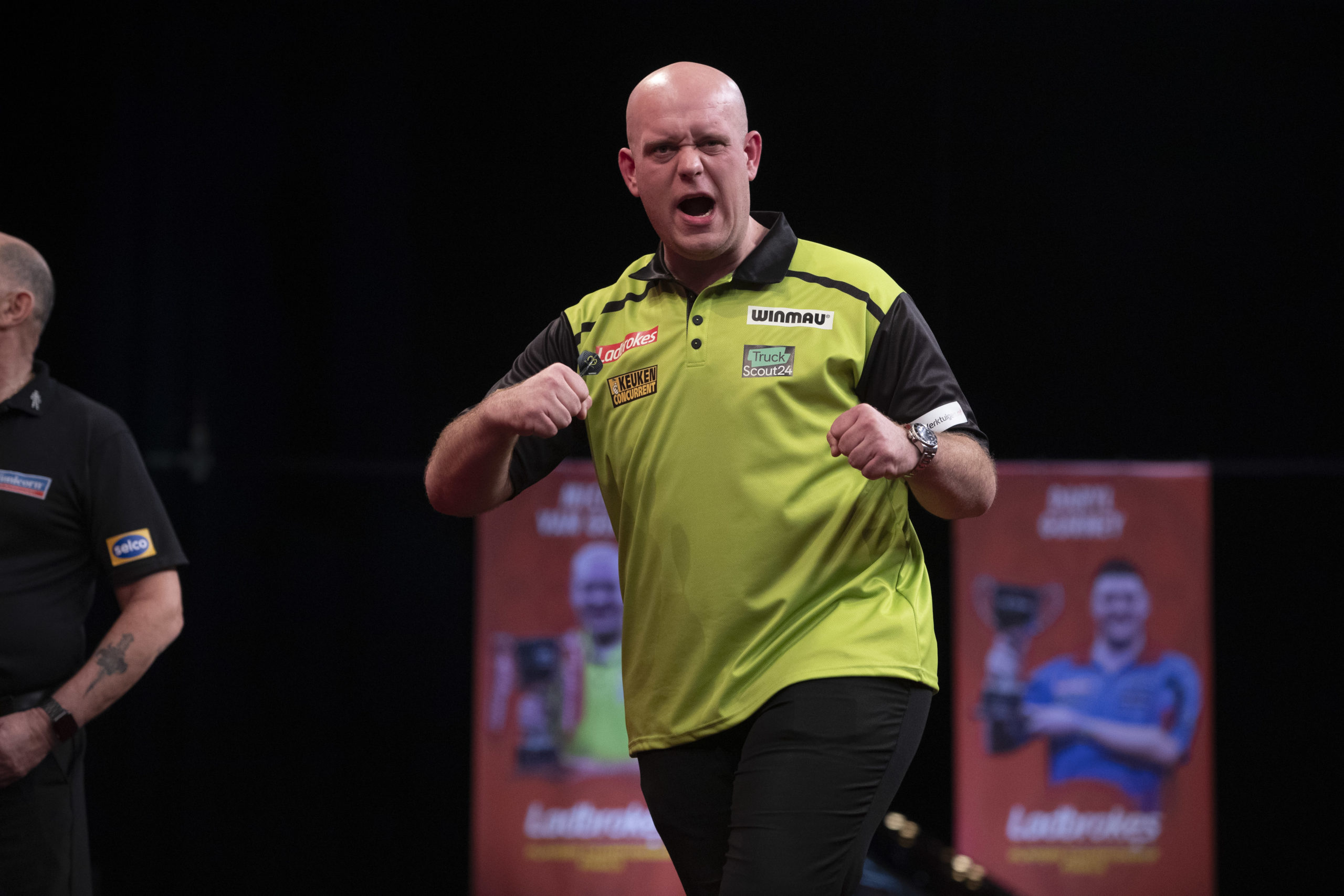 Michael van Gerwen, Peter Wright and Gerwyn Price all made the last eight on day two of the 2020 Players Championship Finals.

Much like yesterday, Van Gerwen and Price comfortably won their contests. The world number one came through 10-7 against fellow Dutchman Jeffrey De Zwaan, while the Iceman won 10-6 v Luke Humphries.

The World Champion though was taken to a last leg decider by Callan Rydz, eventually winning 10-9.

Van Gerwen is still in the hunt to defend the title he won in Minehead 12 months ago. After winning 6-4 v Jonny Clayton in round two, his 10-5 victory over Jeffrey De Zwaan saw him into the last eight.

The world number one started brightly. After two holds of throw, he found three straight legs to take a 4-1 lead at the end of the first session. However, De Zwaan, who beat Wayne Jones in the previous round, got the game back to 4-3.

The Black Cobra then missed two at tops to level the contest, allowing MvG to steam roll the rest of the session, as he won three straight legs to take a 7-3 lead.

De Zwaan would win four of the next six legs, but the Green Machine eventually found double two to seal the victory.

The Titan, who beat fellow Dutchman Neils Zonneveld in round two, was at his brilliant best, averaging over 110 at one stage. He took advantage of poor finishing from Woodhouse, who came from 4-0 down to beat Andy Boulton 6-4 in the second round.

Dirk won the first eight legs, including 106 and 124 checkouts before Woodhouse got on the board with a double eight. However, van Duijvenbode would not let that phase him, winning the next two legs to cruise through 10-1. Woodhouse ended the match just 1/15 on the outer ring.

Wright wins against Rydz to face Smith in last eight

Peter Wright once again struggled in his evening clash, after being taken to a last leg decider for a second straight night.

He came out firing in the afternoon, winning 6-1 against Simon Whitlock to set up a showdown with youngster Callan Rydz, who’d beaten Pro Tour winner Ryan Searle 6-4 in round two.

It was a tight clash throughout the contest, as Rydz pinged back leads of 4-1 and 6-4 for Snakebite to level each time. The World Champion thought he’d got the job done in the 16th leg, hitting tops for a 12 dart break to go 9-7. However, a fantastic 167 on the bullseye, followed by a 13 darter, meant Riot stayed in the contest once more.

Like Ryan Meikle yesterday though, Rydz could not find the big trebles in the final leg, allowing Wright to hit double four for a 19 darter to crawl over the line.

Snakebite faces Bully Boy Michael Smith in the last eight, who beat Jose De Sousa 10-7 in revenge for his quarter final loss to the Special One at the Grand Slam last week.

De Sousa, who beat Vincent Van der Voort in round two, was in control at 6-3, before Smith found a tops to hold at 6-4 at the second interval.

That seemed to give Bully Boy, who’d come from behind to beat Gary Anderson earlier in the day, the boost he needed. He reeled off six of the next seven legs, including an excellent 82 finish to end the match, to come through 10-7 and make the last eight in Coventry.

Price powers past Humphries to set up Cullen clash

Gerwyn Price is still on track for a potential semi final meeting with MvG. He followed up his second round win over Jamie Hughes with a 10-6 victory over World Youth Champion Luke Humphries. Humphries had beaten Jermaine Wattimena 6-4 in a game of the tournament contender earlier on day two of the Players Championship Finals.

After six holds of throw, the World Grand Prix winner found a break followed by an 11 darter to go 5-3 ahead. However, Humphries would not relent, winning two straight breaks himself to level at 5-5.

After both holding, the game changed in the 13th leg. Cool Hand hit a lovely 104 to set up 57, but Price would not let him get a shot. He found a fantastic 130 shot on the bull to take out the baby fish and did not look back. He won the remaining three legs in 46 darts to move into the quarter finals.

Price’s opponent in the last eight will be Joe Cullen, who won a last leg decider with Rob Cross in round two, before emerging victorious 10-8 against Ian White.

In a topsy turvy contest, the Rockstar won five of the first six legs to go ahead 5-1. White, who’d come through against Gabriel Clemens in round two, then reeled off four straight legs of his own to level at the intermission.

Diamond then won three of the first four legs after the restart to take an 8-6 lead, but Cullen kept his cool. A 13 and 11 darter saw him level, before White missed a dart a double 16 to retake the lead. The Rockstar punished him, hitting double eight to break, before finding double seven to get across the line and make the quarter finals of the event for the first time.

King and Heta to square off

Mervyn King made the quarter finals of the Players Championship Finals for the second straight year. He beat Karel Sedlacek 10-5 in round three, having dispatched Danny Noppert 6-1 in the second round.

The King looked bothered by something in the opening exchanges of the match, but it did not stop him racing into a 6-1 with some excellent scoring. Sedlacek, who survived a last leg decider against Madars Razma in round two, eventually stopped the rot with a 78 outshot.

However, King would not let him back in the contest. After taking a 7-3 lead at the interval, he found the remaining three legs required to get the victory, ending the contest with a double 16.

King’s opponent in the last eight will be debutant Damon Heta. After surviving match darts against Ryan Murray in round two, he produced a more comfortable display in beating Ross Smith 10-7.

Heta was leading 5-4 when he found what turned out to be the crucial break of the match. Smith, who’d beaten Nathan Aspinall earlier in the day, missed double eight for a 127. The Heat punished him, hitting an 84 checkout on the bull to take a 6-4 lead at the interval.

The Australian then reeled off three of the next four legs, before a mini revival from Smudge got him back in the contest. Heta though kept his calm, and found double 16 for a 12 dart leg to make his second quarter final in as many TV tournaments.