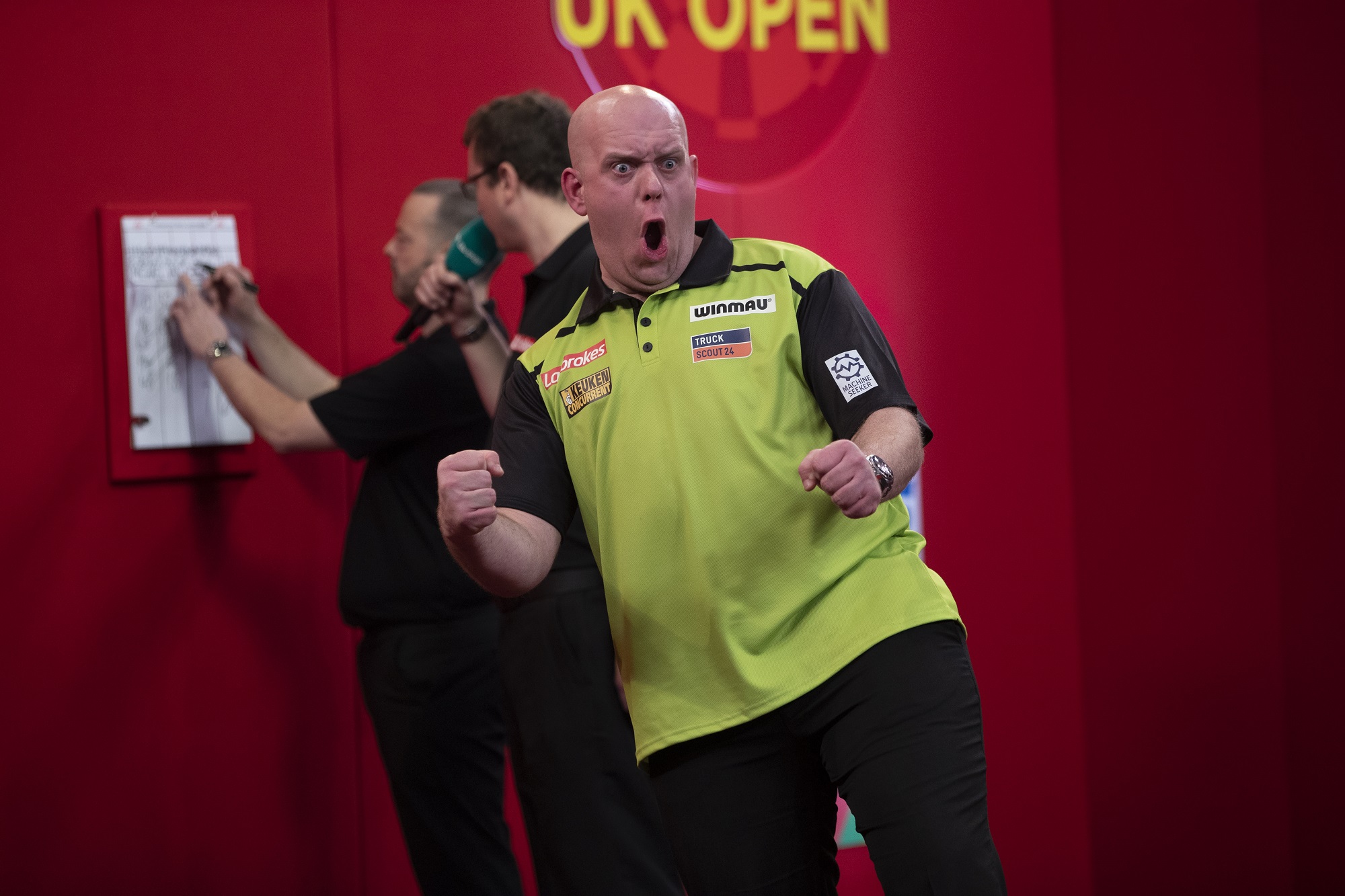 Michael van Gerwen, Gerwyn Price and Peter Wright won their round one games on day one of the Ladbrokes Players Championship Finals.

Van Gerwen and Price both won 6-2 against Darius Labanauskas and John Henderson respectively. Wright had to overcome Ryan Meikle in a last leg decider.

However, day one of the Players Championship Finals also saw some huge shocks in Coventry, as big names including:

All lost in round one.

It was a comfortable night at the oche for both MvG and The Iceman on day one of the Players Championship Finals.

Van Gerwen, looking to defend the title he won last year in Minehead, produced an emphatic display against Lithuanian’s Labanauskas. The Green Machine fired in a 103.3 average, and hit three ton plus checkouts including a magical 156, as he barely broke sweat. He will face World Cup winner Jonny Clayton, who defeated Mickey Mansell 6-2 in round two.

It was a similar story for Price, who wants to go one better than losing in the final as he did 12 months ago. Winning the first two legs in 29 darts, the other half of the World Cup winning duo did not look back. Taking a 3-2 lead at the interval, Price reeled off three legs in 42 darts to send the Highlander home, and set up a clash with Jamie Hughes tomorrow, who beat Ricky Evans 6-2.

However, things were not plain sailing for the World Champion, and number one seed Wright against Meikle. Snakebite, who suffered an early exit from the Grand Slam last week, went 3-1 up thanks to a stunning 156. However, the Barber would not lie down, winning three of the next four legs to level 4-4.

Another break from Wright on double 16 moved him 5-4, before the 2020 Development Tour Order of Merit winner produced a stunning 167 checkout to level the match contest. However, Meikle’s scoring let him down at just the wrong moment, allowing Wright to hit double 16 again for an 11 darter to eventually get over the line. The World Champion faces Simon Whitlock in round two, after the Wizard defeated Adrian Lewis 6-4.

Big names fall on day one in Coventry

The biggest name to fall on day one of the Players Championship Finals, was the Grand Slam runner up James Wade.

The Machine fell 3-0 behind to young Dutchman Neils Zonneveld, and could not recover, as the 22 year old completed a famous victory with a stunning 122 on the bullseye. Zonneveld faces fellow Dutchman Dirk van Duijvenbode in round two, after he beat William O’Connor 6-4 in a fantastic game.

Elsewhere, stage two saw a number of big names fall, particularly in the afternoon. The number five seed Krzysztof Ratajski missed a lot of doubles, and it cost him, as Karel Sedlacek dumped the Polish Eagle out with a 6-4 win. The Czech will play Madars Razma in round two, who beat Chris Dobey 6-3.

The 2018 winner of this event, Daryl Gurney, was also sent home in round one. Superchin was just 2/9 on the outer ring, as he was beaten 6-2 by Callan Rydz.

Finally, the Premier League Champion Glen Durrant played better as he continues to recover from contracting COVID-19. However, Wayne Jones produced a stunning performance to knock Duzza out in round one, hitting a 100 checkout to complete a 6-3 victory. Jones will face Jeffrey De Zwaan in round two, who beat Darren Webster by the same scoreline.

Elsewhere, day one of the Players Championship saw:

You can find more reaction from day one in Coventry on our YouTube channel.