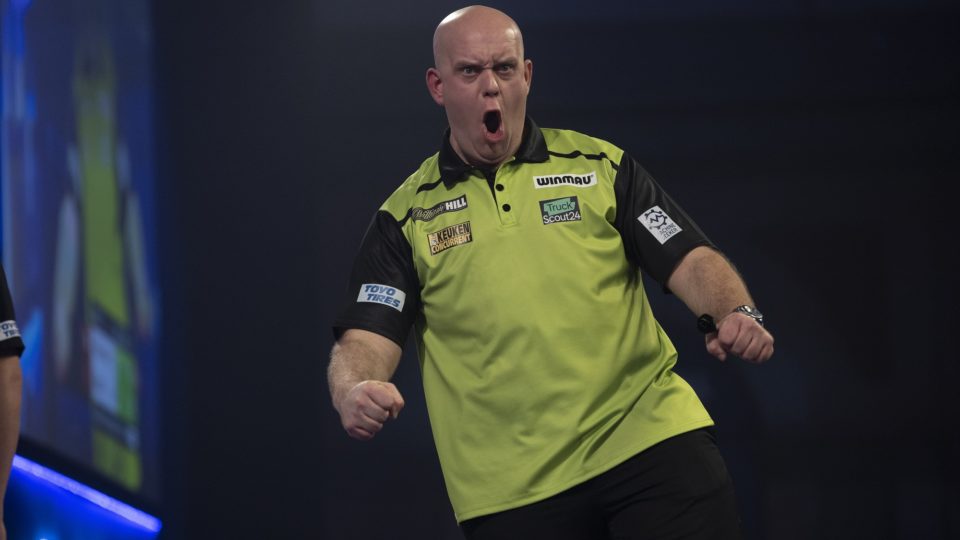 Michael Van Gerwen looked back to his best on Day 5 of the World Darts Championship.

The Green Machine declared that “I’m back” as he beat a game opponent Ryan Murray 3-1 with a 109 average. The other seed in action today, Mervyn King, also saw off his opponentMax Hopp 3-1.

Mighty Mike, who is targeting a fourth World Championship title, is also defending his coveted position on top of the PDC Order of Merit. Van Gerwen has held the number one spot for 7 years but will need a good run to the later tournament rounds to ensure that Peter Wright or Gerwyn Price don’t prise the position away from him.

The Dutchman got to work quickly taking the first set 3-0 averaging over 100, but a composed Ryan Murray fought back to win the second set and levelled the tie. Murray continued a run of holding his throw until finally broken by the Green Machine to take the third set and with it, a 2-1 lead. Murray’s valiant effort however just couldn’t hold back the ever increasing average of Van Gerwen who coupled with clinical finishing, posted a 108.98 average, smashing the highest average of the tournament so far set just a few hours previous. Murray missed a dart at double 20 to take the game to a deciding set and did provide a solid challenge for Van Gerwen.

The Green Machine, who has put the rest of this year’s competitors on notice, exclaiming after the game “I’m back” looks confident about maintaining his form and will likely have a few others worried after that performance.

In-form Mervyn King began his 14th Ally Pally campaign with a 3-1 victory over Max Hopp. After The King made a fast start taking the first set 3-0 with a superb average of 109.98, Hopp looked more competitive in the second set missing double 8 to level the game, letting King off the hook and allowing him the opportunity to take out 47 for a 2-0 lead. Things got interesting as the German fought back winning the third set, but his revival was short lived when he was broken in the fourth set leaving the King to hold for the match setting up an intriguing round 2 meeting with Grand Slam Champion Jose De Sousa.

Thrilling Debut for Waites as The Gambler hangs on

In a contender for the match of the tournament so far, Scott Waites needed all 25 possible legs to see off CDC qualifier Matt Campbell. It was clear from the first leg which included 10 maximums between them and a 160 checkout from the Canadian that something quite sensational lay ahead. Campbell, who was making his second appearance at the Palace showed moments of brilliance, pushing PDC World Championship debutant Waites all the way.

In a match with 12 180s, 46% checkouts and 5 100+ checkouts, Waites needed to be clinical and hold his nerve. The two took turns tearing sets away from their opponent in a thrilling contest leaving the game tied at two sets all and requiring a decider. Not yet finished keeping fans on the edge of their seats, the two stood level in the deciding set at 2-2 requiring Waites to hold for the match. Waites needed only 11 darts to see out the final leg and book a place against Nathan Aspinall in round two.

Baggish took advantage of Heta’s slow start and whilst the Australian took some time to get going, Baggish looked comfortable from the off, taking his chances to establish a two set lead. Heta stormed back at a blistering pace averaging 107.36 and checkouts of 146 and 160 in the fourth set to tie the match 2-2.

The deciding fifth set was chaotic with both players showing moments of brilliance and calamity. Both appeared uncomfortable throughout the deciding set with Heta trying to motivate himself and Baggish pacing up and down the walk on platform. Australian Heta will be disappointed that he didn’t close the matter out having missed 6 match darts but Baggish stuck around to take the deciding leg and the match. Baggish moves on to face two time champion Adrian Lewis in round two.

What else happened on day five of the World Darts Championship?

Kim Huybrechts chalked up what was at the time the highest average of this year’s World Darts Championships so far posting a 104 average as the world number 39 brushed aside Chinese qualifier Di Zhuang without giving up a single leg. In a game that was anything but competitive, the Hurricane put in a professional performance swiftly closing out sets 3-0, 3-0, 3-0. Huybrechts will look to maintain his level as he moves on to a surely more competitive contest against Ian “Diamond” White in round two.

Likewise Andy Boulton put in another of the day’s professional performances to come past Deta Hedman without looking close to being upset. The match’s highest checkout of 81 was the only one above 65, resulting in a lack of anything that could be considered a highlight reel moment. Averaging 90.65 Boulton, who now plays Steven Bunting in round 2, went about his business in a workmanlike way closing the match out 3-1. The fact that all four sets were won 3-0 does some way to explain the lack of drama. Hedman will be disappointed in her debut at the Palace, she is capable of more than she showed against Bolton and playing at her usual level could have put him under pressure.

After an early back and forth Nico Kurz put in a mature performance to hold off 2012 runner up Andy Hamilton. The young German started strong taking the first set but seemed to lose his way at points. Composing himself, Kurz was able to elevate his game enough to come through 3-1, in what was a scrappy affair with both players not at their best. Kurz will need to raise his game when he meets compatriot Gabriel Clemens in an all German affair in round two.

Steve Lennon beat Daniel Larsson 3-1 in the opening game of the day. After breaking the Swede to take the first set, Lennon took just 42 darts to take the second set after going a leg down. Larsson fought back taking the third set, taking out 129 and then being gifted the final leg when Lennon missed three darts at double 8. The Irishman quickly put the third set behind him taking the last set in style three legs to nil. Lennon moves on to face Devon Petersen in round two.