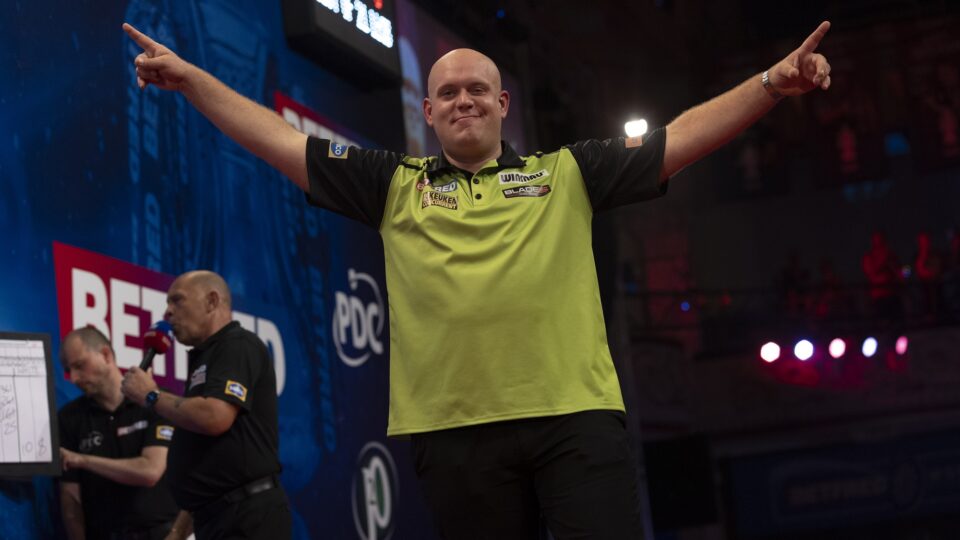 The Green Machine did not put in a vintage performance however, he was never in trouble winning comfortably 16-9 against Nathan Aspinall.

He will play Peter Wright in a mouth-watering last four game on Saturday night, after Snakebite beat Michael Smith to reach the semi final.

In a game full of drama but not the drama we expected. The doubling from both players made this a battle with a combined total of 54 missed darts at a double. They shared these equally with 27 missed darts each.

The game started with both players hitting a 180 with their first visit to the board. In the early stages we saw Nathan Aspinall have darts to win each of the first four legs however, he was only able to take one of them. The drama then started in leg five with Michael missing three darts in leg five with Nathan not missing this opportunity to go in the break 3-2 behind.

Leg six started with our first ton plus checkout of the night with Michael taking out a 110. This was followed by our second in leg nine, Nathan Aspinall taking out the baby fish on the bull and following it up with a huge roar.

Leg ten, may not have seen a big checkout but the 68 from Michael was followed up by an even bigger roar from The Green Machine which meant he lead 6-4 at the break

The doubling drama continued from this point however, it was Michael who took his chances winning seven of the next ten legs and taking full control of this quarter final.

After the last break, Michael put his foot firmly on the gas firing a couple of 180’s and a 174. The Green Machine made sure he won it in style taking out 261 in five darts. It was a 180 followed by a 81 to book his place in tomorrow night’s semi final.

Wright sees off Smith for a last four place

Peter Wright was the other victor on night seven of the Betfred World Matchplay. He beat Michael Smith 16-7.

Both players started the game brightly. With the first two legs going to Wright, Bully boy then returned with two of his own.

Smith missed double 18 for a 12 dart break going into the break and Wright cleaned up 70 in 15 darts. After five legs of darts we already had 7 180’s.

The second session continued at the same level and we saw both players still average over 100 after 10 leg , with Wright 6-4 up.

After the second break the game only looked like going one way, with Wright reeling off the next seven legs. Smith was able to add a few more legs to make the score more respectable however, Wright saw the game off in style.

Peter Wright finished the game with another average over 100 and put’s himself in a great position to get to another World Matchplay final.

Top four through on day two of Euro Tour

@KeelanKay180 wins a nervy opening match this Tuesday morning. Kay moves onto 8 points with a 4️⃣-2️⃣ victory over Alan Norris in Group A #ODLiveLeague

Fantastic Live Lounge tonight thank you, everyone who joined us 💛💛

Join us in the OD Live Lounge right now!
This week:

What the full match now 📺👇🏻

Phill, Jack and Lee will spend the next hour or so talking over all the big news from the last week in the darts world.

All set for the weekend