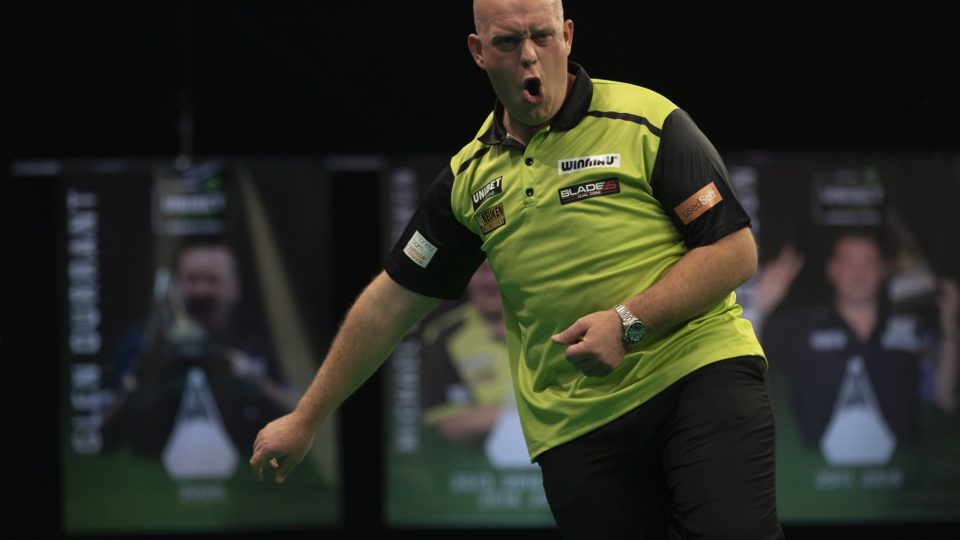 The five time winner of the event demolished Dimitri Van den Bergh 8-3 to overtake his opponent in the top four race.

After questions were raised about whether he’d finish in the top four, Van Gerwen silenced the doubters with an incredible display.

He got off to a perfect start, finding a 126 finish on the bull to break, before holding to go 2-0 in front. Van den Bergh found a 177 to leave 44 in the third leg, before Van Gerwen hit an incredible 123 on the bull to go a double break ahead. He then held on tops to take a 4-0 lead.

25 darts later, The Green Machine went 6-0 up, averaging the best part of 117. However, his scoring took a dip, and Van den Bergh found a way stop the whitewash. The World Matchplay champion won three straight in 39 darts, pushing his average north of 111.

The damage had been done though in the previous legs. The Dream Maker’s scoring went missing, and the five time champion of this event pounced. An 11 darter, followed by a 13 darter, saw MvG get over the line, averaging 109.96 in the process.

Nathan Aspinall won six of the final seven legs to put daylight between himself and the rest of the Premier League Darts field. He defeated Peter Wright 8-5 in the last game of the night.

Both comfortably held throw twice to start the match, before Snakebite looked to have gained the initiative. After holding in leg five, he punished two missed darts at double from The Asp, finding double four to go 4-2 in front.

Averaging just 85 for those six legs, it looked like Aspinall might suffer his first defeat in eight Premier League games. However, he found the accelerator, hitting a 177 to leave 24, and hitting double 12 in the next leg for a 13 dart immediate break back. 16 darts later, he hit the same double, levelling up the match at 4-4.

A fantastic 161 checkout saw last year’s runner up take the lead for the first time, before hitting double 16 15 darts for his fourth leg on the bounce. Wright then missed four darts to remain one break behind, and The Asp punished, hitting tops for a 7-4 lead.

The Asp then missed tops for the match, and Snakebite eventually hit double five to keep the game alive in the 12th leg. However, an excellent 11 dart break of throw gave Aspinall the victory, and cemented his place at the top of the Premier League Darts table.

Clayton comes through after slow start

Despite missing a load of doubles early on, Jonny Clayton deservedly moved back into the Premier League Darts top four. He beat James Wade 8-5 in the first match of the evening.

The Ferret had darts to win all four of the first legs. Despite a lovely 150 checkout to take the second leg, he lost the remaining three to Wade, squandering opportunities at opening up a big lead.

However, after holding in the fifth leg, the game turned in the sixth. After Wade left double 16 after 15 darts, Clayton found a fantastic 134 outshot to level the contest. Two further holds from each saw the match all square at 5-5.

Clayton though had been consistently scoring more than Wade, and eventually, the pressure told. After another comfortable hold, a 44 outshot on double 16 saw him finally get the break ahead. A 15 dart hold, with Wade miles back, ensured both points to Clayton, and a return to the Play-Off places.

De Sousa got the better start, holding before hitting a 99 checkout to break and go 2-0 in front. Anderson got a chance to break straight back, but missed three darts to do so. The Special One punished, hitting a 60 checkout to go 3-0 up.

Both missed darts to take the fourth leg, before De Sousa hit double nine to get the double break. An 88 finish on the bull saw him take a 5-0 lead, but Anderson eventually got on the board in the sixth leg, eventually finding double five to avoid the whitewash.

De Sousa held in the next leg, before missing the bull for a 161 finish. The Flying Scotsman took out 39 to hold, and a 90 shot to break, but it only delayed the inevitable. A 14 and 15 dart leg gave The Portuguese Man O’Scores a deserved win, and leaves Anderson four points off a top four spot.