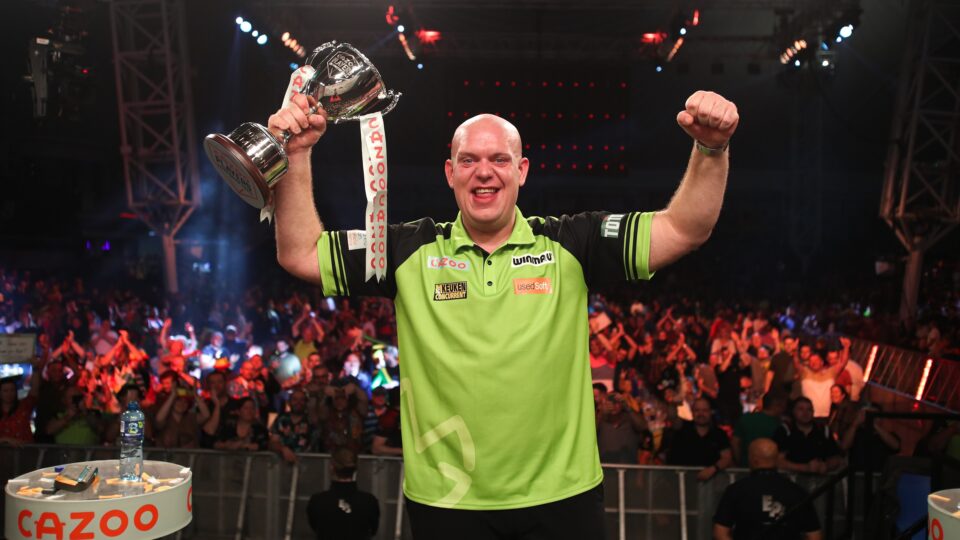 Michael van Gerwen has won the Players Championship Finals for a 7th time.

The Dutchman defeated Rob Cross 11-6 in an epic final that saw Van Gerwen hit a 9 dart leg, and a 170 checkout.

The title is Van Gerwen’s fifth televised title of the year, a significant upturn on his apparent drought in the 18 months previous.

The keys to the final

Van Gerwen’s nine-darter came in the third leg of the final; it started with a 177, went 180, and finished 144 on double 12 to become the second player in the event to accomplish the feat.

In a high-scoring opening to the decider, he also produced legs of 12 and 11 darts to move 6-2 ahead, with both players hitting six perfect darts in other legs.

Cross had started the final with a 13-dart leg and added two 14-darters, but he fell behind 7-3 when Van Gerwen hit a 12-darter with two additional 180s to move just 4 legs away from glory.

After the break, Cross won three straight legs to close the gap to one leg. However, the Hastings ace crucially missed two darts at double 16 to win leg 14 and tie the match.

Van Gerwen ruthlessly pounced with a 170 checkout, checked out 70 to regain breathing room at 9-6, and then slammed in a 142 checkout and double 16 to clinch the championship.

Route to the title

He defeated fellow countryman Danny Noppert in the quarterfinals 10-7, and then defeated Luke Humphries resoundingly 11-5 to advance to the final. In both victories he averaged over 100.

An emotional Van Gerwen dedicated his most recent success to his daughter Zoe saying: “My daughter was watching every game and said ‘Daddy, are you coming home with a big trophy again?’.

“I said if I win the trophy again it’s going to be yours, so that’s why I wanted to win it.

“I’m here to win tournaments – I love winning, I love performing on the stage and to produce something extra, something special in a final like this, gives me a lot of energy.

“It was a special game of darts – I think we both played well and we had to dig really deep, both of us.

“I managed to hit a nine-darter and 170 finish when it mattered but overall I think Rob Cross played a phenomenal game and the game had everything.

“I know I’m capable of a lot more but you also have to be realistic and to win this trophy again, for the seventh time, means a lot to me.”

Check out the interview in full below