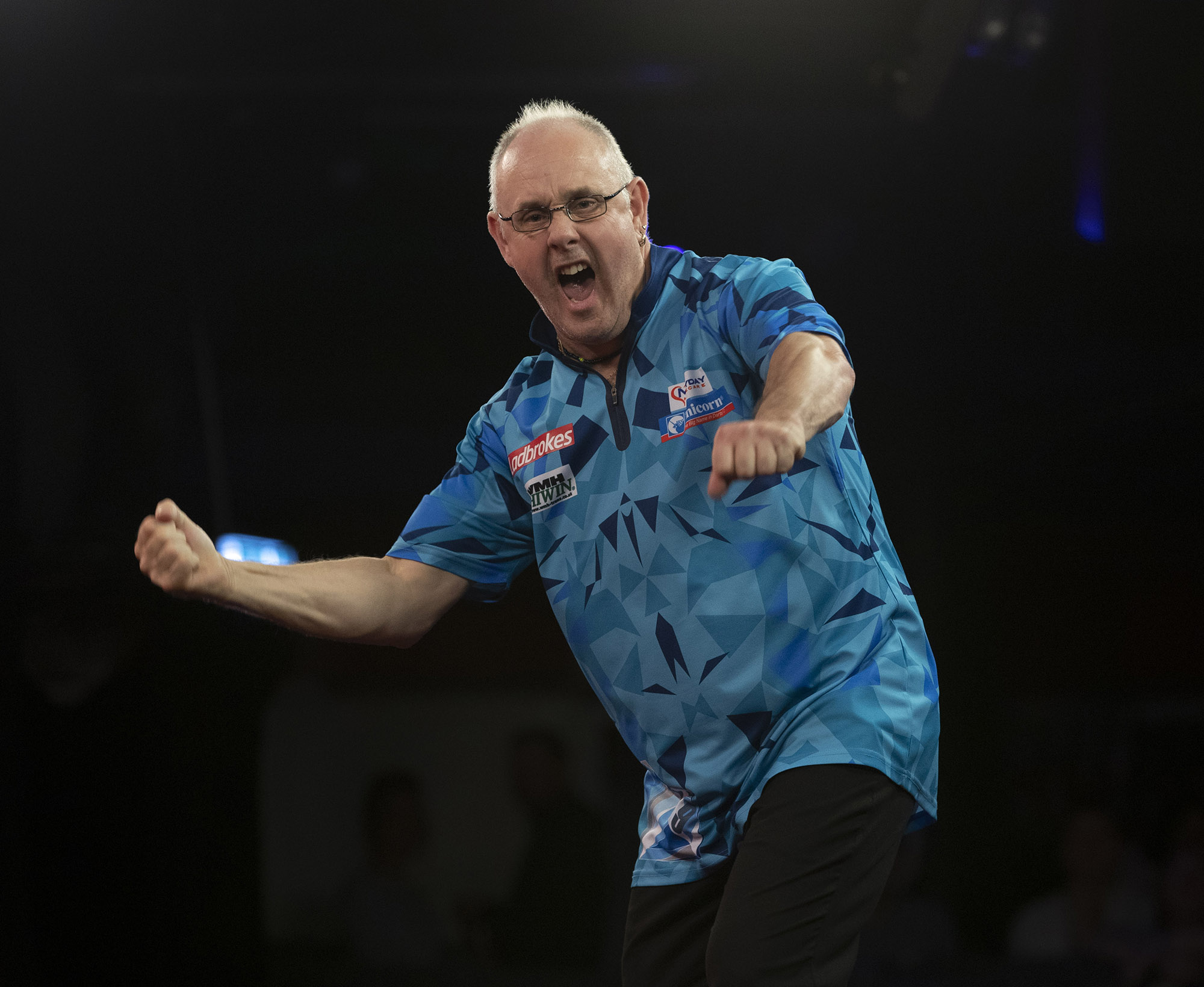 Ian White produced arguably the best TV performance of his career to send Michael van Gerwen packing in round two of the European Championship.

Diamond stunned the world number one, averaging 103.6 to win 10-4 to reach his first ever European Championship quarter finals.

The other big story in round two saw Peter Wright take out the number two seed. Snakebite produced a fantastic second session, winning six out of seven legs en route to a 10-6 victory.

Diamond dazzles to set up date with Devon

White got off to the perfect start in his European Championship round two clash with Michael van Gerwen. After MvG missed three to hold throw, White pinged double 16 to break and take a 1-0 lead. This gave Diamond all the confidence he needed, as he whitewashed the Green Machine in the first session, winning four legs in 56 darts to go 5-0 in front.

The next session was a session of breaks. MvG got on the board, cleaning up 25 to break first after White could not take out 10. White responded straight away, and did the same in the ninth leg when the Green Machine broke back in the eighth leg. Van Gerwen would win the session 3-2, thanks to a 64 outshot, to trail 7-3 at the second interval.

Diamond did not relent. After van Gerwen held to trail 7-4, White then hit double 16 to clean up a crucial 45 with MvG on tops. The world number one then missed a double double outshot in the next leg, leaving White to hit 52 and break once more. Diamond would then wrap up the match on double 16, winning 10-4 and reaching his first ever European Championship quarter final. He ended the match with a 103.6 average, with MvG on 102 despite only hitting 4/13 on doubles.

White will now play the African Warrior Devon Petersen in the last eight. He had to fight back to win his second round game at the European Championship, eventually beating Martijn Kleermaker 10-8.

Kleermaker came out strongest, taking 49 darts to go 3-0 up, which included a 65 outshot to break. Petersen got on the board with a dart at double 16, before the Dutchman punished a missed dart at tops from the African Warrior to hit a 60 outshot and lead 4-1 at the break.

Petersen found his range in the second session. He took 47 darts to reel off three legs of his own, hitting double four to level up the game. The African Warrior would continue his purple patch, winning another two straight legs to whitewash the session 5-0 and take a 6-4 lead into the second interval.

Kleermaker would level the game once again at 6-6, before the damage was done by Petersen in the next two legs. First, he found an 11 dart break to retake the lead, before hitting double eight to consolidate it and go 8-6 ahead. Despite Kleermaker holding throw, the German Darts Championship winner kept his cool, eventually hitting double five to triumph 10-8.

Wright and West win to set up last eight meeting

Wright started well, winning the opening two legs to take a 2-0 lead. Price would win two straight legs himself to level, before the World Champion cleaned up 25 to take a 3-2 lead into the break.

Snakebite effectively won the game with a magnificent second session. Three holds of throw saw Wright have a 5-3 lead, before Price missed double eight for a 127. There, Wright hit double nine to take a 6-3 lead, before punishing two more missed darts from The Iceman to clean up 65 with the last dart in hand to take a 7-3 lead at the second interval. In that session, Wright averaged 120, while Price, despite losing it 4-1, averaged 116.

The World Champion won another two legs after the restart, hitting double 16 for a 20 dart hold to take a 9-3 lead. The Iceman would not quit though, hitting finishes of 148, 127 and 80 in consecutive legs to make it 9-6. However, Wright would keep his nerve, finding tops at the fifth attempt to take a 10-6 victory over Price and reach the last eight.

Snakebite will face Steve West in the last eight, as he came through a European Championship classic against the in form Mensur Suljovic.

After sharing the opening two legs, West grabbed the initiative in the third leg, breaking the Austrian’s throw with a stunning 144 outshot. This seemed to set him up nicely for the rest of the match, reeling off two consecutive 14 darters to take a 4-1 double break of throw lead at the first interval.

West continued his power scoring after the break, producing 14, 14 and 15 dart holds to win the session 3-2 and take a 7-3 lead at the end of the second session. However, Suljovic fought back hard after the second break. After holding for 7-4, West missed double top for an 8-4 lead, which Suljovic punished with an 80 checkout to break throw. The Austrian would hold again, before West found a way to win the longest leg of the match, holding in 20 darts for an 8-6 lead.

Westy then missed three darts in the next leg to move 9-6 clear, and Suljovic held with an 88 shot to stay one leg, before hitting double nine to make the match level at 8-8. After two more breaks, the match entered a last leg decider, the only one of the matches to do so today. There, Suljovic set himself up on tops for the match, but West found a stunning 106 checkout to come through 10-9, sinking to his knees as he won a gripping contest.

James Wade won his round two game at the European Championship 10-8 against Nathan Aspinall. The Machine started brighter, capitalising on a missed dart from The Asp to break throw in the first leg, before producing a magical 161 to consolidate the break and go 2-0 ahead. Aspinall would win two legs himself to level, before Wade punished more missed darts at a double in the fifth leg, hitting double 10 to take a 3-2 lead at the first interval.

It was a similar story in the second session. Aspinall held reasonably comfortably on his own throw, but could not take one of the chances he carved out for himself on Wade’s throw. This meant that every leg was held in the session, with the Machine pinging tops to take a 6-4 lead at the end of the second interval.

The match then followed the same pattern after the restart. Once again, Aspinall continued to hold throw, but could not find the crucial break of throw he needed to level. He ended the match 8/27 on the doubles, as Wade found double 20 to take a 10-8 win.

The 2018 champion, who’s defending that money this weekend, will play William O’Connor in the quarter finals. O’Connor, who only qualified for the event after a positive COVID-19 test for Glen Durrant, was sensational in his 10-3 victory over Jamie Hughes.

The Magpie got off to the perfect start, soaring into a 5-0 lead thanks to Yozza missing seven darts at a double. Hughes would finally get on the board in the sixth leg, but would lose the second session 3-2, as O’Connor hit a 96 outshot to get another break of throw and lead 8-2 at the second break.

Hughes found a break of throw after the restart, before O’Connor put any hopes of a remarkable comeback away with a stunning 138 outshot to break again for 9-3 with Yozza left on tops. A 100 checkout saw the Magpie coast home, taking it out for a 10-3 and his maiden appearance in the European Championship quarter finals. He finished 10/20 on the doubles, with Hughes just 3/18.

Van Duijvenbode fights back to set up quarter final with Clayton

Dirk van Duijvenbode continued his excellent form to win a topsy turvy game 10-8 against Michael Smith. The Titan was out of the blocks quickest, winning the first three legs in 31 darts to take a 3-0 lead.

Smith would not let him get away though, and started to take control of the match. He reeled off three legs himself, before punishing missed darts at a double from van Duijvenbode in two consecutive legs to lead 6-3. The Aubergenius would stop the rot just before the second interval, hitting a crucial 86 checkout to trail 6-4. Five straight holds saw Smith lead 8-7, before crucial moments went in favour of van Duijvenbode.

First, Bully Boy missed bullseye for a 121, allowing van Duijvenbode to clean up 39 8-8. Then, Smith missed double 11 for a 124 in the next leg, and bust his score. The Titan then hit double five with the last dart to retake the lead 9-8. The World Grand Prix finalist then sealed the match with a stunning 110 checkout, to reel off four straight legs and beat Smith for the first time in his PDC career.

The match started evenly, with both players holding throw twice. However, Clayton would grab the initiative in the fifth leg, hitting double two to clean up 68 and break for a 3-2 first session lead.

The second session was a more even affair. With the score at 5-3 to Clayton, he punished two missed darts at double from De Sousa to get a double break and go 6-3 ahead. However, the Portuguese player would then punish a missed dart at double 18 from the Welshman, hitting 80 to break straight back and trail 6-4 at the second interval.

Four straight holds followed in the next session, before the crucial moment came in the 15th leg. De Sousa missed five darts at a double to trail 8-7, allowing Clayton to eventually ping double 18 to steal the leg and go 9-6 up. The Ferret would seal the deal in the next leg, hitting tops to win the match and move into the quarter finals.