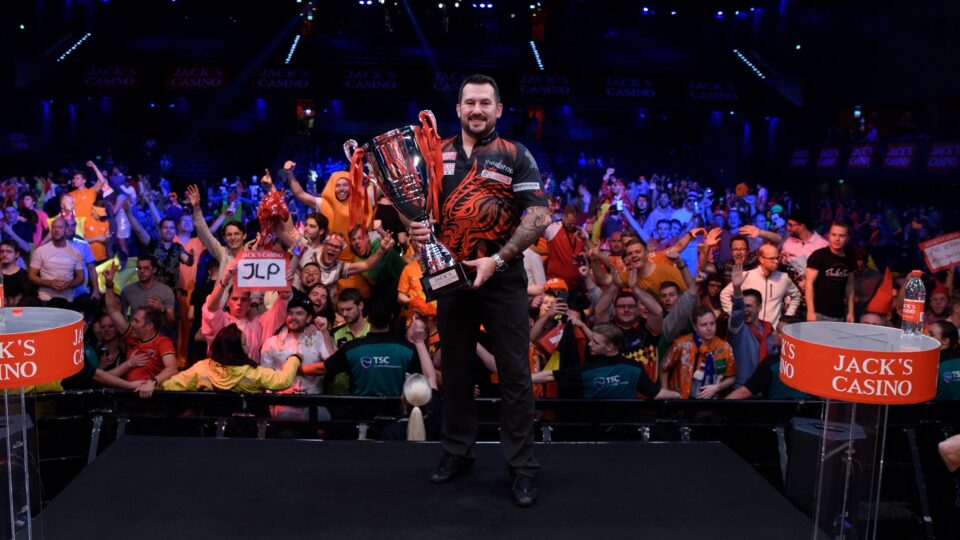 Peter Wright, Gerwyn Price and Michael van Gerwen headline the 24 player field at the AFAS Live.
Defending champion Jonny Clayton and Masters Champion Joe Cullen will also have their eyes on the silverware.

The Battle at the Top

The tournament represents a chance to lay down a marker to the rest of the world ahead of the hectic back end of the season. Following this weekend there are still 4 TV majors to play before the trip up Muswell Hill to Alexandra Palace.

In Price, MvG and Wright, the sport has a trifecta of talent that we are waiting to all hit top form simultaneously. To truly answer the question who is top dog?
For various reasons, we have been denied this over the last 2 or 3 years really. Covid-19 shutting down the world, followed by a combination of injuries and illnesses suffered by all three players, means the question of who is the best continues to provide a different answer.
But the pedigree, mentality and top level game these three posses, combined with the upward arc of their recent matches, mean they could be all set to peak at the same time, in the most crucial part of the season.

Peter Wright’s absence from the Australasia legs of the World Series means he is not included in the 8 players that receive a bye to round two.

Instead, Gerwyn Price and Michael van Gerwen are joined by Clayton, Cullen, Wade, Anderson, Van den Bergh and Michael Smith.
The upside to all 8 of these players in clear to see. They are littered with past success, and ability.

However, this season looks to have taken it’s toll on a fair few of these players.

James Wade had a promising first half of a Premier League campaign, but his form and results have taken a noticeable dip since he spent he fell in in Germany earlier this year.

Welshman Jonny Clayton also looked great throughout the Premier League group phase, but the the Ferret has been in high-demand this year, and he looks out on his feet an awful lot.

We’ve not seen a lot of Gary Anderson or Michael Smith in the last few weeks. The former master and apprentice duo are two of the biggest power scorers in the game. But titles have been difficult to come by for the pair who will need to bring their A games if they hope to walk away £70k better off.

The ‘best of the rest’ right now are arguably Joe Cullen and Dimitri van den Bergh. The Rockstar picked up a European tour title just two week ago, whilst The Dream Maker made his way to last weeks final only to be beaten by Peter Wright. Most encouraging for this pair is not their ability to win games whilst playing well. It’s the early match scraps that they continue to excel in.

Simon Whitlock vs Danny Noppert is the stand out tie on night one in the AFAS. Whitlock, one half of the World Cup winning duo, will have his work cut out against the Dutch number two. Especially if they are as hostile as they were at the Ziggo Dome earlier in the year. Add to that the consistency in the Noppert game, and this one has all the makings of a classic.

Sticking with Australian World Cup winners, Damon Heta will take on compatriot Gordan Mathers. GG was the inaugural winner of the Kyle Anderson award at the end of the Australia and New Zealand events. Given to the invitee that performed the best over the 3 competitions. That being said, Heta was desperately unlucky with his draws down under, and will be expected to make amends in Amsterdam.

Dirk van Duijvenbode and Vincent van der Voort join Danny Noppert as the home crowd favourites on night one. They play Haupai Puha and Matt Campbell respectively. Two talents that have benefitted from the continuous worldwide growth the PDC continues to enjoy, both in the World Series and World Cup.

Danny Baggish and US Darts Master Leonard gates will fly the flag for the USA. Baggish opens up against Ryan Joyce whilst Gates will face Devon Petersen. Two tour card holders that could do with a good result to springboard their seasons.

Of course, It wouldn’t be a World Series event post the 2019 World Championship without Fallon Sherrock.
The Women’s Matchplay winner has had a tough time in 2022 on the World Series, so far unable to match the heights that bought her international recognition for winning against Ted Evetts and Mensur Suljovic. The run to the Nordic Darts Masters final this time last year meant many had high optimism for Sherrock this year. However, a tough draw against Peter Wright means she is potentially one match away from a forgettable 2023 campaign.