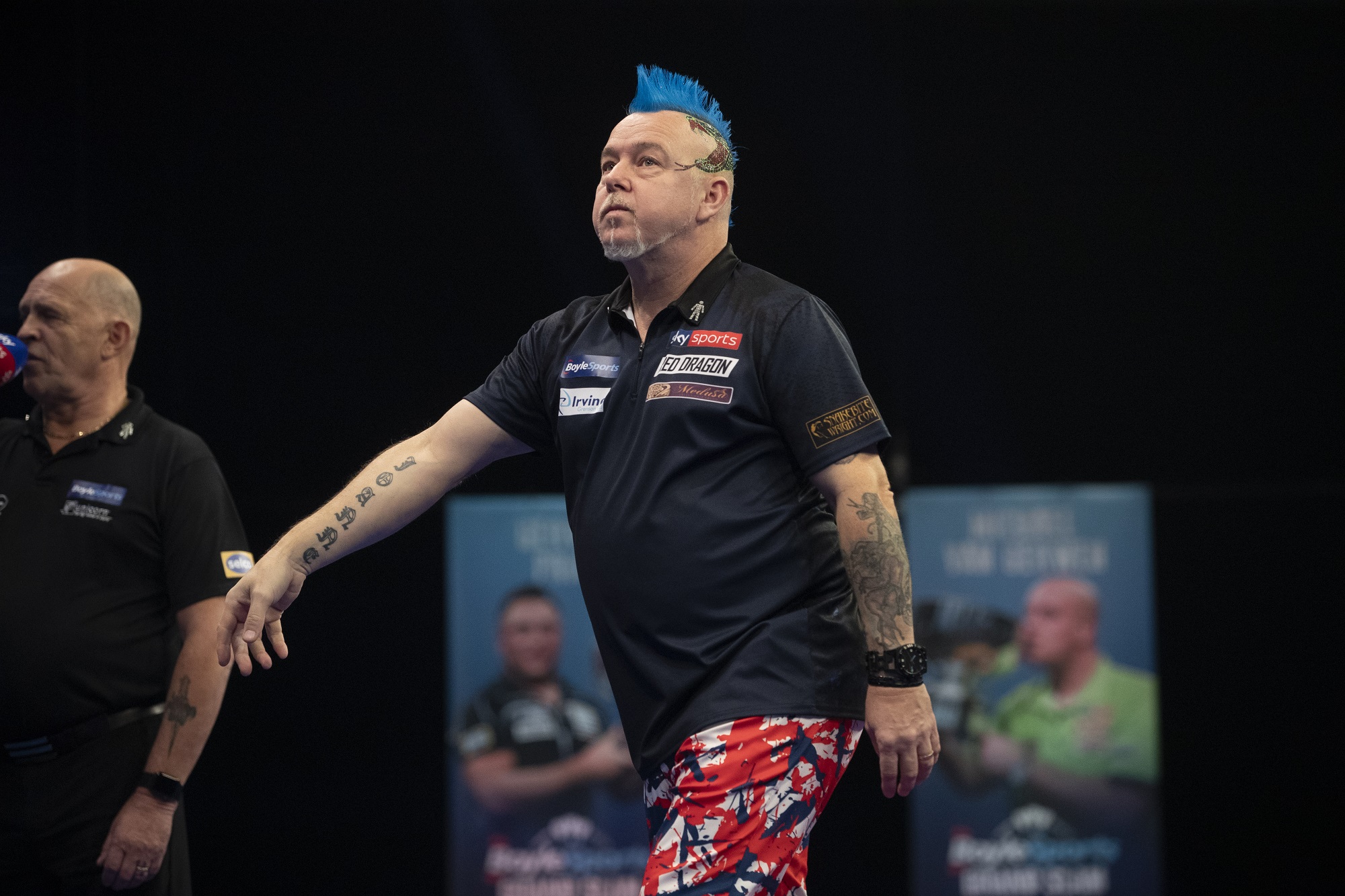 Peter Wright and Gary Anderson were the two big names to be sent packing on day one of the 2021 UK Open.

Wright, the winner in 2017, lost 10-5 to Dave Chisnall. Anderson was beaten in a last leg decider by Dirk van Duijvenbode.

Elsewhere, day one of the UK Open saw:

Wright and Anderson could not find their heavy scoring in their games, as the former World Cup winning pair for Scotland both crashed out.

Snakebite had no answer to Chisnall in the early stages of the match, going 5-1 down in the blink of an eye. However, the former World Champion fought hard, to go into the second interval trailing 6-4 after changing his equipment multiple times.

The big moment of the match came in leg 11, when Wright misses tops for a 66 shot. Chizzy found double four for a 14 dart break, to go 7-4 ahead before eventually cruising to a 10-5 victory. He faces Danny Noppert next.

Anderson faced van Duijvenbode in the first match of the evening session on the main stage. It looked comfortable for The Flying Scotsman early on, going 5-2 in front. However, the Aubergenius found his range, hitting an 11 darter, three 13 darters, and a 12 to win five straight legs and go 7-5 in front.

Anderson though fought hard, winning three straight legs to go 8-7 in front, before missing darts for the match in two straight legs. Van Duijvenbode levelled to force a decider, before hitting double three to avenge the loss in the World Darts Championship quarter finals. The Dutchman faces Jonny Clayton in a mouthwatering round five clash.

Smith and Van Gerwen battle through

Michael Smith was part of the game of the day in Milton Keynes against Joe Cullen.

Bully Boy went 5-1 down early on, as missed doubles allowed The Rockstar a big advantage. However, four straight legs, including a 170 outshot, saw Smith level up at 5-5.

The match deserved a last leg decider, and it got one. There, Cullen missed double 10 for a 128 and a 12 dart hold. Smith, who was on 41 after nine, took it out for an 11 darter to end a pulsating clash. Bully Boy takes on Jose De Sousa next, who also came through a fantastic last leg decider against Mervyn King earlier in the night.

Michael van Gerwen battled past Nathan Aspinall 10-8 in the fourth round of the event last year, before winning the title. He will be hoping history repeats itself, after battling past Scott Mitchell by the same scoreline.

Scotty Dog went 3-2 up, before Van Gerwen reeled off four straight legs to take a 6-3 lead. Mitchell though would not lie down, winning five of the next six legs to regain the advantage. A 101 checkout, with MvG on 32, saw him go in front 8-7, before his scoring deserted him. The Green Machine capitalised, hitting 16,14 and 16 darters to win three consecutive legs and go through 10-7. He faces Mensur Suljovic in the next round.

What else happened on day one of the UK Open?

On a very busy day one of the UK Open, John Brown and Alan Soutar were two unexpected players to make round five. Brown came from round one, before beating Mark McGeeney 10-6 in round four to make the last 32. He takes on Chris Dobey next.

Soutar continues to impress in his PDC debut. He saw off Raymond van Barneveld on the main stage in round two, before wins over Mickey Mansell and Stephen Bunting secured him a spot in the fifth round. He takes on Ron Meulenkamp and will be looking to make the last 16.

World Champion and World Number One Gerwyn Price also made it to the last 32, defeating Peter Hudson 10-5. Nathan Aspinall though dropped outside the world’s top 10, losing by the same scoreline to a clinical Krzysztof Ratajski.

Finally, it was an eventful day for Sebastian Bialecki. The young Polish star hit a nine dart finish against Jim McEwan in round one, before seeing Jitse Van der Wal hit one against him in round two. Bialecki made round four, before losing to Mensur Suljovic.

Fifth Round Schedule of Play

The UK Open will be live on ITV in the UK. You can also watch it outside the UK via the PDC’s broadcast partners, such as RTL or DAZN.

We’ll have you covered here at Online Darts, with reaction with game winners from Milton Keynes. Head over to our YouTube channel and hit subscribe so you don’t miss a video.

Also on our YouTube channel, we’ll have live watchalongs of Friday and Saturday’s play when there’s more than one board in play. We’ll be watching all the boards with you, giving you every result as it happens.

We’ll have a live blog for you every session of the tournament, so you don’t miss a moment even if you cannot watch live.

We also produce the UK Open Daily podcast. This round up show will feature reaction, news and debate from Friday and Saturday of the event. It will be available across all good podcast channels the morning after each day’s play.

Follow all the drama of the UK Open with us here at Online Darts.