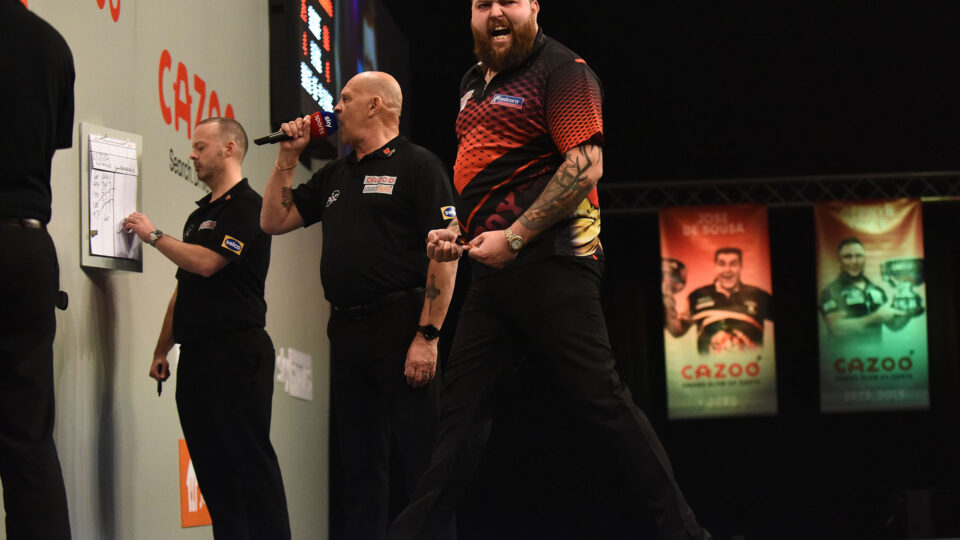 Wright and Smith win their Quarter-finals at Grand Slam of Darts.

Peter Wright defeated Fallon Sherrock, as Michael Smith finally got the better of MvG on a TV stage, on a fantastic night in Wolverhampton.

The pair will meet in Sunday afternoons semi finals, with Price and Wade meeting in the opener on Sunday

Michael Smith started the game in style hitting four 180’s in the first five legs and after punishing missed darts from MvG, he won the first session 5-0.

The Green Machine came flying out after the break and hit a 148 checkout to get his first leg on the board. The impressive finishes continued with a 164 from Michael van Gerwen at the end of the session to go in just 6-4 behind.

The four legs after that were all won with breaks of throw. Smith then got an important hold. A potential turning point in the game came with MvG reeling in the big fish with Smith sitting on 130. That reduced the deficit for MvG to four, going into the last break 12-8 down.

With MvG unable to get close to Smith, Bully Boy had match darts to win 16-12 but misses his first opportunity.  He didn’t make the same mistake in the next leg and he wrapped up an outstanding win against Michael van Gerwen. Now everyone will be waiting to see if Bully Boy can push on and lift his first PDC TV title.

Peter Wright defeats Fallon Sherrock 16-13 in the quarter finals at the Grand Slam of Darts. Peter Wright averaged just over the 100 mark with Fallon just falling order in one of her best performances on TV.

Fallon got started the game well with an early break with a 119 checkout. Peter was able to break straight back but Fallon went into the break 3-2 up.

Peter Wright then reels off four of the next five legs to get a two leg lead for the second interval. In leg 14 Fallon had three darts to level the game back up but after missing those Peter punished and we saw all five legs go with throw.

The theme continued with us getting to nine straight holds until Peter broke with an 11 darter. He found another one and a 10 dart leg in the fourth session to take the lead 12-8.

When Peter got to 14, Fallon found a little run of three straight legs to close the gap to just one, but that was the push that Peter needed, and he wins the last two legs to set up a semi-final with Michael Smith.