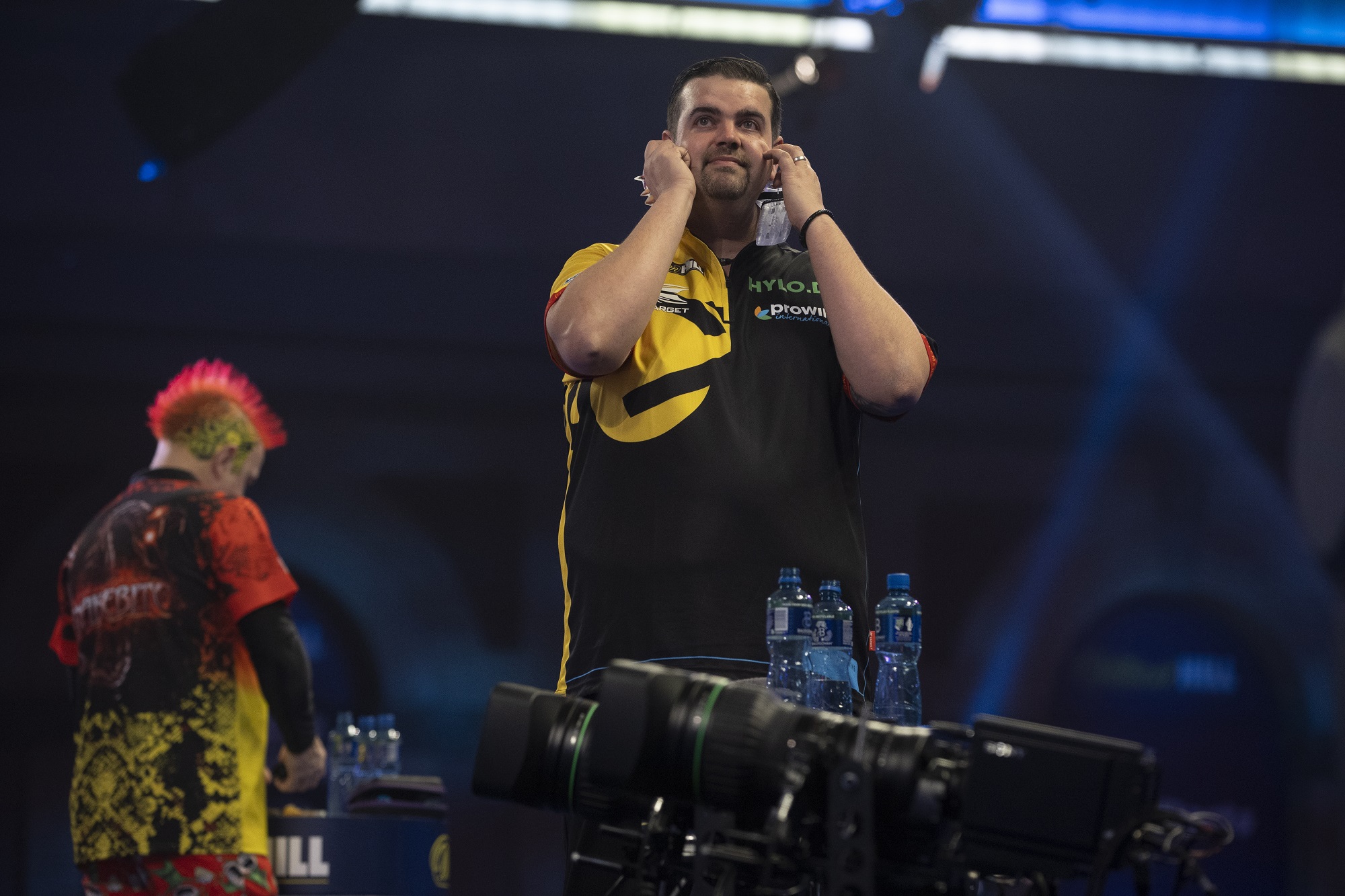 Gabriel Clemens produced the biggest win of his TV career, knocking out Peter Wright on day ten to make the last 16 of the 2021 World Darts Championship.

Germany’s number one held his nerve in a seven set thriller, beating the World Champion 4-3 to blow the bottom half of the draw wide open.

Peter Wright had high hopes of defending his World Darts Championship, but he crashed out to Germany’s number one

The first set turned in the third leg. With the score at 1-1, Clemens missed three to hold throw. Snakebite punished the German Giant, hitting double 18 to break, before an 80 checkout saw the Scot take a 1-0 lead.

However, Clemens would not go easily. A 13 darter saw him break in the opening leg of the second, before an 11 darter saw him go 2-0 ahead. Wright would hold, before missing three darts to send it to a deciding leg. Germany’s number one then took out a 47 shot, to hold and level the match 1-1.

The German continued to punish missed doubles from Wright. The World Champion squandered nine darts across the third set, having chances to win every leg, Clemens whitewashed him 3-0 to take a 2-1 lead. Clemens went 2-0 ahead in the fourth, before missing two for another whitewash set. Snakebite would clean up 25, before checkouts of 98 and 120 levelled up the contest for Wright at 2-2.

It was Snakebite’s to lose a 2-0 lead in a set next. Having gone ahead, a 144 finish saw Clemens get back into the set, before Wright missed bull for a 130 outshot for the set. The German pinged an 84 shot to level, and then hit a 126 to hold throw and go 3-2 ahead. Snakebite though would force a deciding set, winning the sixth in just 41 darts.

The final set saw both players hold twice, meaning it would go down to the fifth and deciding leg. There, Clemens set up 38 on 126, and when Wright could not finish 131, the German returned. He split, hitting single 6, double 16, to round off the match 4-3 for the biggest upset of the tournament thus far. Clemens will face Krzysztof Ratajski in round four.

Michael van Gerwen had a far more easy evening. He beat Ricky Evans 4-0 in the last 32 for the second straight year.

MvG took control from the start. At 1-1 in the first set, he found a 10 darter on tops to break, before punishing a missed dart at double seven from Rapid Ricky. He hit a 92 outshot to go 1-0 ahead. Evans went 2-1 ahead in the second set, before Van Gerwen showed his class. After the Kettering man missed bull for a 167 that would have levelled the contest, The Green Machine found an astonishing 150 outshot to level, before hitting an 11 darter to hold and take a 2-0 lead.

Evans hardly put a foot wrong all game, and once again went 2-1 up in a set. However, the three time World Champion produced a 15 darter to hold, followed by a 14 darter to break on double 16 to go within one. It was to be another 3-2 set that ended the game. MvG went 2-0 ahead, before Evans reeled off two straight legs to force the world number one to serve it out. The Dutchman did so, finding a 13 dart leg to win the set 3-2 and the match 4-0. MvG, who averaged 106.85, faces Joe Cullen in round four.

Joe Cullen survived a fightback from good friend Jonny Clayton to win a topsy turvy contest 4-3. It means The Ferret is into the last 16 of the World Darts Championship for the first time.

Clayton got the first break of the match, punishing four missed darts from Cullen to go 2-1 up in the opening set, before missing two darts to win it. The Rockstar found double six to level, before hitting a 103 checkout for a 12 dart leg to take a 1-0 lead.

The Yorkshireman continued to punish missed darts from the Welshman, breaking in the first leg of the second set after Clayton squandered two for the leg. Two comfortable holds followed for Cullen, winning the set 3-1 and moving halfway to the match.

Clayton though would not go quietly. After Cullen missed three to take the first leg of the third set, The Ferret found a 106 checkout out of nowhere to break The Rockstar’s throw. A comfortable 14 dart leg, followed by an excellent 114 outshot, saw him take the third set 3-0 and trail 2-1 in the match. Four breaks of throw, including a 110 outshot from Cullen, saw the fourth set level at 2-2. In the deciding leg, Cullen missed two darts to take a 3-1 lead and The Ferret punished, hitting double four for a crucial 21 dart hold and a level game at 2-2.

That then set up a seventh and deciding set, in which Clayton went 2-0 up with 120 and 106 checkouts. However, Cullen would level at 2-2, to set up a deciding leg. In a tense affair, Clayton left himself tops for the match, before Cullen pinged in a fantastic 100 finish by hitting two double 20s, to survive an incredible game 4-3 and set up a meeting with Van Gerwen.

Ryan Searle matched his best ever run at the World Darts Championship, defeating Kim Huybrechts 4-2 to make the last 16 on day ten.

Huybrechts had a chance to break in the opening leg of the game, but missed double 16 for a 112. It was the only dart at double he’d get in the set, as Searle produced three straight 17 darters to win it 3-0 and go 1-0 ahead. Roles reversed in the second set, as The Hurricane capitalised on five missed darts from Heavy Metal, to level up the match in 45 darts.

Searle would find another whitewash set, winning the third in 49 darts to take a 2-1 lead. After finding a fantastic 11 darter to break in the opening leg of the fourth, he held throw twice, punishing eight missed darts at double from Huybrechts in the fourth leg to go within a set of the match.

The Hurricane was fuming as he walked off stage, but stayed in the contest at the start of the fifth set. He took advantage of two missed darts at tops from Heavy Metal to break, before holding throw twice, winning the set 3-1 after Searle missed yet more chances at double.

Krzysztof Ratajski and Dimitri Van den Bergh won their round three games 4-0, taking advantage of poor finishing from their opponents to book their places in the last 16.

Ratajski took on Simon Whitlock in the opening match of the day, and the first set foreshadowed what was to come. The Wizard had chances to win three of the four legs, but could only take one of them. The Polish Eagle eventually found double 10 for a 21 dart break to go 1-0 in front.

Poland’s number one then hit a 121 in the first leg of the second set to get the early break, before Whitlock punished missed darts at a double from Ratajski to level. However, the Polish Eagle put that behind him, hitting 13 and 15 darters to take another set 3-1 and go 2-0 ahead.

Whitlock once again had chances to win the first two legs of the third set, but missed 11 darts to do so. This allowed Ratajski to go 2-0 up in 33 darts, before The Wizard won back to back legs to level. However, the Australian could not punish two missed darts from Ratajski in the deciding leg, missing tops for a 120 finish. The Polish Eagle then came back to find double 16 for a 16 darter, to win the set 3-2 and go 3-0 up.

The fourth set saw one hold and one break from each player, leaving the score at 2-2 and forcing a deciding leg. There, Whitlock missed tops for a 76 shot to extend the match, ending up just 6/29 on the outer ring. Ratajski would then clean up 16 on double four, to win another set 3-2 and complete the whitewash, setting up the showdown with Clemens in round four.

For Dimitri Van den Bergh, it was slightly more comfortable against Jermaine Wattimena.

Wattimena came out the blocks firing, leaving 87 to break in the opening leg. However, he then missed four darts to do so, as Van den Bergh eventually hit double eight to clean up 25 and steal it. The Dream Maker would eventually win set one 3-1 on double nine, with Wattimena missing double 18 for a 116 shot. The World Matchplay champion then doubled his advantage with three straight 15 darters on throw, hitting an 80 outshot to go 2-0 up.

The Dutchman was clearly frustrated at the start of the third set, and was even more so when he missed three darts to take the opening leg. Van den Bergh punished him with a 74 outshot on double 16 to break, before finding a 128 finish to go 2-0 up. The Belgian held throw in the fourth leg, hitting double eight to go within one of the match. That seemed to really hurt Wattimena, as Van den Bergh wrapped up the fourth set in 48 darts to take the win. He’ll face either Dave Chisnall or Danny Noppert in round four.