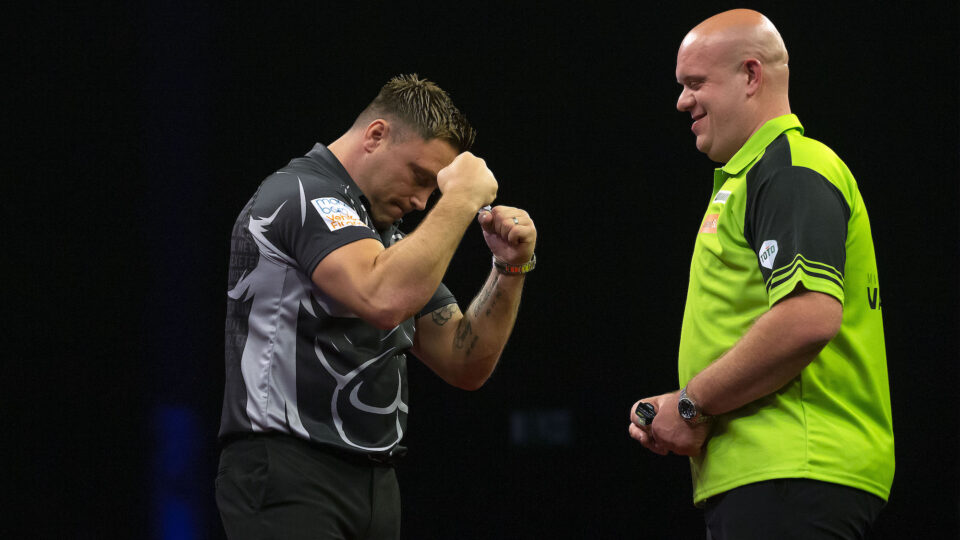 Gerwyn Price will take on Michael van Gerwen in Sunday’s Betfred World Matchplay final, as two of the sport’s premier players collide in a Blackpool blockbuster.

Price landed his fourth televised nine-darter of 2022 on a sensational night of semi-final action on Saturday, defeating UK Open champion Danny Noppert 17-11 to book his place in a first World Matchplay final.

Price Looking To Add Matchplay Title To His Collection

Price has already broken new ground in Blackpool, becoming just the second Welshman to feature in a World Matchplay final, after Richie Burnett succumbed to Phil Taylor in the 2001 showpiece.

The 37-year-old had failed to progress beyond the quarter-finals in seven previous appearances, but he’s produced a series of sublime displays at the Winter Gardens to regain the world number one spot.

Price then landed the first nine-darter at this event since 2018 in his last four clash against Noppert, to set up a fascinating showdown against Van Gerwen, in the pair’s first final in front of the Sky Sports cameras.

Van Gerwen hasn’t hit the same heights as Price throughout the week, but the Dutchman is eyeing another slice of history in his fourth Winter Gardens final – his first since 2016.

The three-time World Champion averaged 101.86 against Aspinall – his only ton-plus average of the tournament so far – before denying Van den Bergh in a gruelling battle of the former World Matchplay winners.

Van Gerwen is featuring in only his second event since undergoing arm surgery last month, which took place a matter of hours after he clinched his sixth Premier League crown in Berlin.

The Dutchman enjoyed a remarkable 19-match unbeaten run against Price before the Welshman beat him at the 20th attempt at the 2019 Grand Slam of Darts, and they’ve since shared seven wins apiece.

Odds courtesy Betfred and correct at time of writing. Subject to fluctuation.