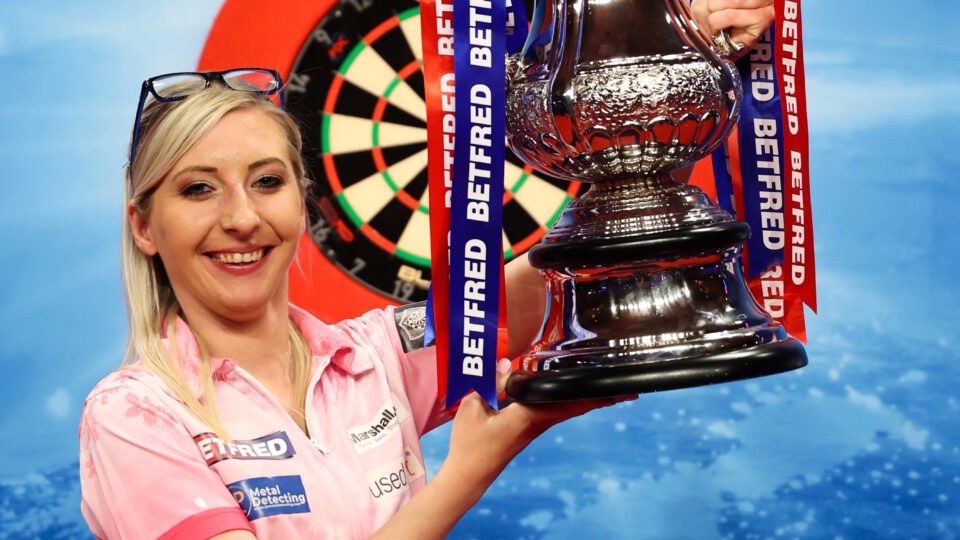 Fallon Sherrock won the games on Sunday afternoon at the Winter Gardens to lift the first Women’s World Matchplay title and book her place in the 2022 Grand Slam of Darts.

Fallon Sherrock created another slice of history to claim the inaugural Betfred Women’s World Matchplay title at the Winter Gardens on Sunday afternoon.

The Queen Of The Palace defeated Dutch star Aileen de Graaf 6-3 in Sunday’s showpiece to claim the £10,000 top prize and seal her spot in November’s Grand Slam of Darts.

The 27-year-old also defeated Katie Sheldon and Lorraine Winstanley to prevail in the historic eight-player event, the first fully-televised women’s tournament staged by the PDC.

Aileen De Graaf looked set to upset the odds after opening up a slender 3-2 lead in the final, only for the history-maker to reel off four straight legs in the latter stages to write another famous chapter in her darting story.

De Graaf converted a classy 100 combination to draw first blood, but Sherrock responded strongly, following up a 17-dart riposte with an 86 checkout via double seven to move 2-1 ahead.

The Queen of the Palace appeared poised to extend her lead after crashing in the first maximum of the contest, although she was punished for squandering six darts at double as De Graaf levelled.

The fourth seed continued her clinical combination finishing to edge 3-2 ahead, only for Sherrock to follow up a second 180 with a brilliant 142 checkout to restore parity at three apiece.

Sherrock was beginning to dominate the scoring phase, claiming a crucial break of throw in leg seven, before following up back-to-back 140s with a two-dart 66 finish to complete a 14-dart hold and move a leg away from glory.

De Graaf was unable to prolong the contest with a 120 skin-saver and Sherrock required no further invitation, producing a superb 85 checkout via double five to seal the deal.

Earlier in the afternoon, Sherrock survived a scare against 18-year-old sensation Sheldon, recovering from 2-1 behind to book her spot in the semi-finals.

The Irish teenager converted 86 and 74 checkouts in successive legs to stun the second seed, but Sherrock responded with a 113 finish in leg five, reeling off the last three legs to progress.

The Milton Keynes ace then overcame a late wobble to see off third seed Winstanley in the last four, having spurned three darts at double for a whitewash win.

Sherrock started brilliantly to storm into a 4-0 lead, and although Winstanley fought back to halve the deficit, the 27-year-old fired in the tournament’s first 180 before wrapping up victory with her seventh match dart.

De Graaf – a four-time TV title winner – was unable to claim the £10,000 top prize in a compelling contest, but she reaffirmed her credentials with a series of impressive displays.

The 32-year-old produced the performance of the quarter-finals to dispatch Laura Turner 4-1, firing in a brilliant 171 and landing two 140s to prevail with an 80.63 average.

She then dumped out top seed Lisa Ashton in a dramatic nine-leg tussle, producing some magnificent treble 19 hitting in the latter stages to close out a deciding-leg victory.

Ashton and Winstanley Made The Last Four

Ashton, the winner of seven Women’s Series titles in 2022, opened her campaign with a whitewash win over Scottish teenager Chloe O’Brien, before succumbing to De Graaf in a dramatic semi-final showdown.

Elsewhere, Winstanley defied a spirited fightback from Wales’ Rhian Griffiths in the other quarter-final tussle, eventually advancing in a last-leg shoot-out.