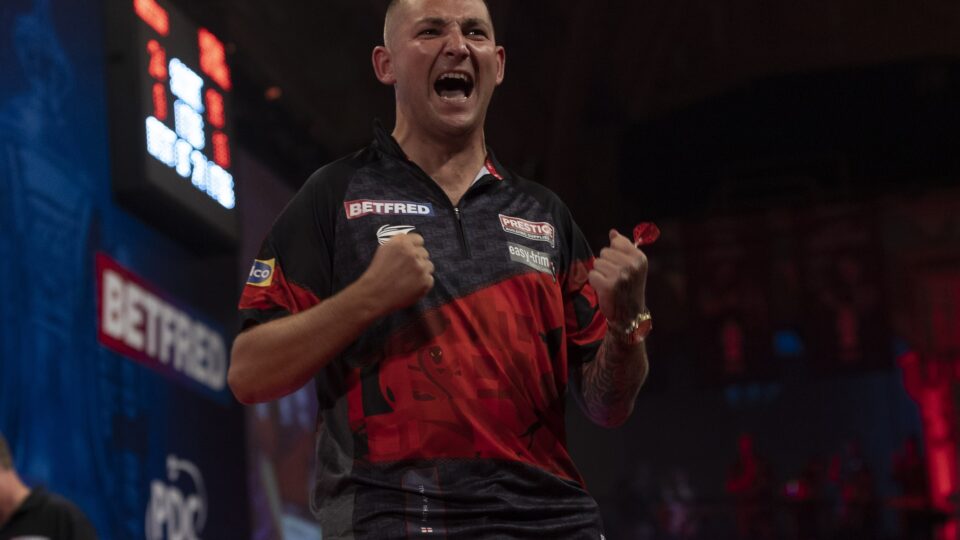 Nathan Aspinall had to dig deep to book his place in round three. He fought back from 2 sets to one and 2 legs down to defeat Joe Murnan, on day eight of the 2021/22 PDC World Darts Championship.

This was our first day consisting of only round two matches and we saw a mixture of classics and walkovers.

Elsewhere on day eight, we saw;

Sporting a heavily strapped right arm, Nathan Aspinall came within a whisker of being the latest seed to fall at their first hurdle. However, always up for a fight, the Stockport man found another gear and eventually got over the line 3-2.

Murnan took advantage of a missed set dart from Aspinall in set one to take the lead in the match, before The Asp fired back in set two to level.

Missed darts at double in set three allowed Murnan to once again take the lead at 2-1. He then opened up a two leg lead in set three, and even had a dart at double 20 for the match in leg 4, missing it high.

That would be the last opportunity Murnan would get, as Aspinall took the next two legs to level at two sets each, before dominating the final set 3-1 to book his place in the next round. It wasn’t always pretty but Aspinall finished with eight 180s and two ton plus finishes.

Cullen edges past Williams in thriller

The afternoon session certainly saved the best until last as Joe Cullen twice came from behind to defeat Jim Williams 3-2.

Welshman Williams was very impressive in the opening set as he took it 3-0, in legs of 14, 16 and 16. In the process he limited Cullen to only one shot at the bullseye.

A 130 checkout in the opening leg of set two sparked Cullen into life and he gave Williams a taste of his own medicine, as he handed a whitewash straight back to level things up at 1-1.

Williams went back infront courtesy of a classy 119 checkout for a 3-1 win in set three, before Cullen started to find his range on the treble twenty in set four. He hit two 180s in the opening leg of the set on his way to a ten darter, before taking the set 3-0.

And so, to a decider they went. Cullen struck first, another 180 on his way to a 13 dart first leg. The Welshman didn’t give in though, firing in a 174 and a 171 in an 11 dart hold to level. Cullen wasn’t to be denied though as he held throw for 2-1 before hitting his eighth 180 to set up double four for the match, and then taking it out first dart.

It was a match of what might have been for Boris Koltsov, as he performed admirably before eventually succumbing 3-2 to Dirk van Duijvenbode.

The Aubergenius wasn’t at his violent best, both players missed a number of opportunities, but Koltsov will be the one left rueing such opportunities.

After a tight opening set, which featured four breaks of throw before Dirk held in the leg five to go 1-0 infront, the Russian took the next two sets to go one away from victory. He also held the throw in the crucial fourth set.

When he misses double 20 to go one set away from the match, his Dutch opponent pounced to break throw, before holding to level the match once more.

Both players showed incredible spirit to share the first four legs of the decider. It was Dirk who then held once more, before Koltsov missed five darts to level once more. This time there was no let off. Dirk came back for 38 and took it out first dart hand.

Elsewhere on Day Eight at the PDC World Darts Championship

Fallon Sherrock conqueror Steve Beaton couldn’t raise himself to the levels of Sunday evening. In a game that featured 62 missed doubles between the two players, there just didn’t seem to be the same focus from the former World Champion.

Despite Beaton winning the opening set, it was the Belgian, Huybrechts, who got over the line by three sets to one. The doubling percentages were remarkably similar, but it was Kim who gave himself more opportunities due to his better scoring and that told in the end.

Rounding off the night, we saw another seed fall. Simon Whitlock was defeated 3-1 by Martijn Kleermaker. The debutant, who missed out last year, held it together to defeat the Australian, winning the final two sets.

The final leg saw Whitlock miss a dart at double 18 to extend the match before a timely dropped dart allow the big Dutchman to compose himself before hitting double ten for the match.

The first three matches of the day were all very one-sided affairs. Ryan Searle opened up the day with a solid performance in defeating nine dart hero Willie Borland by three sets to nil.

It wasn’t spectacular from the recent Players Championship Finals runner up, but he did what he needed to as Borland struggled to hit the heights of the first round, averaging just 77.69.

The second match of the day saw William O’Connor comfortably defeat Glen Durrant by the same scoreline of 3-0. Duzza’s struggles have been well documented, and although he looked in confident mood as he made his way to the stage, the performance was more of the same.

He never really got going, winning just the one leg. His struggles seemed to visibly affect his opponent who did well to remain professional and close out the victory.

Perhaps the shock of the afternoon, not so much in the result but the manner of the result came in game three. Luke Humphries v Rowby-John Rodriguez looked like one of the ties of the day.

This didn’t materialise though, as the Englishman completed the third straight whitewash. Rodriguez only marginally improved on Duzza before him, as he won just two legs in the match.