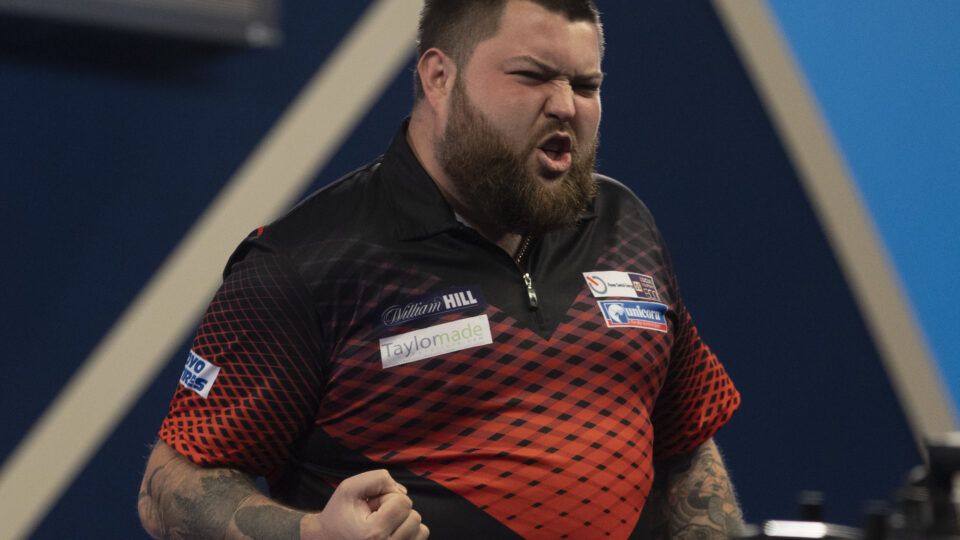 Round one of the PDC World Championship finished on Day Seven of the tournament.

Alexandra Palace was in it’s usual fine voice, as top stars such as Michael Smith, Dave Chisnall and Dimitri van den Bergh all got their campaigns underway. However the young Belgian became the highest seeded casualty of the tournament when he was beaten by Florian Hempel.

Arguably, the day of the game was contested by Mervyn King and Ryan Joyce. Relentless lead 2-0 in sets after an all out barrage on King to start the match. But Merv responded by winning 9 straight legs against his younger compatriot to win the match.

Michael Smith produced the highest average of the tournament so far. A 106.32. As he allowed Ron the Bomb Meulenkamp just one leg in their match.
Dave Chisnall also completed a whitewash victory against Mike De Decker, on a day where we saw 6 matches all won in straight sets.

Elsewhere on Day 7 we saw:

Michael Smith sent out an early warning to the rest of the field, as he produced a 106.32 average to defat Ron Meulenkamp in straight sets.

Smith allowed Meulenkamp to win just one leg in the contest. The Dutchamn winning leg three of the second set as he attempted to work his way in to the match. That would be the only time Meulenkamp hit the outer ring, as Smith limited him to just two attempts in the contest.

Bully Boy impressed in both the scoring and the finishing department, throwing 6 maximums and finishing with an exceptional 75% double success rate. The Englishman seemed to get better as the contest went on, wrapping up the match with a 3rd set that required just 37 darts. An average of 121.86!

Pre-Tournament world number five Dimitri van den Bergh became the biggest casualty of the tournament so far. The former World Matchplay Champion entered this years tournament having been in two televised finals already this year. He will not add to that tally however, as German sensation Florian Hempel beat him 3-1.

Hempel, a former professional hand ball player, has been a revelation on the PDC circuit this year, and continued his ascension with an excellent victory against Van den Bergh.

The German won the first set in a 5th leg. Recovering from 2-1 behind and hitting a 12 dart leg against the throw to wrap up the set. The Dream Maker responded by winning set 2 in double quick time. Winning all 3 legs in 39 darts.

With a lack of bog stage experience in darts for Hempel, Dimitri returned from the interval as a big favourite for the match. But Hempel mimicked Michael Smith’s finishing stats from earlier in the night, hitting 9/12 darts at the outer ring under pressure from his opponent.

King Fights Back to beat Joyce.

After two sets in this match you could have been forgiven for chalking up a victory for Mervyn King. Not through any fault of former World Masters winner though. Ryan Joyce just took to the stage hitting every thing in sight. Hitting his opponent with numerous blows.

Relentless won the opening 2 sets dropping just one leg to his opponent. The man from the North East returning from the second interval averaging 106.

From winning one leg, to losing none. What happened next was a complete turn of events. Mervyn King won 9 consecutive legs to win the final 3 sets available. A run that started with an excellent 120 checkout, and ended more often that not with his less favoured double 20.

Every single other game played on day seven was won in 3 sets.

Raymond Smith produced an upset in beating Devon Petersen in straight sets. The Australian was impressive in beating Jamie Hughes in round one, and carried that impressive form in to a Petersen matchup to close the evening. It’s no secret that The African Warrior has had his struggled this year, with injury playing a big part in a drop of form. But Smith came in to the match to do a job, and that’s exactly what he did. Producing another average in the 90’s with a very respectable 56.3% on the doubles.

Lewy Williams defeated the disappointing Toyakazu Shibata to start the day. The Japanese player way below the level seen from him in qualifying for the World Championships never really pushed the new Prince of Wales, as he set up a second round match with Gabriel Clemens on Thursday,

Jason Lowe was the final victor of the first round. He too was very comfortable against his opponent, Sweden’s Daniel Larsson. That despite a terrible first leg in which Lowe missed 12 darts at a double before eventually hitting double one.

Dave Chisnall’s campaign began in true Chizzy style. Hitting 4 maximums, including his first 3 darts of the match, to beat Mike De Decker.
Both players finished the match with exactly the same average (96.43). The statistical rarity coming despite a gulf in legs won, and attempts at a double.