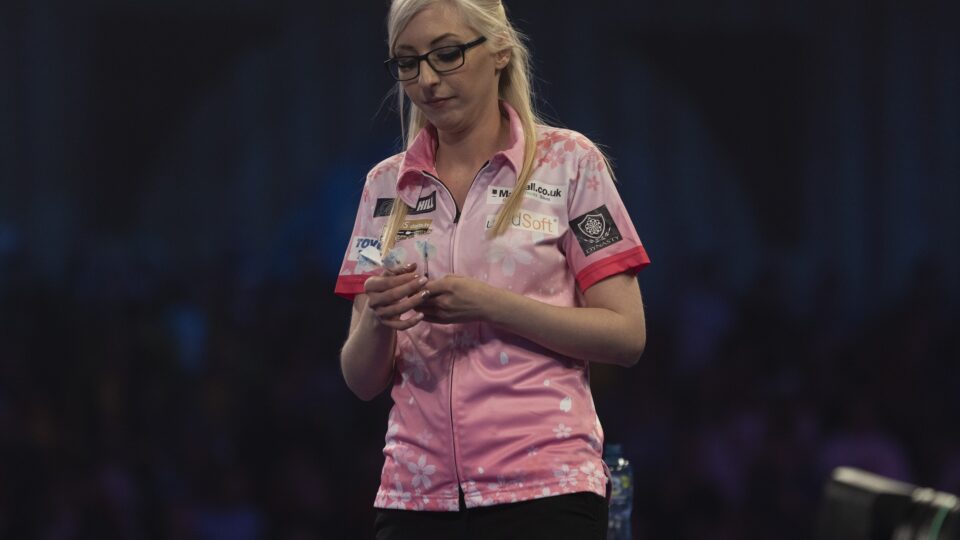 Sherrock, who made her name with a run two years ago that saw her beat Ted Evetts and Mensur Suljovic, came up against an inspired Beaton on her return to the Alexandra Palace stage. She could not repeat the feat of the 2019/20 tournament, as she lost 3-2 to The Bronzed Adonis.

In the round two games, Jonny Clayton beat Keane Barry 3-2 in an epic to move into round three, but the other seed in action today, Stephen Bunting, lost 3-2 to Ross Smith in another brilliant game.

Making a record breaking 31st appearance at a World Darts Championship, Beaton used all that experience to get over the line in an excellent game.

Sherrock got off to the perfect start, winning the opening two legs of the first set. However, after he held, Beaton produced checkouts of 99 and 126 to steal the lead. The second set went to a decider and despite producing a set average of 106.5, Beaton could not extend his advantage. He missed the bull for an 81 shot, and The Queen of The Palace took out tops to level.

The third set saw Sherrock slightly go off the boil, and Beaton capitalised, whitewashing his opponent to go 2-1 in front. Roles reversed in the fourth set, as The Queen of The Palace took advantage of a poor scoring set from The Bronzed Adonis, whitewashing him to level at 2-2.

Both held to start the deciding set, before Beaton held again to move 2-1 in front. However, when Fallon could not hit a 112 for the match, The Bronzed Adonis cooly took out double 16 for a 68 shot to wrap up a brilliant match. He plays Kim Huybrechts on Thursday evening.

Jonny Clayton also had to dig deep to win his contest. He came through a barnstormer against Keane Barry to move into the third round.

A 104 finish from Dynamite saw him break The Ferret’s throw in the opening leg. However, finishes of 116 and 136 ensured Clayton won the first set. Clayton then broke at the start of the second set, before a 121 finish from Barry got him level. Two holds followed, before the young Irishman hit double four to level.

Three ton plus outshots for Barry, of 100, 114 and 122, won him the third set and it looked like the BoyleSports World Grand Prix champion was on his way out of the tournament. However, shots of 101 and 100, the eighth and ninth of the game, helped win him the fourth set and drew him level.

It set up a deciding set, which Clayton started brilliantly, hitting a 150 outshot to take the lead, the 10th 100+ checkout of the game. 25 darts later, he wrapped up the final set on double 12, bringing a cracking game to it’s conclusion. The Ferret ended with a 103.70 average, the highest of the event so far.

Smudger, who saw off Jeff Smith to make round two, started the better. He whitewashed the opening set, hitting double eight to complete it. He then took a 2-0 lead in the second set, but missed eight darts across three legs to double his advantage. Bunting then eventually found double 16 to complete the comeback, and level the match.

Smith squandered five darts to win the opening leg of the third, and The Bullet took advantage once again, hitting a fantastic 150 checkout to break. Two further holds saw him go ahead 2-1, but Smudger did not back down. A 107 outshot, followed by a 64 and a 10 dart leg, levelled the match at 2-2 and sent into a final set.

Two holds from each forced the game into a tiebreaker, where Smith found two sensational checkouts. He hit an incredible 167 to hold, and with Bunting on 50, hit a 102 on double 11 to end a fantastic contest and win 3-2. It’s the first time Smudger has made the last 32 of the tournament.

While Smith made it into round three, Florian Hempel produced some astonishing checkouts to beat fellow German Martin Schindler 3-0 in round one.

It was Hempel who got off to the brighter start, banging in a 156 checkout to take the first set 3-1, in which neither missed a dart at a double. He then found a 158 to break the Schindler throw in the second set, but missed eight set darts in the next leg.

The Wall eventually levelled up on double nine to force a decider, in which he missed two set darts to level. Hempel, who missed a further four, eventually hit double two to deservedly go two sets up.

Three holds followed in the third set, before Schindler let himself on 42 to try and force another deciding leg. Hempel though would not allow it, as he hit a 114 checkout, his third ton plus of the match, to end the contest. He takes on Dimitri Van den Bergh on Tuesday evening in the second round.

What else happened on day five of the PDC World Darts Championship?

Alan Soutar fought through a tough contest on debut to win against Brazil’s Diogo Portela. Portela won the opening set, before back to back 3-1 sets saw Soutar go 2-1 ahead. However, in the final of the fourth set, the Brazilian found a fantastic 11 darter to level the match.

Scotsman Soutar broke at the start of the fifth set though, and despite an excellent 124 outshot from his opponent, found two holds of throw on double 16 and eight respectively to eventually take a 3-2 victory. He plays Mensur Suljovic on Thursday afternoon in round two.

Kleermaker won the opening set with an excellent 156 checkout, before taking out 43 to double his advantage. Michael reeled off three straight legs to win the third set with the crowd on his side, but Kleermaker matched the feat to take the fourth set and the match. The Dutchman now faces Simon Whitlock on Wednesday evening.

Maik Kuivenhoven won his first ever game at the World Darts Championship, beating Ky Smith 3-1 in the opening match of the day.

19 year old Australian debutant Smith was wayward on his scoring attempts for most of the opening two sets, allowing Kuivenhoven to win six of the first seven legs to 2-0 in front. Despite winning the third set, which included a 116 checkout on double one, Smith could not launch a comeback, as the Dutchman found double 12 in the fourth leg of the fourth set to complete the win. Kuivenhoven takes on James Wade in round two tomorrow night.