The BoyleSports World Grand Prix kicks off on Monday at it’s ‘temporary’ home in Leicester. So let’s have a look at this years version of the wackiest tournament format in darts.

Jonny Clayton absolutely smashed Gerwyn Price in last year’s final. Who could forget when he hit a 164 to back up a 170? But the 2021 version of the Ferret was a different animal to this year. He has won on TV recently, but it was a World Series in Australia- so let’s say he’s not won a ranked one yet.

So drawing Dirk van Duijvenbode isn’t the greatest bit of luck for him. The Titanic Dutchman recently made a TV final, only being pipped by The Iceman in the last leg. However, Jonny did pip Dirk at the Euro Tour last weekend, producing a ton plus average to do so. The big problem for Clayton is that even if he topples the giant, he’ll have to face van den Bergh or Chizzy in the next round. 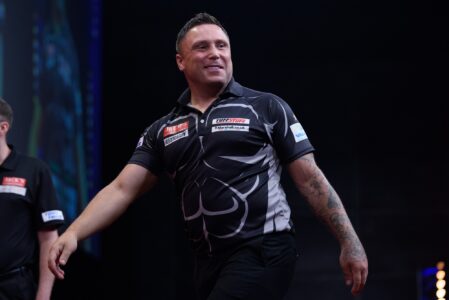 The Iceman in Hot Form

Gerwyn Price is the name on everyone’s lips at the moment. Three nine darters in the year already alongside a Matchplay Final and a World Series win. The only pressure really comes from the fact that he is defending £100k from when he beat Dirk in 2020, and Snakebite is eyeing up his World number 1 spot.

His great form will worry Martin Schindler, his first opponent. They met at the Matchplay and Gerwyn saw the German out in a tight affair. But Price has pedigree in this tournament, winning 9 of his last 10 games. His tops and tens are so strong and his confidence is at an all time high, even claiming he could be invincible soon.

The other members of ‘The Big 3’ have interesting draws themselves.

The 5 time champion Michael van Gerwen has drawn the old enemy, Gary Anderson. There is a possibility that Gary may play his last Grand Prix this year and he would just love to get one over on his Dutch rival. But it’s not likely given that Michael already has 2 majors to his name this year.

Snakebite has never really caught fire at this event. One final that he lost to MVG in 2018 and that is really all there is to report. He draws Kim Huybrechts who is getting somewhat back to form, but probably not enough to say he can rival Peter yet. Although the double start format, or a wild dart change from Wright, may give him that boost.