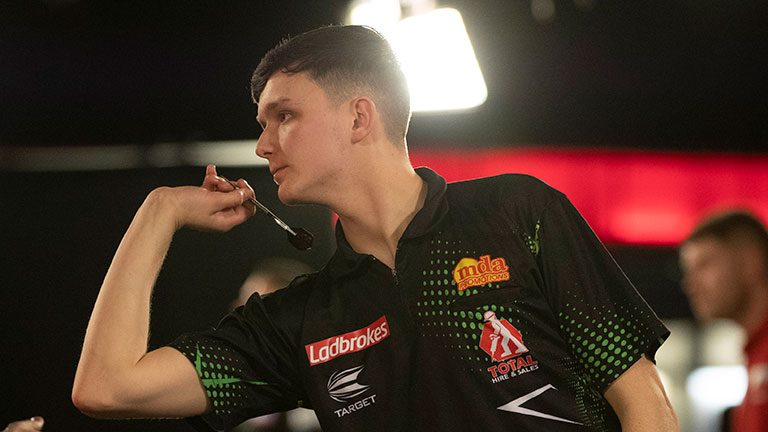 Day Three saw us complete groups A-D. Jonny Clayton, James Wade and Rob Cross were a few of the names who secured a place in the last 16 on Monday night in Wolverhampton.

Gerwyn Price had already secured his place in the last 16 but lost his final game of the group to Martin Schindler in the surprise score on Night Three.

Martin Schindler defeats Gerwyn Price 5-4. Price lead in 3-1 before Schindler fired in three straight legs. Martin Schindler missed a 160 to win it 5-3 however, he broke Price in leg 9 including a 180.

Nathan Rafferty joined Gerwyn Price in the last 16. The Polish Eagle was strong favourite coming into this one and after seven holds of throw Ratajski missed match darts before Rafferty holds for the decider.

Rafferty than had to watch more match darts for The Polish Eagle which were missed again to make it 6 before the youngster hits tops with his first match dart. What a week for the youngster

The opening game in this group saw the two youngsters meet with both having a chance of qualification. It was Bradley Brooks who booked his place in the last 16. He hit two ton plus checkouts to beat the young Austrian 5-3.

That meant Mervyn King needed to win 5-0/5-1 against Jonny Clayton to qualify. Jonny just needed the two legs to qualify and a win to finish top and avoid a clash Gerwyn Price.

Jonny Clayton joined Bradley Brooks in the last 16. Mervyn King came flying out the blocks on his throw to lead 2-1. He missed darts at tops to break and with Clayton taking out 32 it meant Mervyn King was out,

The next four legs went with throw and after King missed two match darts at 32, Clayton came back to secure the win and top spot.

First up Group C we saw Jim Williams reel off five straight legs to defeat Boris Krcmar 5-1. The Quiff’s doubling was sensational under pressure and knew then he just had to sit back and hope result went his way between Rob Cross and James Wade.

Jim needed either Wade to win 5-0 or Cross to win four legs.

Wade, Last years finalist, starts 121 on the bull and was leading 3-0. A handful of missed darts from Wade to break allowed Rob Cross four at a double, before taking out double three to book his place in the last 16. James Wade completed the win with Rob Cross just winning one more leg. James Wade fires in a 111 average in a game he needed to win.

Chris Dobey wins with a 5-3 win over Ryan Joyce. The fate of both players was decided before tonight’s action with Dobey already out of this year’s competition.

The final game of the night we saw the performance of the night from Rowby-John Rodriguez. Stephen Bunting got the first leg of the game and Rowby-John then reeled off the next five and averaged 104.82 to book his place in the last 16.

Last 16 ties confirmed from the top half of the draw.