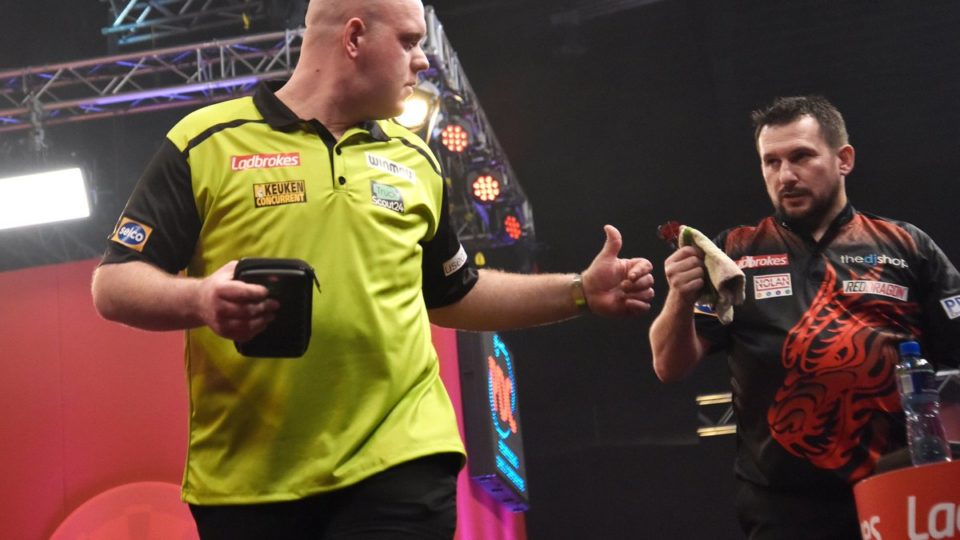 For the second straight year, The Ferret took out the five time winner of the event, beating the Green Machine 10-9.

Clayton will face James Wade in the quarter finals, who won 10-4 against Chris Dobey.

Elsewhere on day two of The Masters:

After his victory in Milton Keynes last January, Clayton showed that lightning can strike twice.

After holding in 20 darts, The Ferret fired out of the blocks for the rest of the opening session. Holding in 15, 15 and 13 saw him take a 4-1 lead, with van Gerwen averaging just below 85.

The Green Machine got going in the second session, as both players held throw twice in the second session. With Clayton 6-3 ahead, he left 106 to potentially go within three. However, MvG shut the door, pinging in a fantastic 158 to hold throw and remain one break behind at 6-4.

Clayton though continued to hold, and despite a 150 checkout from van Gerwen, was 9-6 ahead. After MvG held once more, the Welshman left himself 66 for the match to complete a 10-7 win, but van Gerwen would not go easily. He hit a brilliant 148 outshot, his third ton plus out of the match, to get the break back.

A further hold set up a last leg decider, and Clayton was spectacular, hitting two back to back 180s to start the leg. Despite not hitting the nine dart finish, he found double eight for a 14 darter to complete the win, ending van Gerwen’s hopes of a sixth Masters title in seven years.

Clayton will play James Wade in the last eight, as he comfortably beat Chris Dobey 10-4.

Three holds of throw saw Wade take an early 2-1 advantage, before Hollywood missed tops to level. The Machine punished, hitting double 16 to get the break and go 3-1 in front, with a 116 out seeing him extend his lead to 4-1 at the first interval.

Both missed darts for the sixth, before Dobey hit double five to cut the gap to 4-2. However, he then missed three opportunities to get the break back, as Wade eventually found double six to go three legs in front. Back to back 14 darters gave The Machine a 7-2 lead, but a 108 checkout from Hollywood kept him in the game at 7-3.

Wade though came out of the second interval and won three of the next four legs, eventually hitting the contest on double 10 to claim the victory.

Gerwyn Price produced the performance of day two at The Masters to beat Joe Cullen 10-3.

Price, who was introduced as the World Champion and world number one for the first time this evening, struggled to shake off The Rockstar to start with. Five straight holds of throw, including a 132 checkout for Price, saw The Iceman lead 3-2 after the first interval.

However, after the interval, Cullen missed double 11 for a 124 outshot. Price then punished him, finding double 16 to get the first break. That lit the blue touch paper for the Welshman, as three straight 11 darters saw him race into a 7-2 lead.

Despite Cullen hitting an 85 outshot to remain in the game at 7-3, Price finished the job straight after the second interval. He won another three straight legs in 49 darts, averaging 104.37 in the match, to move into the quarters.

The world number one faces Adrian Lewis tomorrow, who caused an upset in beating World Championship runner up Gary Anderson 10-8.

Lewis started off brightly, hitting back to back 15 darters to go 2-0 in front en route to leading 3-2 at the first interval. Jackpot then reeled off three straight legs when the match resumed, going 6-2 in front in 43 darts including a 127 checkout. The Flying Scotsman found double 16 to cut the deficit to 6-3, but a 112 checkout from Lewis saw him go 7-3 up at the final interval.

A 13 dart leg, before back to back 15 darters of his own, saw The Flying Scotsman win three straight legs and trail by one. Lewis held firm though, as three holds of throw took the match to 9-8, with Jackpot throwing for the match. Anderson, who’d survived match darts in the previous leg, then missed tops to force a decider. Jackpot then took out double 10 to get over the line.

Peter Wright got the defence of his title underway with a hard fought 10-8 win over Simon Whitlock.

Four holds of throw saw the match level at 2-2 early on, before Wright found a fantastic 10 dart leg in the fifth, hitting double eight to break and go 3-2 ahead at the first interval. That would be the crucial break of throw in the match, as five straight holds in the second session saw Snakebite lead 6-4 going into the second interval.

Despite averaging 105.9, and hitting six 180s, The Wizard could not get the break back. He missed darts to break the Wright throw in the 12th and 14th leg, before squandering two chances to send the match into a decider in the 18th leg. Wright eventually got over the line with a 64 outshot, making the last eight for the seventh straight year.

Chizzy started the brighter, taking 46 darts to go 3-0 ahead. However, a first hold, followed by a fantastic 146 to break the throw, saw Gurney reduce the deficit to 3-2 at the first interval.

Superchin levelled at the start of the next session, before Chisnall reeled off another three legs in 46 darts to go 6-3 ahead. Gurney remained just the one break behind though at the second interval, pinging a 104 outshot in to trail 6-4.

Two holds of throw followed at the start of the third, after which Gurney found a spectacular 170 Big Fish checkout to get the game back on throw at 7-6. Superchin then won two of the next three legs to get the match to 8-8, before two holds forced a sudden death shootout. Gurney hit a 137 to leave 24 after 12, but Chisnall, after hitting double seven rather than double 16, found double nine to clean up 74 and close it out.

A 117 outshot, followed by a 12 dart leg, gave The Austrian a good start. However, five missed darts from The Gentle allowed Aspinall to break straight back, before levelling at 2-2. Suljovic regained the lead with an outstanding 156 checkout, going ahead 3-2 at the first interval.

Ten reasonably comfortable holds saw The Gentle lead 8-7, before The Asp missed double five for a 130 outshot. Suljovic then found a 56 checkout to go within one of the match, but missed two to do so. Aspinall then hit double four to trail 9-8, before holding to force the decider.

Once again the Austrian had chances to win the match on his throw, and once again he missed them. Three squandered darts saw Aspinall find double ten, to go ahead for the only time in the match and make the last eight.

Aspinall will play the in form Mervyn King, who defeated Rob Cross 10-5 despite a slightly controversial finish.

Cross missed five darts at a double in the opening leg, and The King eventually punished, hitting double 10 for the early break. That seemed to settle the runner up at last year’s Players Championship Finals, who was sensational for the rest of the opening session. He reeled off four straight legs, including two ton plus outshots, to go 5-0 up at the first interval.

Voltage eventually got on the board in the sixth, but any hopes of a comeback were ended in the next leg, as a 130 finish on the bull from King saw him go 6-1 ahead. Back to back 13 darters gave The King an 8-1 advantage, before an 80 finish from Cross made it 8-2 at the final interval.

Three further holds saw King go within one of the match, before he missed three darts to win it 10-4. The former World Champion Cross stepped up and found double 16 to extend the game, but King believed that Voltage had stepped across the oche on the right hand side. Despite the pair engaging in a bit of debate, it did not affect the result. King cleaned up an 86 checkout in the next leg to earn his spot in the last eight.