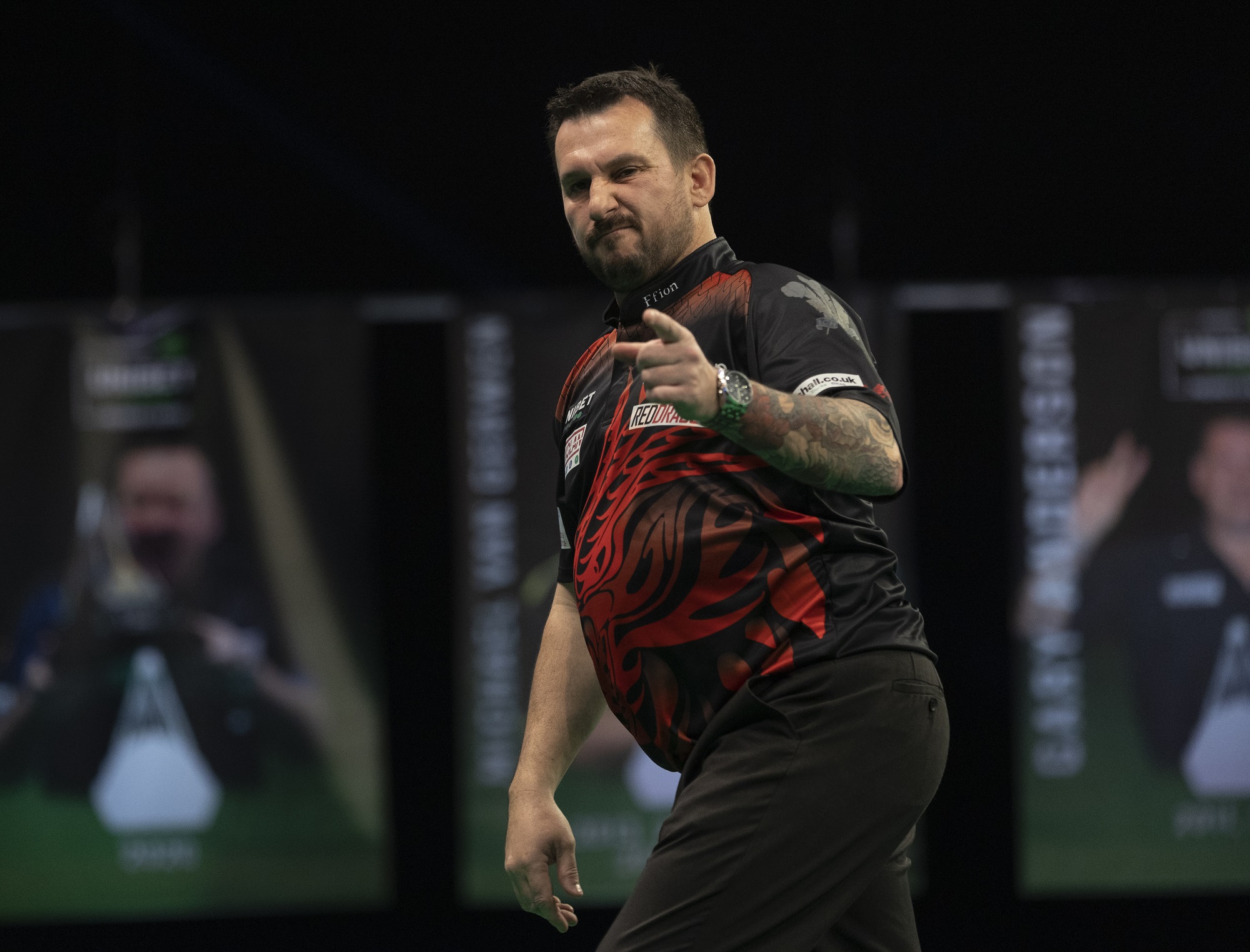 Jonny Clayton tops the table as the first week of the 2021 Premier League Darts comes to an end.

The Ferret averaged 99 in what was a mostly comfortable 7-4 win over The Flying Scotsman.

Clayton moves top of Premier League after cruising past Anderson

Jonny Clayton bounced back emphatically from his shock defeat to Rob Cross last night. He hit 6 maximums en route to a 7-4 win over Gary Anderson.

The Welshman made his mark early, pinning D10 to break in the opening leg. He doubled his lead with an 86 checkout in leg 2, and that set the course for the match.

The only blip for The Ferret was the eighth leg, where he missed 6 darts at D18 which allowed Anderson to break and level at 4-4.

Gary couldn’t build on that leg however, with too many stray darts stopping his rhythm. Clayton rolled off the final three legs and moved to 7 points, meaning he is all but safe from elimination from Premier League Darts.

Peter Wright came from 5-3 down to beat Rob Cross 7-5 in an epic comeback, using yet another set of darts.

Snakebite started the game poorly, allowing Voltage to break his throw in 21 darts in the opening leg. Cross was in fine form, and hit an unconventional 118 checkout on D11 to go 2-0 ahead.

Cross moved 3-1 up with a 102, his second ton-plus checkout. Wright then produced a double-double finish for 3-2, and then hit a 12 darter to break and level.

Rob was still the better player at that point, and broke for 4-3 before hitting an 11 darter to break for 5-3.

Leg 10 proved crucial however, as Cross missed two darts to guarantee a point and Wright punished to level at 5-5. The momentum shifted towards the Scot and he finished the game off and win 7-5 and averaging just over 100.

Nathan Aspinall averaged 105 in his 6-6 draw with Michael van Gerwen in a fantastic match.

The first three legs were all won with a ton plus checkout. Mighty Mike had first blood with a tops-tops finish on a 100 checkout. Aspinall replied with a 121 of his own to level 1-1.

The highest checkout of the match came from MVG in the third leg, as he pinned a 148 with Aspinall sat on D8. It was MVG that got the first break though, as he hit a 13 darter for a 4-2 lead.

This only fired up The Asp, who broke straight back with an 11 dart leg.

The match went on throw after that leg, but Michael did miss a dart at tops to win the match 7-5. Aspinall closed it out last dart in hand at tops, as both men sit on 6 points in the Premier League Darts table.

The match started sluggishly with three consecutive breaks of throw. All of the usual De Sousa trademarks were there as he miscounted in leg 4, but still managed to win it for a 3-1 lead.

Van den bergh missed a 132 after hitting two bulls in the following leg, but Jose produced a classy 106 to gain a double break.

The match finally got going at that point, with Dimitri going 7 perfect darts into leg 8. But Jose had the better start and that is what seen him through to his first win.

The two points sadly don’t move him above the relegation zone for now, but they could be vital come judgement night.

The reigning Premier League Darts champion started brightly. He missed a dart to break in the opener and despite losing 2-1, he was averaging 96.

He produced back to back legs to recover to 5-3 down. But he has six darts from 121 to break the game back on throw- and didn’t get a dart at the double.

Wade tidied it up for 7-3 and Duzza looks a certainty for elimination in a fortnight.