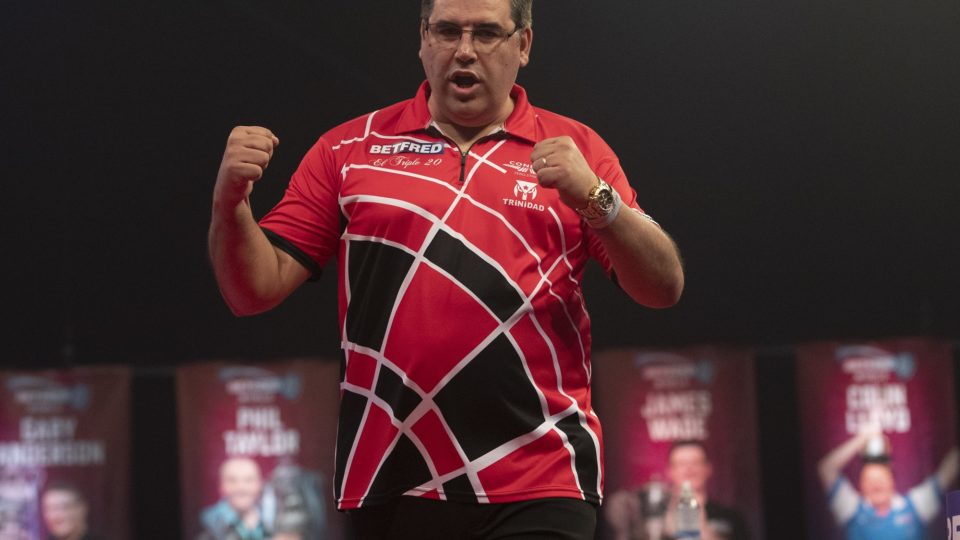 Jose De Sousa hit a nine darter, and equalled the most amount of 180s ever hit in a Premier League Darts game, but still could not find his first win in the event.

The Special One struck perfection in the second leg of his game against Nathan Aspinall, but had to settle for a point, as missed chances at double let him down.

On a remarkable night four of the 2021 Premier League Darts:

In what was a remarkable performance from De Sousa, his doubling ultimately cost him. He finished just 6/24 on the checkouts, allowing Aspinall to nick a point.

The first leg actually saw The Special One go back to back and leave 141, but a combination of five missed darts at double, plus hitting double top when he wanted double five, allowed Aspinall to pinch the first leg and break.

The second leg however, saw the history making moment. After being on the receiving end of a nine darter from Jonny Clayton last night, De Sousa produced it himself. He hit two straight 180s, followed by treble 20, treble 19, double 12, for his second nine darter in front of the big TV cameras.

What a start to this game, as Jose De Sousa hits his first nine dart leg in the #PremierLeagueDarts!

De Sousa then missed double top for a 120 outshot to go ahead, and Aspinall punished once again, hitting double 16 for a 14 dart break. Roles reversed in the next leg though, as The Asp missed two darts to go 3-1 ahead, and De Sousa pinged tops for a 13 dart break straight back.

Two holds of throw followed, before the Portuguese player found two back to back 13 darters to go 5-3 ahead. Aspinall did not let him get out of sight though, hitting double 11 to break back immediately, before capitalising on four missed darts at a double from De Sousa in leg 10 to level the contest back at 5-5.

De Sousa found two 180s in the penultimate leg to guarantee his point, equalling Gary Anderson’s record of the most ever 180s in a Premier League game with 11. However, he could not cap the performance off with a win, missing the bullseye for a 90 finish and the win. Aspinall came back for tops and hit it for a 16 darter, rescuing a point from a very special contest.

James Wade took advantage of poor doubling from Michael van Gerwen to beat The Green Machine 7-3, getting his win of the 2021 Premier League Darts season. It’s also the same scoreline that Wade beat MvG on night four of the 2019 season, the last time The Machine was in this event.

A 120 outshot from Wade in the opening leg set the tone, as he ended up 7/13 on the checkouts in the contest. Despite hitting tops for a 16 dart hold to level, MvG missed two darts to win each of the next three straight legs. Wade found double 10 in each of those legs to take a 4-1 lead, by which the damage was done.

Despite a lovely 110 checkout from MvG to make it 4-2 checkouts of 121 and 135 saw The Machine hold his throw twice, guaranteeing a point by going 6-3 up. In the 10th leg, Van Gerwen missed a shot at the bull for an 83, allowing Wade, who’d missed tops in his previous visit, another shot at it. This time, he did not miss, hitting double 20 to take the two points.

Rob Cross continues to find some form for the first time in over a year, beating Jonny Clayton 7-3.

Both held throw in the opening two legs, before Voltage found the first break of throw, cleaning up 25 for a 14 darter. Clayton had the chance to level immediately, but missed three for 24, allowing the former World Champion to hit double four to go 3-1 ahead.

Roles reversed however in the next two legs. After The Ferret cleaned up 25 himself to trail 3-2, he punished three missed darts from Cross at 40, to find double eight for another 25 outshot and level the contest at 3-3. Clayton though, who ended 3/16 on the doubles, missed three more to go into the lead. This allowed Voltage, who’d missed two himself in the previous visit, another shot at double eight. This time, he took it out, and went back ahead 4-3.

Clayton once more had a shot at the bull to level in the next leg, but missed it. Voltage punished again, hitting double 14 to go 5-3 up. Cross guaranteed a point in the next leg, hitting a lovely 89 checkout on double five, with The Ferret sat on double 16 to cut the gap to one. The final leg of the match saw Voltage miss double 19 for a 158, but when Clayton could not take out the 156, Cross took out the 38 on double 16 to secure the win.

Dimitri van den Bergh hit eight maximums, but could only get himself a point against his lockdown landlord Peter Wright.

After both held throw in the opening two legs, Van den Bergh moved into the ascendency. After holding once more with a 100 checkout, a fantastic 160 outshot saw him break the Wright throw and go 3-1 ahead.

Wright responded brilliantly though, finding a 121 outshot to get the break straight back. However, he then missed a bull to level the contest, as The Dream Maker hit double seven to restore the two leg lead at 4-2. However, roles reversed in the next leg, as the Belgian missed a dart at double 18 for a 5-2 lead. Wright then punished, hitting double eight to get the gap back to one.

Snakebite then levelled the match with a 13 dart hold on tops, before Van den Bergh went in front once more. Once again though, he missed chances to break, this time squandering three for 32. Wright came back for 60, and with the last dart in hand, found double 10 to keep the contest all square at 5-5.

Van den Bergh held in 14 darts to guarantee a point, but two 180s from Wright in the 12th leg ensured Snakebite would share the spoils, hitting 41 for a 12 dart hold to bring a fantastic game to an end. It does mean that Van den Bergh is the only undefeated player in this year’s Premier League Darts, topping the table after night four.

Anderson looked in complete control from the start of the game, hitting back to back 14 darters to hold twice and go 2-1 front. In the fourth leg, two 180s from The Flying Scotsman saw him on 58 after nine, and despite missing two at tops, he eventually found double 20 for a 13 darter and a 3-1 lead.

Another finish on tops, this time a 68 outshot, saw the two time Premier League champion move into a 4-1 lead, before missing double seven in the next leg to go a double break ahead. This allowed Durrant to find a stunning 108 checkout and decrease the gap to 4-2.

However, this did not deter The Flying Scotsman, who quickly raced across the finishing line. A third 14 darter, again finishing on tops, restored the three leg lead. He then capitalised on three missed darts at double from Durrant in the eighth leg, finding double six to guarantee a point. 17 darts later, once again hitting tops, the job was done, and two points were in the bag.

Rob Cross rants at Wayne Mardle " If Wayne wanted that much of an opinion tell him to pay my bills."

Can James Wade get his first win of the #PremierLeagueDarts season?

Or will Michael van Gerwen continue his excellent run of form and regain top spot?

Remarkable. You hit a 9️⃣ darter, equal the most amount of maximums in a #PremierLeagueDarts game ever (1️⃣1️⃣), and still don’t win.

Incredible from Jose De Sousa, but what courage from Nathan Aspinall!

The points are shared! #Darts

What a start to this game, as Jose De Sousa hits his first nine dart leg in the #PremierLeagueDarts!

He really is The Special One!