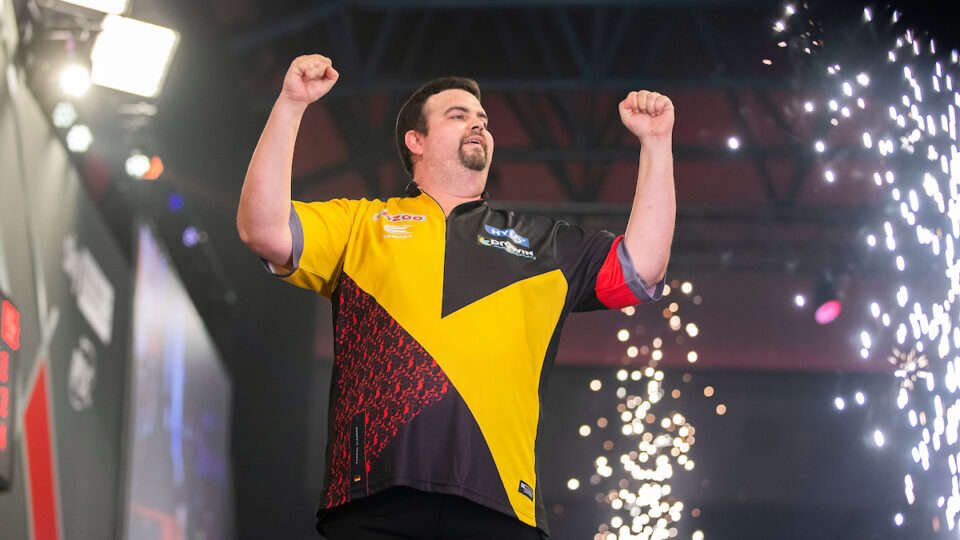 Gabriel Clemens produced the performance of his career to knock out Gerwyn Price at the quarter final stage of the PDC World Darts Championship.

The German Giant was excellent in both phases of the game, crushing the number one seed 5-1 to become the first German player to reach the semi finals of this tournament. The game was also noticeable for Price coming out wearing ear defenders during the game, to block out the largely German crowd.

There were no such problems for Michael van Gerwen, who defeated Chris Dobey 5-0 to move into the last four. He takes on Dimitri Van den Bergh, who won 5-3 against Jonny Clayton in the opening quarter final.

Germany has been a massive area of growth for the PDC and it is in full evidence in this tournament. Not only have 800 Germans been packed into the Ally Pally every night since 27 December, their number one player is now producing on the biggest stage.

Finishes of 140 and 110 helped The Iceman to a whitewash opening set, but a second set average of 103 got The German Giant level. He then broke in the third leg of the third set, before holding on double two to move 2-1 clear.

Clemens continued to produce in the fourth, finding a magical 136 outshot, before taking advantage of missed doubles from Price to winning the fourth on double 10. Amazingly, Price then came out at the start of the fifth with ear defenders on to try and block out the crowd. While it worked for the first leg of the set, it did not for the rest of it, as Gaga rattled off three straight legs to go within one.

The upset was complete in the sixth set, as Clemens whitewashed his opponent, hitting double four to move on.

The German Giant will play Michael Smith in the first semi final tomorrow, after Smith sealed his place in the last four with a hard fought victory over Stephen Bunting.

The Bully Boy won a deciding leg to take the opening set, but The Bullet responded with a whitewash in the second, levelling the game with an incredible 160 outshot.

In the third set, Bunting missed a chance to break, allowing Smith to hold, before breaking himself on double 18 to go in front. The Grand Slam champion broke in the third leg of the fourth with an 11 darter, before holding to increase his lead to 3-1.

A whitewash set for Smith moved him one away, but The Bullet would not lie down. He produced another whitewash set himself to move 4-2 down and broke in the third leg of the seventh. A 12 dart hold in the next leg cut the deficit to 4-3.

The Bullet then missed tops for another 160 at the start of the eighth set, allowing Smith to clean up 40 and break. Two holds later, The Bully Boy hit double 10 to complete the job and move into his second consecutive World Darts Championship semi final.

Michael van Gerwen had no such problems in the quarter finals, as he cruised to victory over Chris Dobey.

The pattern of the match began in the first set, with Dobey missing darts to force a deciding leg. After missing set darts in the previous visit, MvG took out double four to go one set ahead. The Green Machine then missed set darts in leg three of the second, allowing Dobey to pick up a second leg. It did not matter though, as the three time World Champion hit double 18 to double his advantage.

Van Gerwen once again took advantage of more missed shots at double from Hollywood in the third and fourth sets. Dobey had at least one dart to win four of the six legs in the two sets, but could not find them, ending the night just 3/14 on the outer ring. It allowed Mighty Mike back to back whitewash sets, to go within one of the match.

A magical 152 from MvG saw him go within a leg of the match and despite a break from Dobey in the third leg on 25, MvG hit double five to complete the whitewash in sets.

Van Gerwen will take on Dimitri Van den Bergh in the last four tomorrow, a rematch of their epic Betfred World Matchplay semi final from July.. The Dream Maker won the opening match of the day, beating Jonny Clayton 5-3.

Both traded whitewashes in the opening two sets, with Van den Bergh missing chances in the fourth leg of the third set to force a decider. It allowed The Ferret a poke at 25, which he took to go 2-1 in front. It was to be another whitewash for the Belgian though in the fourth set, levelling up the contest in 49 darts on double 10.

Two holds from each in the fifth forced a decider, where Clayton pinged double eight to retake the lead. Roles reversed in the sixth, as Van den Bergh hit double 16 in the deciding leg to equalise again at 3-3.

The decisive moment of the match came in the first leg of the seventh set. The Ferret missed five darts to hold, allowing Van den Bergh to eventually find double 10 and get a crucial break. Two holds later, The Dreammaker went 4-3 up and was throwing for the match.

Both held and then broke in the eighth, with Clayton missing four more darts to level the contest in the fourth leg and send it to a deciding set. In the fifth leg, Van den Bergh eventually hit double nine to get over the line, becoming the first Belgian to reach the PDC World Darts Championship semi finals.