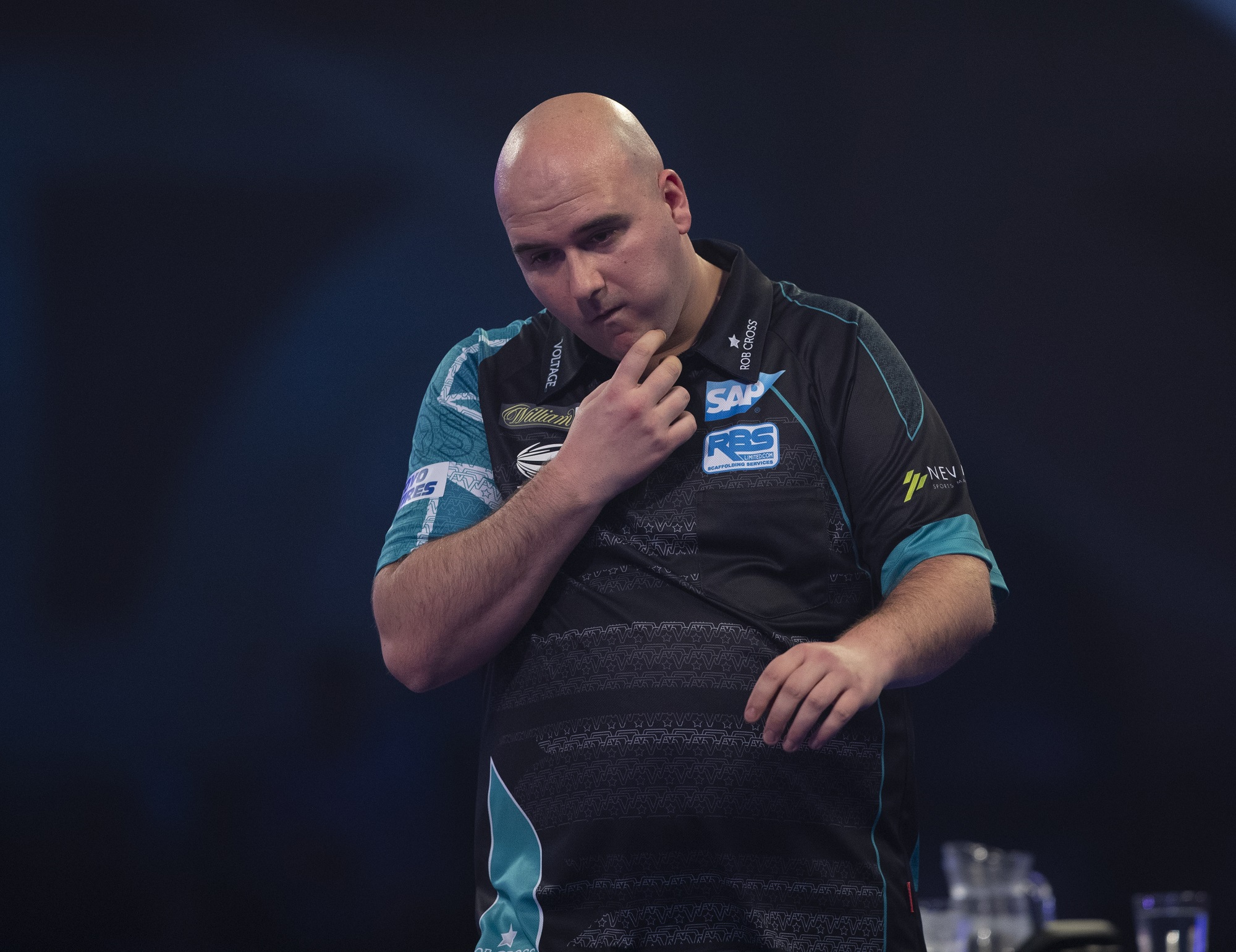 Rob Cross was the only seed to fall on day two of the Betfred World Matchplay.

Cross became the first defending champion to lose in the first round since 2006. He lost 10-8 to German debutant Gabriel Clemens.

Elsewhere on day two of the World Matchplay:

Gabriel Clemens caused the biggest upset of the week so far. He beat Rob Cross 10-8 in a very scrappy game.

The tone was set in the opening leg. Cross missed two darts for a hold of throw, and the German hit D18 for a 20 dart break. The opening session also saw 19 and 22 dart hold of throws, with Clemens taking a 3-2 lead at the first interval.

Cross then got the break back in the sixth leg, before Clemens snatched it back in the next one. The highlight of the match came in the eighth leg, as Clemens became the first man to hit a 170 outshot this week, extending his lead to 5-3. Cross held throw in the ninth leg, before finding a 11 dart break of throw to level it up at 5-5 after the second session.

Cross then took a 113 out to take a 6-5 lead, before Clemens missed a single 19, but still finished 72 on the bull to level up at 6-6. The crucial break came in the 13th leg. The Matchplay champion missed the bullseye for a 167, and Clemens cleaned up 55 to go ahead once more.

This sparked Clemens to produce his best scoring performance of the match, hitting 4 180s in five legs. The game got to 9-8 in favour of the German Giant, and Cross missed three darts to send it into extra time. Clemens then pinged D8 for the biggest win of his career, meaning Voltage became the first defending Matchplay champion to lose in the first round since Colin Lloyd in 2006.

Clemens spoke to Online Darts after his win, saying: “It’s amazing. He won the title last year, and has pressure on him this year.

“He plays not good, I play not good. It was not a good game. I’m the lucky man.”

Wright comes through a battle

Peter Wright nearly followed Cross out on day two of the World Matchplay. He needed a miraculous comeback to beat Jose De Sousa.

After exchanging breaks of throw in the first two legs, the Portuguese number one held his throw with a 161 checkout to take a 2-1 lead. Both then held their throws to make it 3-2 to De Sousa at the first break.

The Matchplay debutant punished the World Champion in the next leg. Wright bust his score on 76, and De Sousa found D5 with his last dart in hand to break the throw and took a 4-2 lead. He held onto that break of throw throughout the session, leading 6-4 at the second break.

De Sousa then moved into an 8-5 lead, after Wright missed D16 for a 106 out. Wright then removed his glasses and never looked back.

The first key moment came in the 15th leg. After holding his throw, Snakebite pinged a 144 checkout to get the break of throw back. He levelled up the match 8-8 in the next leg.

De Sousa then missed three darts to move into a 9-8 lead and hold his throw. Wright punished him on D16 to get the crucial break. In the final leg, The Portuguese had a chance to take it to extra time, but hit the single 1 instead of D20. The World Champion then hit tops himself to win five legs on the spin and complete the comeback.

A relieved Wright told Online Darts afterwards: “Jose is a brilliant player, but he didn’t play at the top of his game. I was playing myself, I wasn’t even playing him.

“At 8-5 I changed darts back to the floor tournament ones. I took my glasses off because I was fed up with the glare… I couldn’t see the board.”

Mensur Suljovic and Jamie Hughes kicked the night off with a Matchplay classic. The match saw 18 180s, both players average over 100, and an extra time finish.

After sharing the opening legs, Suljovic took a 4-1 lead heading into the first break, hitting a 101 checkout to do so. The pair hit six 180s in the first five legs.

Hughes then got the game back to 5-4 in the second session, before levelling it up at 5-5 with a 17 dart hold of throw when Suljovic missed darts for the leg. Both players were averaging 103 at this point, and had hit 5 180s each, and the quality did not stop there.

Yozza got a huge break of throw for a 7-6 lead, after the Austrian missed two darts to take the lead himself. It looked like that would be a winning one, as he led 9-8 and had the throw in the 18th leg.

Hughes then missed a bullseye for the match, before Suljovic cleaned up D8 to take us to extra time and 9-9. Both players then held their throw again to make it 10-10.

The crucial break came in the 21st leg. After Hughes missed two darts to break the throw again, Suljovic hit a magnificent 127 bull outshot to hold. This gave the Austrian massive confidence, and he punished a miss at D12 from Hughes in the next leg, hitting a 112 checkout to win one of the great first round Matchplay games.

Speaking after his dramatic win, Suljovic told Online Darts: “I never gave up. I focused on my game. At 9-9, I told myself, you’re not losing this game.

“Today, I thought I played good, but Jamie played brilliant.”

Glen Durrant made the second round on day two of the World Matchplay with a comprehensive victory over Jeffrey De Zwaan.

The three time BDO World Champion lost the opening leg, but won the next four, punishing missed darts from De Zwaan to get two breaks of throw in the first session.

De Zwaan got one break straight back after the interval to make it 4-2, but Duzza found a 11 dart leg to retake it. The Dutchman then missed bullseye for a 170 shot, leading Durrant to go 6-2 up. It was 7-3 after the second session.

The Teesider then cleaned up the remaining three legs, finishing the game with an 86 outshot on the bull. He beat the former Matchplay semi finalist 10-3, averaging 107.

An ecstatic Durrant said to Online Darts after his win: “I’ve sent out a statement to myself. I felt good up there.

Michael Smith had to wait until the final game of the night to get his campaign under way, but did not take long to beat Jonny Clayton 10-3.

In a game that mirrored their meeting in the Premier League earlier this year, Smith started tremendously. He punished Clayton’s missed doubles to go into the first interval 4-1 up, hitting a 103 in the process.

Those 8 missed darts at double for The Ferret would cost him. Bully Boy reeled off four straight legs after the interval, not giving his opponent a chance at a checkout. Smith closed the seventh leg out with 126 on the bull, as he went into the second break 8-2 up. At this stage, he was 8/11 on the doubles.

It took until the 11th leg for Clayton to hold his throw, after the St Helens man missed tops for 9-2. That would be the last leg the Welshman would win though, as Smith hit a 10 darter to go within a leg of the match. Last year’s finalist then hit D9 to beat Clayton, averaging 101 in the process.

Smith told Online Darts after his win: “The way I started off I thought I was garbage. I knew my doubles were good but my scoring was never there.

“[Wayne] Mardle said I’d lose because I was rubbish in the Summer Series. I was like I’ll show him.”