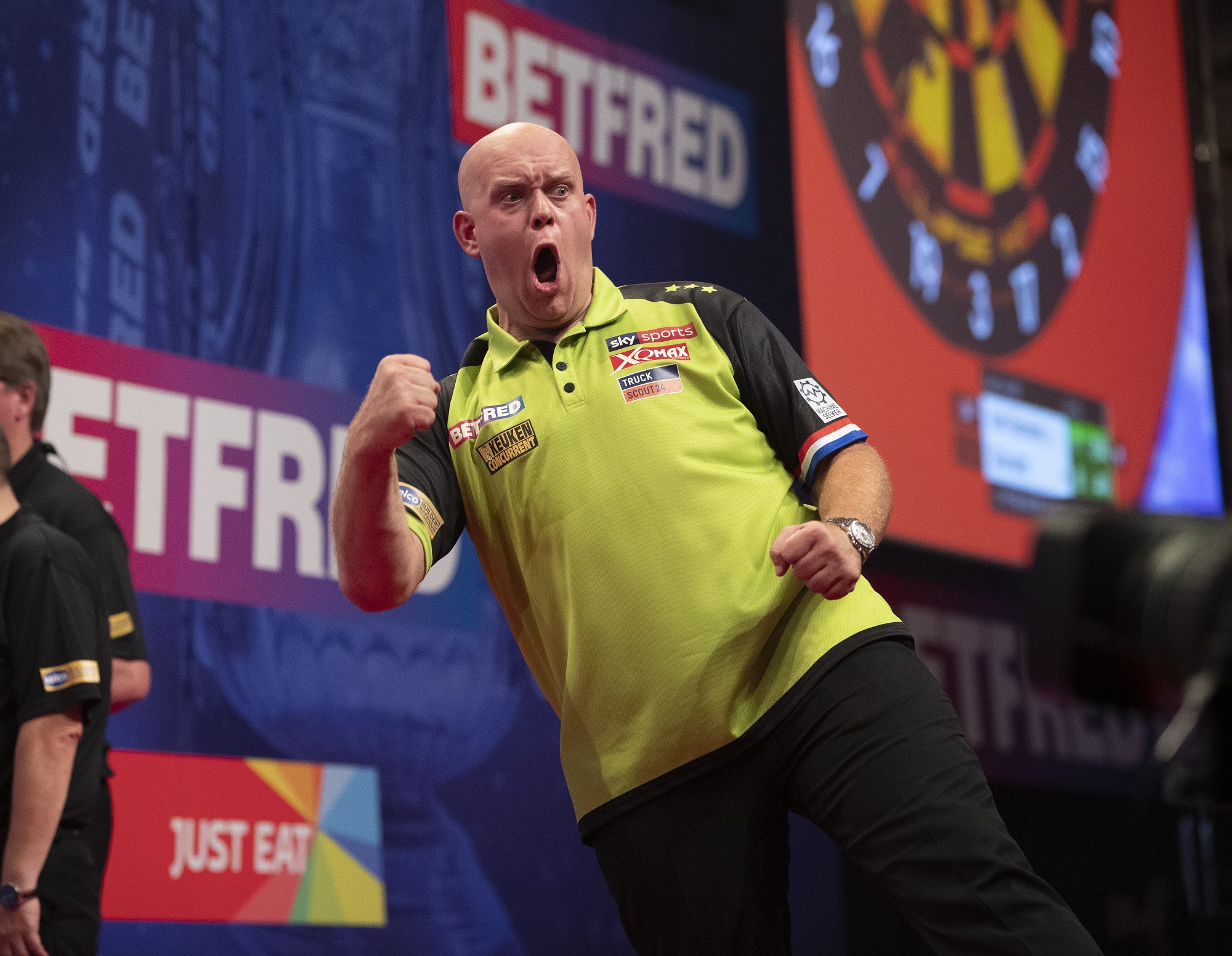 Michael van Gerwen came through a tough test on day one of the Betfred World Matchplay.

The world number one was far from his best, but still beat Brendan Dolan 10-7 to move into round 2 at the Marshall Arena in Milton Keynes.

He will play Simon Whitlock, who won the opening match of the tournament 10-4 against Ryan Joyce.

Elsewhere on day one of the World Matchplay:

van Gerwen made to work

It was an all but comfortable night for Michael van Gerwen in his round 1 game v Brendan Dolan.

After losing the opening leg, the world number one punished missed doubles from the Northern Irishman. Instead of potentially being 4-1 down, the Dutchman was 4-1 up heading into the first interval.

Dolan came fighting back after the interval, rounding off a 4-1 session win of his own with a 128 checkout. This meant it was level at 5-5 at the second interval.

MvG won the first two legs after the break, punishing a double 18 miss from Dolan in the process. The History Maker still wouldn’t go away though and hit D2 for a 17 dart break of his own, after MvG missed four darts for an 8-6 lead.

A frustrated van Gerwen told Online Darts afterwards: “One thing I was not planning to do was annoy myself over his game. He’s not the most pleasant player to play against. 95% of the field admit that to me.

On the lack of crowd, he explained: “It’s very new circumstances for everyone, and it’s difficult to handle. I’m still glad that I managed a 100 average nearly. I don’t know how!”

Anderson not at his best

Elsewhere on day one of the World Matchplay, it was a similar story for The Flying Scotsman Gary Anderson. He is defending £115,000 on his Order of Merit ranking this week after his win in the 2018 tournament.

He struggled in the early stages against Justin Pipe, and went into the first interval 3-2 down, after Pipe hit a 122 checkout on the bullseye.

Anderson immediately broke back after the restart, punishing Pipe for missing a double for 4-2. The fortunes reversed in the 10th leg however, as Anderson missed D20 for a 6-4 lead going into the second interval. Pipe then hit D18 to level up the game at 5-5.

The game then changed in the 12th leg. After The Force missed three at D16 for a level game, Anderson hit a 120 outshot to take a 7-5 lead. The back to back World Champion then won the last three legs to move into round 2, finishing the night with a 112 checkout.

Anderson found it difficult to adapt to the lack of crowd in the arena. He told Online Darts: “It was weird. Trying to play with nobody in front of you shouting, scoring wise, was definitely different.”

Wade has to wait until extra time

Anderson’s opponent in round 2 will be James Wade. Just like 12 months ago, the former Matchplay champion won his first round game in extra legs. He beat Keegan Brown 12-10 in a topsy-turvy affair.

Wade stormed out of the blocks, hitting four doubles out of four to take a 4-0 lead with an average of 113. Brown then reeled off five legs of his own to get lead the contest, before Wade levelled it up at 5-5 going into the second interval.

The two players kept holding throw until the 15th leg. Brown missed two darts to win it, leading the former Matchplay champion to ping a 107 checkout to go 8-7 up with a break.

The Isle of Wight man did not go quietly though. After Wade had missed D14 to win the match 10-7, Brown hit D10 to hold throw and make it 9-8. Then, he scored superbly in the 18th leg, eventually taking out 97 to make it 9-9 and sending it into a tiebreak.

The matched turned in the 21st leg. Brown missed a single 20 to give him a shot at D16 and to hold throw. Wade then hit 67 to get the break of throw and lead 11-10. The Machine then hit D18 in the following leg to come through a fantastic game against Brown 12-10.

After his victory, Wade told Online Darts: “It should have been over and done with a lot quicker. But, Keegan showed some brass balls there to be fair. He played well at times when I didn’t need him to.

“My experience got me a little bit excited and I made it a long haul, but I don’t fear anyone.”

Krzysztof Ratajski hit a 107.5 average on day one of the World Matchplay to book his place in the second round. He won 10-4 against Jermaine Wattimena.

Wattimena set the tone for the match early on, taking out a 118 outshot to break the throw in the opening leg. The Polish Eagle roared back though, taking a 132 out to level the match. He then won the remaining three legs of the session to take a 4-1 lead.

Machine Gun came back strong after the break. He took out a 95 shot with two Double 19s, followed by a 120 out to get back to 4-3. Ratajski pressed the accelerator again though, taking a 102 out en route to winning the three remaining legs of the session.

Trailing 7-3 to a man averaging 110 meant it would be difficult for Wattimena to get back into the game. The first two legs of the next session went with throw, before Ratajski hit a 118 checkout to take a 9-4 win. The Polish number one hit D16 for an 11 dart break to close out the victory.

“I am over the moon,” Ratajski told Online Darts after his win. “It was a great match for me.

“In the break, I practised a lot more than normally. I was training seven days a week. The Summer Series helped me prepare for this tournament.”

The opening session saw the pair hit six maximums, with The Wizard going 3-0 up after a 21 dart hold of throw. Joyce then hit a 108 checkout to get himself on the board, and then D8 in the next leg to trail 3-2.

Whitlock then did the damage in the second session. He got the break straight back after the interval, and then punished Joyce for missing a 118 out in the next leg to take a 5-2 lead. He then won another two straight legs, before Joyce stopped the rot to make it 7-3.

After the first two legs were held on throw, Joyce then had a chance to make it 8-5 but missed D16. Whitlock once again punished the debutant, then won the next leg to take a comfortable win.

Speaking after his win, Whitlock told Online Darts: “I’m really happy with that. Ryan’s just come off a big win in the Summer Series, and he’s a class player. We’ve had some ding dong battles over the last couple of years, and it’s good to get one over him.”

Looking ahead to his round 2 match against Michael van Gerwen, the Wizard said: “if I throw what I throw on the weekend, 100+ averages, I know I’ll give him a game.

“I’m not scared of Michael. I know he’s the best player on the planet, but I’ll just play my game.”