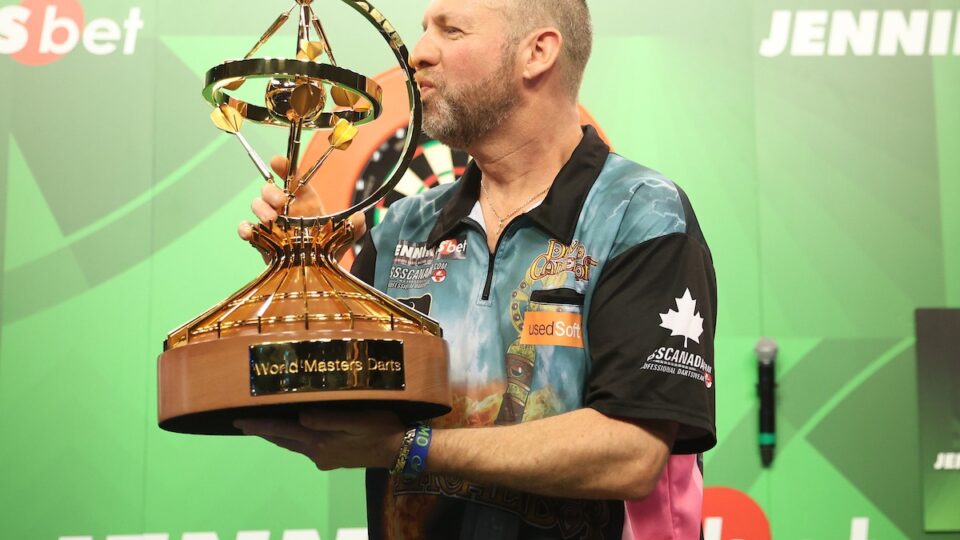 From Qualifier To Masters Champion

No nerves showing from either player in the opener as they both fired in 180s but it was Taylor who found an 87 checkout to win the first set after Cameron missed the opportunity to win it.

Reverse roles in set two, with Taylor getting the early break he had the chance to win both leg two and leg and leg three until Cameron got over the line with a 60 finish.

After the interval, David Cameron won set three with an early break and a hold, with Phil Taylor doing the same to Cameron in the fourth which included a 100 checkout from The Power with two double tops.

Set five Cameron found two breaks either side of a 116 checkout from Taylor to lead 3-2 at the break, with Taylor missing a set dart at the end of an attempted 120 checkout.

David Cameron found an extra gear after the break and extended his lead by three sets, after winning four out of the next five to move one away from the title.

The eighth set started with Cameron winning the first leg, meaning he was one away from the title, however, Taylor hit straight back winning leg two with ease, before punishing Cameron who didn’t get a match dart with 81 left with three darts in hand.

When the momentum looked like it was with Taylor he missed a handful of darts on throw to take the opener in the ninth with Cameron then taking out 96 to win the title.

Cameron Wins the Semi-Final of Qualifiers

The Canadian took a 2-0 lead into the first interval after winning both sets in the deciding leg.

The Owl got closed the deficit to just one after punishing Cameron’s missed set darts. Cameron didn’t let this hold him back and won the next two sets 2-1 and giving him a 4-1 lead.

Once more Howson came out after the break and punished missed darts by Cameron, this time they were for the game.

No set in this game had been won 2-0 and the final set of the game was no different with Cameron securing his place in the final and throwing the best average of the tournament  (93.14) in doing so.

Before defeating Cameron in the final, Silverback was his opponent and The Power raced into a 2-0 lead winning the last leg in both sets.

Taylor then went into cruise control for the next two sets, winning them both 2-0 and keeping the average over 90.

The Power gave himself the opportunity of the whitewash in the fifth, however, after missing match darts, O’Shea cleaned up 56 to make it 4-1.

Phil Taylor wasn’t going to miss that chance the second time around and cleaned up the sixth set 2-0 to book his place in the final.

Phil Taylor survived a fantastic comeback from Les Wallace to book his place in the last four.

It all looked plain sailing for Phil Taylor who raced into a 3-0 lead. Taylor was showing some sublime finishing which included a fantastic 144.

It looked like Phil Taylor was ready to head back to his hotel room and relax ready for the evening’s play, but McDanger had other ideas winning six out of eight legs to level the tie-up at three sets all.

The Power then rolled back the years, to hold with a 16 darter before winning with a 12 dart leg.

This set up a tie with the winner of Tony O’Shea or Martin Adams.

These two legends have gone head to head plenty of times previously, including a couple of occasions on the Lakeside stage. At the break, we were all square at one each with both players winning a set 2-0.

O’Shea stepped on the gas after the break winning six out of seven legs, including two 15 darters to open up sets four and five to secure a place in the last four.

David Cameron opened up proceedings on Sunday afternoon with a 4-2 win over Colin Monk.

The opening three sets in this game went with throw which meant the Canadian had opened up a 2-1 lead over Monk.

The fourth set was crucial, with the scores level Colin Monk struggled to find any scoring and it was Cameron who took a 19 dart leg to take a two-set cushion.

Colin Monk won the next two-nil, however, it was a little too late and the David Cameron run continued.

With one qualifier into the Semi-Finals, it was Howson’s turn to make sure a qualifier would be competing in the World Senior Masters final.

Keith Deller raced into a 1-0 lead with back-to-back 18 darters. The Owl then took control winning the next three to move just a set away.

Howson had five match darts to win the game 4-1, but once missed Deller punished The Owl, to close the gap to just one.

Once more on the Lakeside stage, the damage had been done earlier on, and it was Howson to play Cameron.