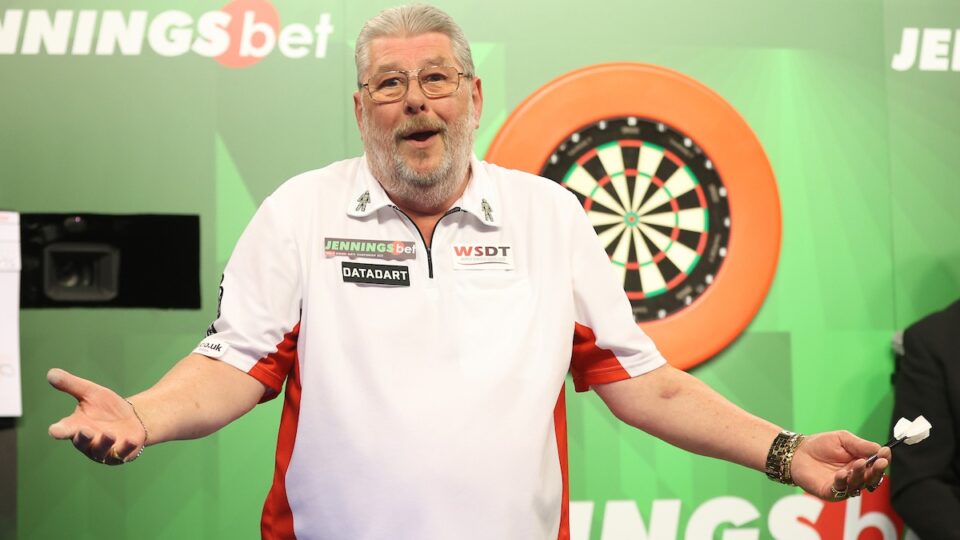 Martin Adams rolled back the years to come back from 2-0 behind to defeat Wayne Jones.

Martin Adams comes back from 2-0 behind to defeat Wayne Jones in the last game of the afternoon session.

Wayne Jones flew out the blocks with a 180 in the opener, before punishing Wolfie’s missed darts in the second leg to win the set. The Wanderer made it four legs out of four before the interval to double his lead.

The turning point in the game came in the third set, with the scores at one each, Wayne Jones missed a hatful of set darts before Adams won the set.

You could see the impact it had on Jones in the fourth and with 180s in both legs for Wolfie he eased to his second set and levelled up the game.

Martin Adams took an early lead in the fifth, making it five legs on the spin. Jones soon levelled up the set before, but it was the last leg Jones won, meaning Adams won eight of the last nine legs to seal the victory.

Monk Too Hot For Deta

For the first time this weekend, we saw a player pick up all eight legs to seal the victory.

Deta who lost in the first round at the World Championship to Peter Manley was unable to find the sort of form that has seen her become the most decorated player in the Women’s game.

Colin Monk will be returning on Sunday afternoon to take on the very impressive David Cameron.

Richie Howson treated the Lakeside crowd to a sensational performance in a 4-1 win over Terry Jenkins.

The Owl got the crowd onside in leg one, with a 160 finish and he secured the set with a 86 to show Bully that he meant business.

Jenkins showed his finishing qualities at the start of the second with a 100 checkout. However, it was Howson who took the lead going into the break with back-to-back legs.

Howson continued to push on with some power scoring in set three, to move just one away. Jenkins gave his fans something to cheer about in set four but it wasn’t enough to stop the OWL who eased to the fifth set and the game.

Silverback Into The Last Eight

Tony O’Shea rolled back the years to defeat Lisa Ashton 4-2.

Silverback returned to Lakeside and opened up on Saturday afternoon against four-time World Champion Lisa Ashton.

O’Shea looked the more comfortable in the early proceedings with a 2-0 win in set one.

Ashton came fighting back in set two and a double-double finish to checkout 92 saw the Lancashire Rose level the set scores up at one each.

Silverback then punished missed leg darts from Lisa in the opener after the interval, before firing in a 110 checkout to seal set three.

Ashton showed her quality in the fourth set, with it going to the third leg, Lisa fired in a 14 dart leg including a 180 and 81 checkout to level once more.

Silverback used all his experience to make sure he was returning on Sunday, winning four out of the next five legs, all within 17 darts.

Both players started the game strongly on throw, and with six straight holds, we saw the game level at the interval.

The run of holds stopped in the third set, with Cameron breaking in 18 darts before holding to take the lead for the first time. It was a run of five straight legs that saw David Cameron move just one set away from the victory.

In the fifth set against the throw, David Cameron created an opportunity to seal the win, however, he wasn’t able to convert two darts at double 16 for the victory and Thornton took the fifth set.

The drama continued in the sixth set, after back-to-back holds, it was Thornton’s turn to miss darts, and it was four to level the game up. David Cameron wasn’t going to allow another chance to go and he hit double 16 to seal a famous win.

Howson made it a dream day at Lakeside

Richie Howson making his debut on the Lakeside stage made two wins out of two with a win over Trina Gulliver.

Similar to his first game The Owl came flying out the block against Gulliver and took a 2-0 lead going into the interval and delighted his crowd with a couple of 180s.

After the break, Trina took the opener and missed a couple of darts to take the third set. The Owl punished those missed darts with an outstanding 160 finish. The power scoring of Howson and an 83 checkout proved too much in the deciding leg for Gulliver.

The six-time World Masters champion did get a set on the board in the fourth, however, it was a little too late and Howson sealed the win in the next set.

Keith Deller defeats Bob Anderson 4-1 to set up a tie with Richie Howson.

It was a slow start from both players and after two holds, it was Deller who got the first break of throw and the opening set.

Mr 138 then reeled off four more straight legs to move just one away from victory against Bob Anderson.

Bob Anderson was determined to make sure he got a set on the board and with an early break in the fourth, he held comfortably in the next leg to close the deficit and try and reignite his chances of victory.

Deller celebrated every checkout on the Lakeside stage and sealed the victory with his best leg of the game and he will be back tomorrow to face The Owl at the World Seniors Masters.

Wallace too much for Lowe

Les Wallace opened up the evening session with a 4-1 win over John Lowe.

Before the darts got underway on Saturday evening, the bagpipe was out and we saw an iconic walk-on for McDanger at Lakeside.

Wallace the 1998 Masters Champion, started off his challenge to be the Seniors champion winning the first four legs against Lowe.

The Lakeside crowd showed their support for Old Stoneface and he repaid them by winning his first leg of the game to open up the third set on madhouse, before winning the set in the deciding leg of this set.

Les Wallace stepped it up again in the fourth and fifth winning four out of the remaining five legs to set up a tungsten clash with Phil Taylor on Sunday afternoon.

First Round games unless specified