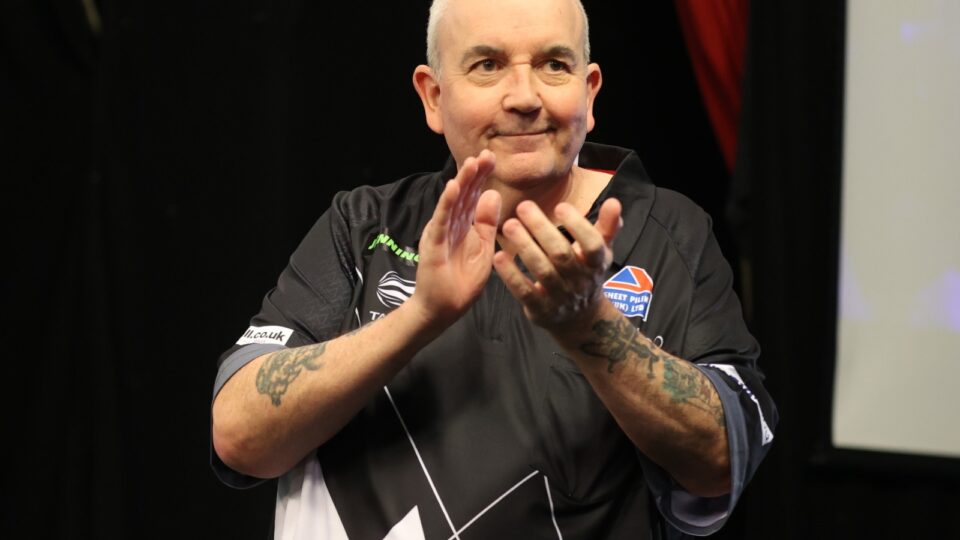 Phil Taylor gave the fans what they wanted with an impressive win over John Part to close the opening night at Lakeside.

Also on night one, we saw David Cameron shock Kevin Painter in a comeback win.

Phil Taylor returned to a Seniors stage with an impressive win over John Part.

As always the walk-on got everyone in Lakeside off their seats and Phil wanted to put on a show which he duly obliged. The Power went in at the interval winning all four legs to take the opening two sets.

Darth Maple did finally take a leg in the third set, however, it wasn’t enough for The Power to move just one set away.

Phil Taylor then completed another whitewash to win eight out of nine legs in the game and he will return on Sunday afternoon.

The Power will find out his opponent tomorrow and it will be either Les Wallace or John Lowe.

John Part set up the tie with Phil Taylor with a 164 checkout to complete a 4-0 win against Paul Lim.

The Singapore Slinger struggled throughout and was only able to win two legs against John Part who stormed into the last 16.

John Part completed the win in style with a 164 checkout and one of the moments of the night.

David Cameron returned to the Lakeside stage to defeat one of the tournament favourites 4-3 on night one at Lakeside.

In a match that was full quality, it was Painter who started the stronger and fired in a 151 checkout to win the opening set.

The Canadian fired straight back and levelled the scores at 1-1 going into the interval. After the break, it was Kevin Painter who put his foot on the gas and held throw with ease to take the third set which included another ton-plus checkout, this time a 110.

Kevin Painter continued to impress on the big stage and moved just one set away from the victory, however, the qualifier wasn’t giving up without a fight.

David Cameron was playing at Lakeside just over a month ago and even got an Uber from the Lakeside to make it to Reading for the Qualifier, and that dedication started to pay off as he broke The Artist before taking the game to a decider.

Cameron had the throw in the deciding set and opened up with a 17-dart leg. The Canadian then secured a famous win at Lakeside with a 14 darter, to set up a Saturday night tie with Robert Thornton.

Wayne Jones made it two out of two for qualifiers after defeating Roland Scholten 4-1.

The victory for The Wanderer means he will take on Seniors World Championship finalist on Saturday evening.

Wayne Jones did take the first set before Scholten made sure we were going into the break all square.