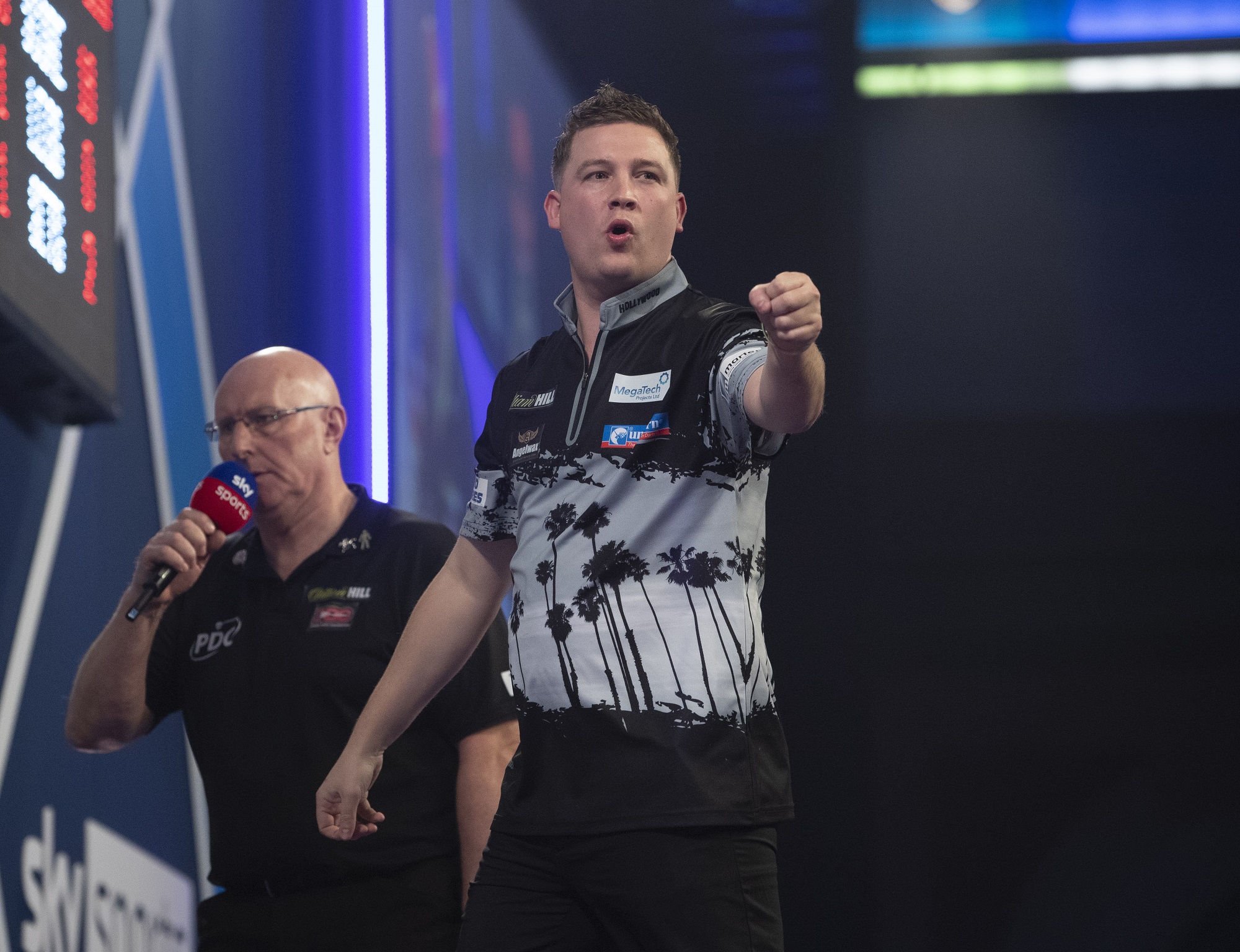 Chris Dobey produced a stunning comeback to see off Jeff Smith on day two of the World Darts Championship.

Hollywood was 2-0 down and one leg away from exiting the tournament at the last 64 stage. However, he turned the match to win 3-2 and move into the last 32 for the third straight year.

Delight for Dobey and Durrant

When the draw was made for this event, Chris Dobey was viewed by many as a seed in danger. Today, he showed all the heart he has to stay alive in the World Darts Championship.

His opponent Jeff Smith took advantage of missed doubles in the first two sets, taking a 2-0 lead and piling on more misery for the man from the North East. Dobey, who’s had a rough end to the season, was in danger of finishing it with a whimper.

However, the match changed at 2-2 in the third set. Hollywood found a 116 finish to get a set on the board, and a 106 finish helped win him the fourth set to level at 2-2.

Dobey then saved his best for last. A 130 finish on the bull, followed by a 12 and 14 darter, saw him take the final set in just 41 darts to complete the fightback. He faces Daryl Gurney or William O’Connor next up.

Things were easier for Premier League Champion Durrant. He beat Diogo Portela 3-0 with a gritty performance, with the Brazilian just 2/11 on the checkouts.

Still recovering from COVID-19, Duzza produced a 20 dart leg to hold in the opening leg. However, he would grow into the first set, finding an 18 and 14 darter to take it 1-0.

Duzza continued to struggle in the second set. An 18 darter, followed by a 23 dart leg, saw him take a 2-0 lead. He then found another 14 darter to win the set 3-0 once again.

Portela, who looked far more happier on stage after his win over Steve Beaton last night, finally got a leg on the board in the third set by breaking the Durrant throw. Both players broke each other’s throw twice to set up a deciding leg, where Duzza found yet another 14 darter to take the set and win the match 3-0. He will now face either Adrian Lewis, Damon Heta or Danny Baggish in round three after Christmas.

Hunt holds on against Ashton as Joyce survives Sedlacek

In arguably the game of the tournament so far, Adam Hunt managed to hold on to beat four time Women’s Champion Lisa Ashton 3-2.

Ashton, making her second appearance at the Palace in three years, started brightly, winning a high quality first set with a 70 checkout on the bull. Hunt then levelled with a whitewash second set, before both each held throw in the third and fourth.

With the score at two sets all, the match headed into a fifth and deciding set. There, The Lancashire Rose missed chances to break The Hunter’s throw, as he capitalised on her mistakes to take a 2-1 lead. Ashton then missed three more darts to take the match into a deciding leg, and Hunt ended the game with a fantastic 120 outshot. He faces Jamie Hughes in round two.

Ryan Joyce survived five match darts in the opening game of the day. He also came through 3-2 against Karel Sedlacek.

In a game of attrition, both players could not hold throw in sets where they had the darts. Sedlacek won the first set with a lovely 111 checkout, before Joyce levelled with an 89 shot for a whitewash second.

Evil Charlie then responded in kind, whitewashing Joyce to take a 2-1 lead. Relentless lived up to his moniker though, finding double four to take the fourth set 3-1 and force a decider.

Sedlacek went 2-0 up in the final set, before missing the first of six match darts to wrap it up 3-0. Joyce held, before breaking on double nine to force a deciding leg.

There, both players felt the pressure of it. Joyce busted a 106 finish, before Sedlacek missed another four darts to get over the line. Joyce then found double seven to bring the curtain down on a dramatic affair, winning the set and the match 3-2. He will take on Krzysztof Ratajski on Monday evening.

What else happened on day two of the World Darts Championship?

William O’Connor was hardly tested in his first round game against Neils Zonneveld. The Magpie was in control throughout, as the young Dutchman won just three legs all match. O’Connor found double 16 to take the 3-0 win, and set up a showdown with Daryl Gurney tomorrow.

Ross Smith was pushed harder by Challenge Tour David Evans in the afternoon. Both players hit four 180s, but Evans ended up just 5/21 on the checkouts. This allowed Smudge to win the match 3-0 despite some good stuff from Evans, who will be a danger on the Pro Tour next year. Smith faces Jose De Sousa tomorrow evening.

Max Hopp also saw off his first round opponent Gordon Mathers with a 3-0 win. The Maximiser hit four maximums en route to victory, made easier by Mathers going 3/13 on the doubles. Despite 120 and 139 checkouts, the Australian could not get going, meaning Hopp faces Mervyn King on Saturday afternoon.

Callan Rydz comfortably beat another Australian in the shape of James Bailey 3-1. The Riot won the first set 3-0, before Bailey produced two ton plus checkouts to respond with a whitewash set of his own.

However, after the second interval, Bailey would only win one more leg. The Aussie ended up 4/16 on the outer ring, as Rydz strolled to a second round meeting against James Wade on Friday evening.