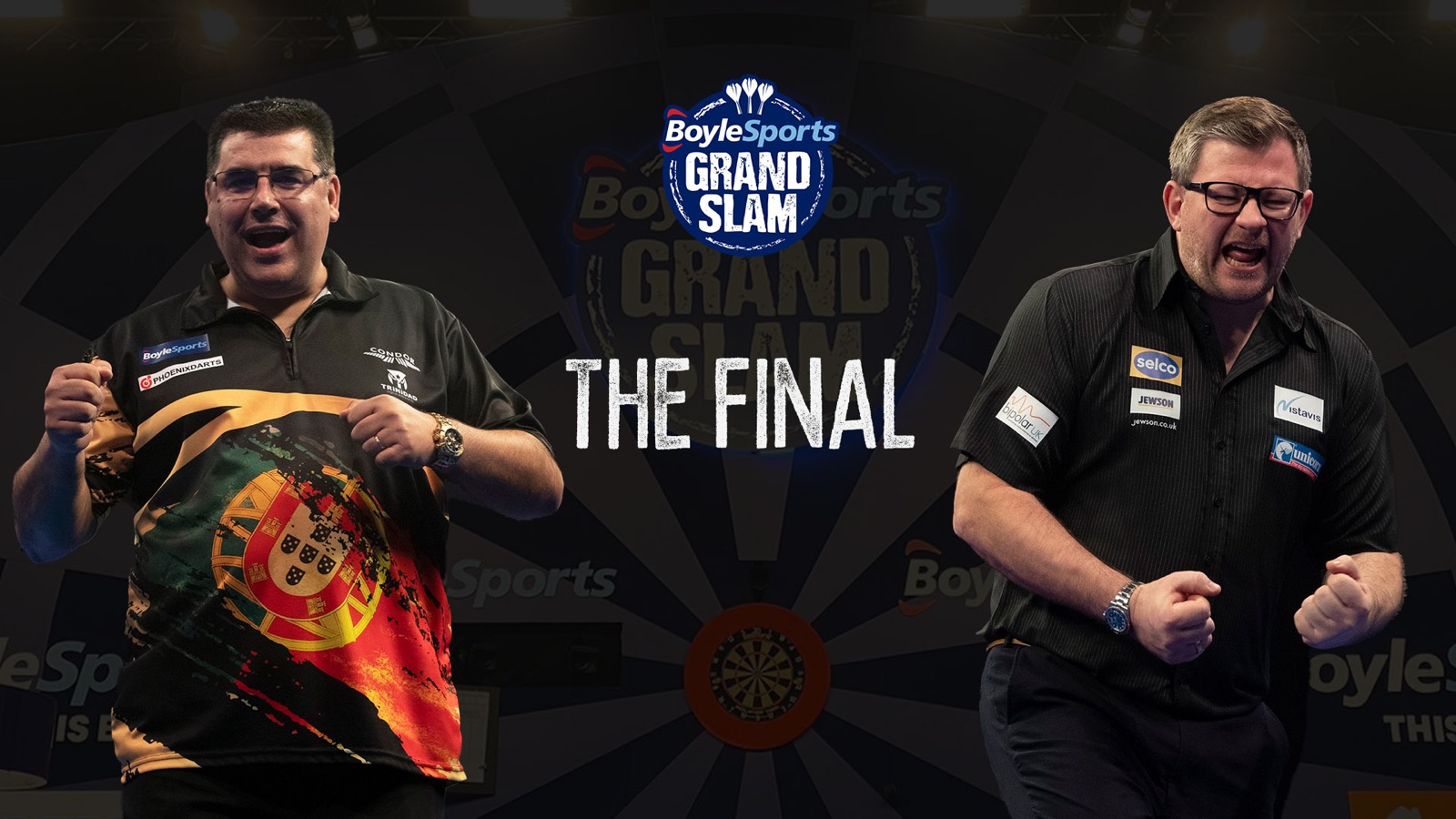 De Sousa is the first player from Portugal to be in a televised PDC final. He won 16-12 against Simon Whitlock.

The final takes place on Tuesday 24 November at 18.00 GMT. There are the first two players to qualify for next year’s event as well.

James Wade fought back from 13-9 down to make his third Grand Slam final. He beat Dimitri Van den Bergh 16-15 in another Grand Slam classic.

The Machine handed Van den Bergh the initiative in the opening five legs, as could not find his range on the outer ring. First, he missed tops for a 76 checkout, and The Dream Maker punished him, hitting a magical 160 outshot to break in the opening leg. Wade then missed another eight darts during the first session, having chances to win every leg. However, those misses would be costly, as Van den Bergh took a 4-1 lead away with a double break at the first intermission.

A further five holds in the second session saw the Matchplay champion have a 7-3 lead after two sessions, and both held their throw in the third session leaving the score 9-6 to Van den Bergh.

Wade though, finally broke the Van den Bergh throw. With the score at 10-7, he produced an excellent 14 dart leg, hitting tops to move two behind. However, he could not level the contest, as Van den Bergh held throw on double four to take a 11-9 lead at the final intermission.

Van den Bergh reeled off another two legs in 29 darts, before he missed a dart to take a 14-9 lead. Wade then found tops to hold, and it seemed to spark him into life. The Machine then won five of the next six legs, capitalising on six missed darts from The Dream Maker in the 28th leg, to level at 14-14.

The Belgian then found a fantastic 14 darter to break back, but missed bullseye to wrap it up with an 89 shot. Wade then hit double six to send us into a decider, and with the darts, left 76 after nine. The Machine then found double four for a brilliant 12 darter, to complete an improbable comeback. It was the only time the man from Aldershot ever took the lead in the contest.

Jose De Sousa won the opening Grand Slam of Darts semi final 16-12 against Simon Whitlock. It’s the first time ever that a Portuguese player has reached a televised final in the PDC.

The Wizard started the brighter of the two players. He broke in the opening leg, after De Sousa missed bull for a 167, before holding to go 2-0 ahead. With the match then at 4-2, the Australian broke the Special One’s throw once more, hitting an 89 shot to go 5-2 up. De Sousa would break straight back though, throwing seven perfect darts before settling for an 11 dart break, as two more holds saw the match reach 6-4.

The Special One then turned the match around. Four straight legs, including back to back 18 darters, saw him take an 8-6 lead. However, Whitlock would find two straight legs to level at 8-8.The Portuguese number one then miscounted in the next leg, as he bust 126 by scoring 136. He somehow still won the leg though, eventually finding double 16 to 9-8 up.

Two breaks of throw followed, before Whitlock had a bounce out in the 20th leg on 76. This allowed De Sousa a chance at a 121 checkout, which he hit for the first ton plus finish of the match and an 11-9 lead.

Two checkouts of 99, followed by a second 121, helped De Sousa move 14-11 in front, before punishing five missed darts from Whitlock to go within one of the match. However, he himself would miss five match darts in the next leg, allowing the Australian to stay in the match at 15-12. However, De Sousa would find double 16 after a brilliant 171 set up, to clinch victory and reach his first ever PDC TV final.

How can I follow the Grand Slam of Darts Final?

The BoyleSports Grand Slam of Darts Final will be live on Sky Sports in the UK. You can also watch it outside the UK via the PDC’s broadcast partners, such as RTL or DAZN.

You can also live stream the final. Find out more here.

We’ll have you covered here at Online Darts, with reaction with the winner direct from Coventry. Head over to our YouTube channel and hit subscribe so you do not miss it. We’ll also have the final also covered in our live blog, so you can follow the action if you’re out and about.

Follow all the drama of the BoyleSports Grand Slam of Darts Final with us at Online Darts.