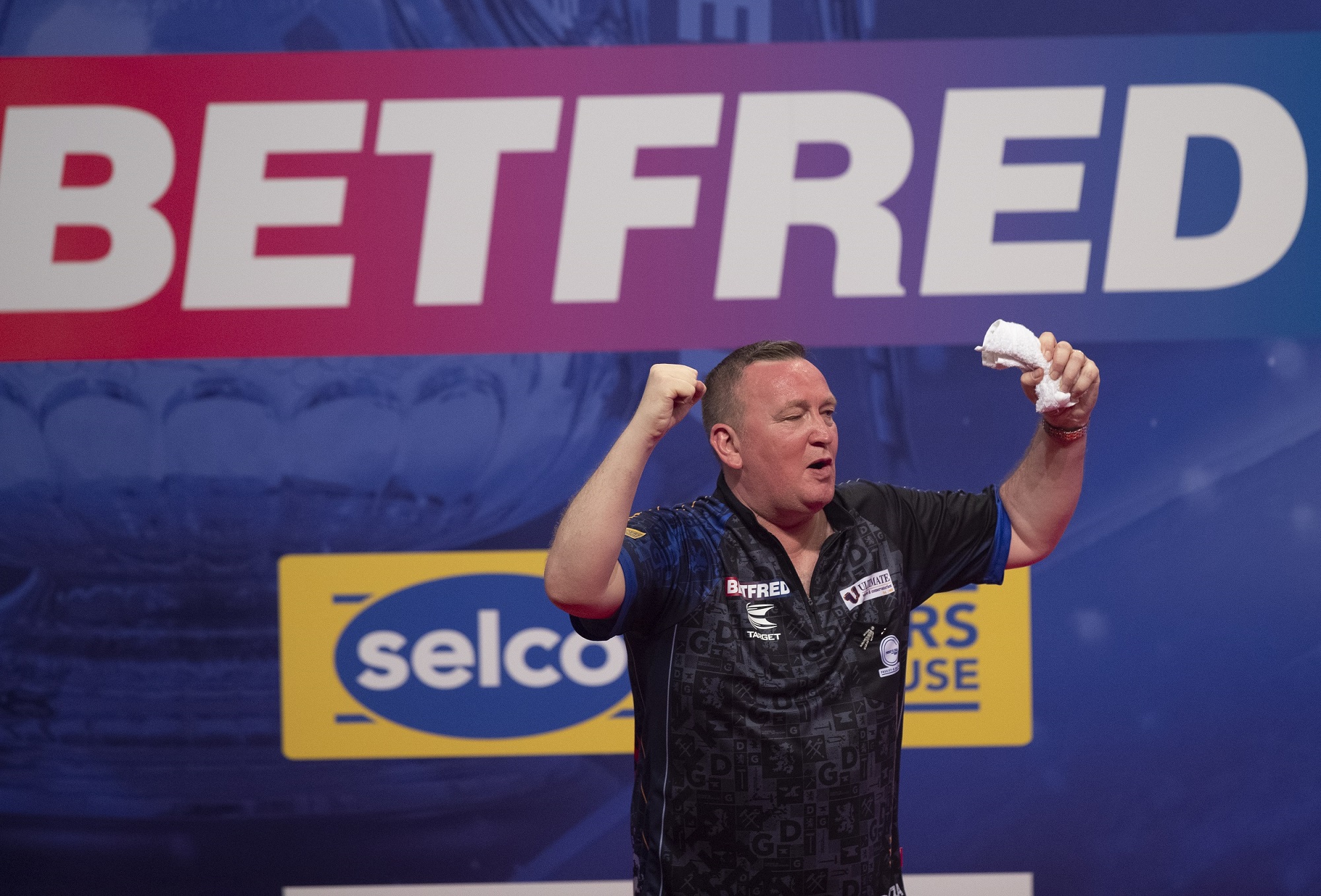 Durrant beat Wright for the first time on TV, to make the quarter finals for the second straight year.

Elsewhere on day 5 of the World Matchplay:

Durrant does the job over Wright

Both missed early chances to break each other’s throw in the opening two legs, but Wright got the first of the match. After Duzza missed two at D6, Snakebite found D20 for a 3-1 lead.

The Scotsman led 4-1 at the first interval, but continued to miss doubles in the second session. Duzza punished him throughout, hitting a 104 and 94 checkout en route to a 5-0 whitewash session.

Durrant would win six straight legs, but then missed five for an 8-4 lead and to consolidate a double break of throw. Wright then found D4 to get one of the breaks back, and went on a roll, winning four straight legs to take an 8-7 lead.

It would be Snakebite who would miss a double for 9-7 in the next leg, leaving Duzza to ping it himself to level the game at 8-8. The crucial break came in the 17th leg, as the Teesider would find D5 to get a break of throw and go 9-8 up, with Wright left on 36. Duzza then finished off the match with another two legs to win a gritty game 11-8.

After his victory, Durrant told Online Darts: “I’m always looking for perfection. I just had a really bizarre time up there, I just felt the treble 19 was the smallest treble on the board, and treble 19 was a huge part of my game.”

“I knew Peter wasn’t at his best, but I’m really happy.”

Vincent Van der Voort was the first man to win on day 5 of the World Matchplay. He beat Daryl Gurney 11-5 to reach the quarter finals for the first time since 2009.

The Dutchman got off to the perfect start.  He won the opening session 5-0 to get a triple break, despite Gurney missing darts to win both legs Van der Voort had the throw.

Gurney got one of the breaks back in the sixth leg with a 13 darter, before holding to make it 5-2. Van der Voort managed to regain the triple break in the ninth leg though, hitting D10 for a 14 darter after Gurney missed D16 for the leg.

Going in 8-2 up at the second interval, it was only a matter of time before Van der Voort made the quarter finals. He went 10-2 up after winning five straight legs. Despite a mini revival from Gurney to get back to 5-10, the Dutch Destroyer held his throw with a 94 checkout to win the match 11-5.

Van der Voort told Online Darts afterwards: “It was a good win. I was practicing so well, but you never know what goes on on stage.

“The first five legs I played amazing. That showed what I can do when I’m healthy and on form.”

Both players held their throw early on, and then traded breaks in a cagey start. Cullen though found a break of throw in the fifth leg, as he found D1 to punish the Belgian’s miss at D10. The Rockstar lead 3-2 going into the first interval.

Cullen took a 5-2 lead with a double break, but Van den Bergh came back straight away with a break of his own to cut the gap to 5-3. Despite carving out chances to level, the Belgian couldn’t take them. This led The Rockstar to hit D16 and take a 6-4 lead into the second interval.

Cullen then found an 11 darter to get a double break at 8-5, and it seemed he was heading to the quarter finals just like two years ago. Van den Bergh fired back though, and punished two chances for Cullen to hold throw to get it back to 8-8.

After both held their throw for 9-9, the Belgian got the crucial break in the 19th leg. With his last dart in hand, he pinged D4 to go 10-9 up and throw for the match. It took him six attempts in the first leg, but Van den Bergh hit D1 to hold his throw and complete the comeback 11-9.

An emotional Dimitri told Online Darts after his win: “I am happy. I am proud. It wasn’t the best game, but my B game is getting better.”

“I didn’t feel that I was playing well, but I saw the averages and I was like ‘oh, is that what I’ve pulled off?’ Those are the things that I know I can do, and it’s happening more regular now.”

Adrian Lewis looked somewhere near his best again on day five of the World Matchplay. The two time back to back World Champion beat Danny Noppert 11-7.

Lewis started the game strongly, but despite holding his throw easily, could not carve out opportunities to break Noppert. The Dutchman held his throw to go 3-2 up at the first interval.

Lewis continued his astonishing start, and deservedly found a break in the seventh leg to go 4-3 up, averaging 110 at this point. He couldn’t consolidate it though, missing eight darts for the eighth leg. This allowed Noppert to break straight back and make the game level at 4-4.

After two holds of throw, it was 5-5 at the second interval. Jackpot came racing out the blocks in the 11th leg, and found a magnificent 120 checkout for a 15 dart break to go 6-5 up. Once again though, he couldn’t consolidate the break. The Dutchman found a 14 dart break of his own, hitting 48 to level at 6-6. At this point, Noppert was six of eight on the checkouts.

It was at this point Lewis turned up the gears. He broke straight back for a 7-6 lead, after Noppert did not leave a shot at a double when on 76. This seemed to galvanise Jackpot, who scored brilliantly to hold his throw in the next leg, and put some daylight between the pair.

Lewis then broke Noppert’s throw again in the 15th leg, and held his throw twice to win 11-7 and set up a quarter final with Dimitri Van den Bergh. Jackpot won five of the last six legs.

After his win, Lewis said to Online Darts: “It was tough. It wasn’t just the pace he was throwing at. He’s very consistent, and he takes out massive shots. He’s got a lot of bottle he has.

Jackpot also said he had got some advice from 16 time Matchplay champion Phil Taylor over lockdown. He said: “me and Phil go back a long way, but I could win 20 World titles and he’d still say I’m rubbish!”