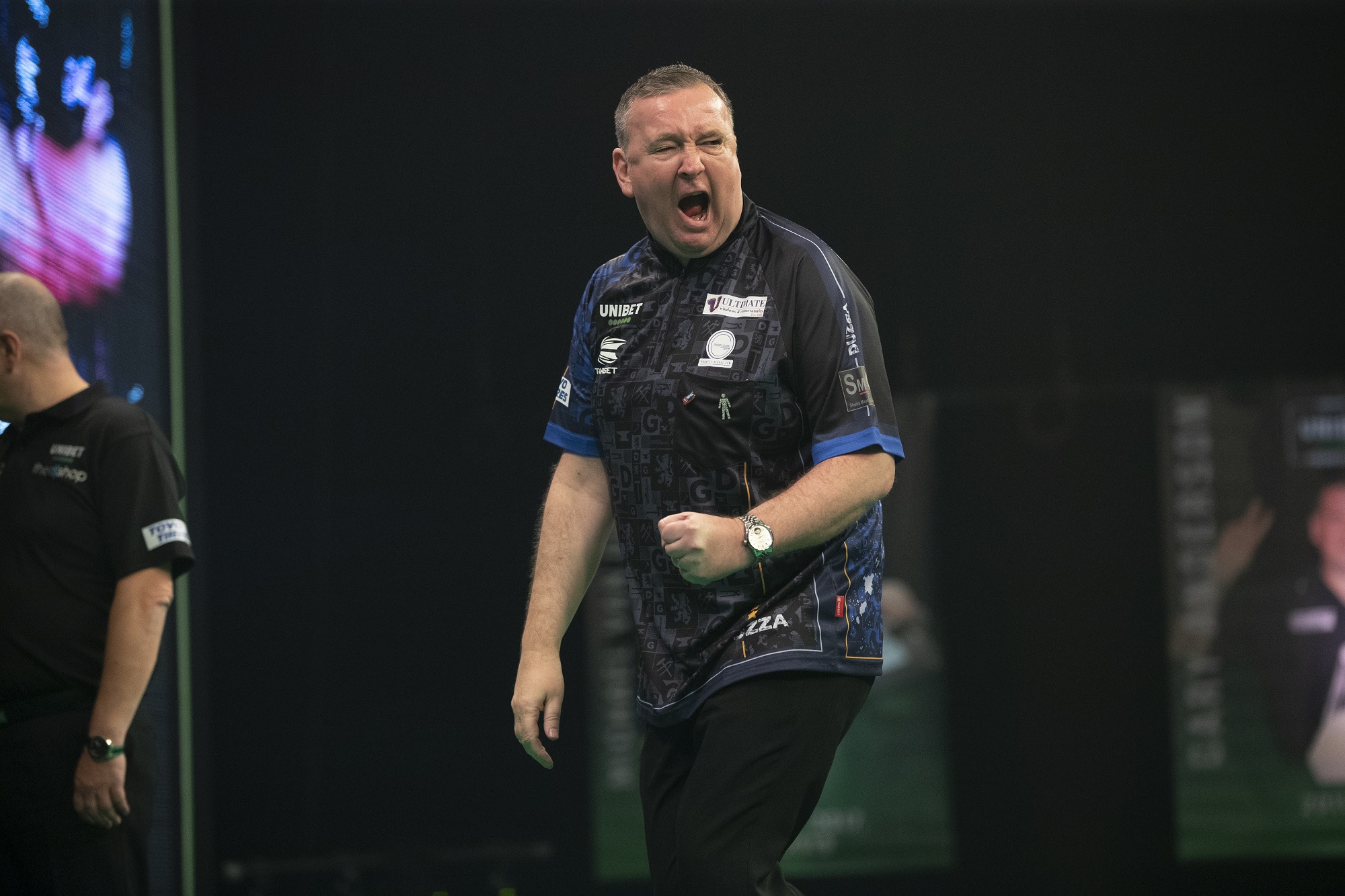 Duzza defeated the world number one 7-3 to move back to the top of the table.

Elsewhere on night eight of the Premier League:

Coming into the game, the talk was about Glen Durrant having an undefeated record against Michael van Gerwen. Duzza improved that record this time to 3-0.

With words being exchanged in the build up where MvG called Durrant a “boring player,” and Durrant saying van Gerwen “doesn’t show me an awful lot of respect,” it was always going to be tense between the pair. It showed in the opening legs, where both held their throw twice for a 2-2 game.

The match turned in the fifth leg. With van Gerwen on 152, Durrant hit a magical 167 out to get a break of throw and lead 3-2. The world number one then missed two more chances to level in the next leg, and Duzza hit tops to go 4-2 up.

The three time BDO world champion won another two legs to guarantee a point. Despite MvG winning a third leg, it only delayed the inevitable as Durrant hit a 68 out to take a 7-3 win.

That’s a big night for me. Tonight I’m going to celebrate. I’ve got so much respect for [Michael van Gerwen}, there’s no rivalry there.

Gurney moves out the drop zone

Daryl Gurney beat Nathan Aspinall 7-5 on night eight of the Premier League. In doing so, he moved out of the relegation zone and has his fate in his own hands on Judgement Night tomorrow.

The match started cautiously, but came alive in the fourth leg, as Gurney hit a fantastic 144 checkout to level the game at 2-2.

The crucial moment came in the seventh leg. With the score at 3-3, Aspinall missed three darts to hold his throw, and Superchin managed to find a 60 finish to get the break at 4-3.

Gurney consolidated the break with a D6, and after holding his throw in the final leg of the match, took a crucial two points with a 7-5 victory. Aspinall averaged 103 and hit five maximums, but could not manage to find the break back for at least a point and now slips out the top four. For Superchin, it means he’s now eighth, and a win tomorrow will see him remain in the Premier League.

After his victory, Gurney said to Online Darts: “As long as I avoid elimination, I’m happy. I was trying my damndest, I was taking out finishes on my last dart.

“The 144 and the 60 really hurt him. Thankfully I got over the finish line and got two points instead of one.”

The man who has replaced Daryl Gurney in the relegation zone is Rob Cross. He lost 7-3 to Michael Smith and now needs to win tomorrow night to have any chance of staying up.

Smith managed to punish missed darts at double from Cross from the beginning. He took a 3-0 lead early on, with Voltage missing darts to win two of the legs.

Cross came fighting back though. A fantastic 143 out broke Smith’s throw in the fifth leg, before holding throw for a second straight time to level up at 3-3.

That would be the last leg the former World Champion would win though. Smith won four straight legs, with Cross missing three in the eighth to level at 4-4, to move back into the Play-Off places.

Smith said to Online Darts afterwards: “I’m just glad to get the win, especially after yesterday when I played really well.

Tonight, I don’t think I was any better. It’s just that Rob kept letting me back in when I was giving him chances.

Gerwyn Price made sure of safety in the 2020 Premier League, cruising past Gary Anderson 7-1.

Despite playing with no crowd noise for the first four legs, it seemed to help the Welshman. He averaged over 100 en route to a 4-0 lead.

The crowd noise was suddenly then piped into the arena at the start of leg five, the only leg Anderson would win by hitting a brilliant 116 checkout.

Normal service resumed for the rest of the match, with Price easily winning the remaining three legs to move within two points of the Play-Off places.

After his win, Price told Online Darts: “I was in the zone [after four legs], and all of a sudden the sound came from nowhere. Apparently the machine was broke, which was good, and then they fixed it, which was bad.

“I’m not happy with the sound behind me, I don’t play well with it. The fact that it’s there, and I’m thinking about it, is a problem.”

It’s now seven points out of eight for Peter Wright. He moved into third place on night eight of the Premier League with a convincing 7-1 win over challenger Jeffrey De Zwaan.

The World Champion and The Black Cobra both played in orange, reminding us that this night would have been played in front of 10,000 amazing fans in Rotterdam. It was 1-1 after two legs, and then Wright took control.

Snakebite hit a brilliant 130 checkout to get the first break of the night to lead 3-1, and never looked back. Despite De Zwaan having some opportunities to get back in the game, he couldn’t take them, leaving Wright to win six straight legs and move into the Play-Off spots for the first time this season.

Wright said to Online Darts after the win: “I was confident in my darts, but to get 7-1 against a quality player is no easy task.