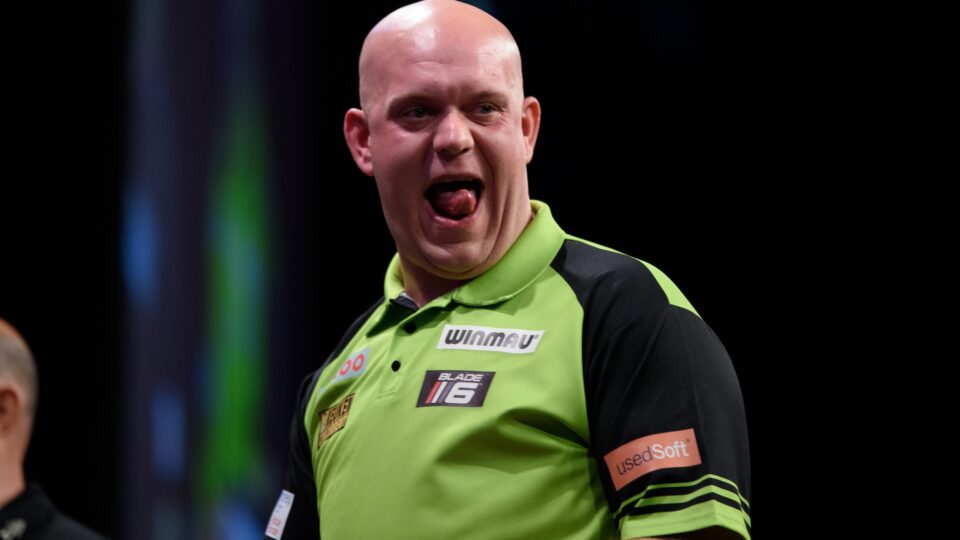 The early stages were one sided with Soutar taking the first three legs. Aspinall fought back to level the game up at four each, however, Soutar found a wonderful 12 dart leg to hold and seal the victory.

The other game in this group saw Fallon Sherrock lose in her opening game for a second year running to Peter Wright.

The scoreline could of been very different, but it Sherrock struggled on the doubles and Peter Wright took advantage

Jonny Clayton tops the group after a night one with a demolition job over Leonard Gates winning 5-0.

The Ferret was in total control from the off and only allowed Gates one dart at a double all game.

One of the biggest shocks on day one came in this group with Jermaine Wattimena getting the better of Damon Heta 5-2.

Michael Van Gerwen got his campaign off to a fantastic start with an average over 100 on his way to defeating Nathan Rafferty.

Both players fired in a ton plus checkout during the game, and seven 180s between them. The consistency of Michael was too much for Nathan in the end.

The other game in the group went all the way and a special 104 checkout from Luke Woodhouse was enough to seal the victory.

So many people called this Group of Death and after the first night its still hard to pick.

Luke Humphries ends night one on top of the table with a 5-2 win over Challenge Tour OOM winner Scott Williams. Cool Hand fired in a 121 checkout on his way to victory.

In the other group game it was a last leg shootout to decide the winner, and Ryan Searle got the better of Josh Rock. The game showed glimpses of quality with both players hitting a ton-plus checkout, however, the key in the end was the ability of Searle to hold his nerve at the end.

Raymond van Barneveld love affair with Wolverhampton continued on Saturday afternoon with a 5-3 against Dave Chisnall.

We expected a 180 fest and both players certainly delivered with seven in eight legs to the delight of the Wolverhampton crowd.

The second game in the group saw Gerwyn Price rout Ted Evetts 5-1. The Iceman meant business from the start winning the first three legs and finished with a 101 average.

On Sunday in Group A we will see Gerwyn Price take on Raymond van Barneveld, that will follow Ted Evetts against Dave Chisnall

Simon Whitlock and Mensur Suljovic opened up proceedings in this years Grand Slam of Darts, and it was Whitlock who got the win, defeating Suljovic 5-2.

The result always looked to be going the way of The Wizard and he lead 3-0 before a mini fightback from The Gentle. Whitlock then won leg six before a 12 darter to seal the win.

The Second game in this group saw Noppert pushed all the way to get win over Christian Perez.

Danny Noppert looked to be breezing to victory with the score 4-2, however Perez wasn’t giving up without a fight and even had a match dart, before Noppert sealed the victory.

Group C went the way of the favourites with wins for Cullen and Smith.

First up it was Joe Cullen who didn’t need to get out of second gear to get the better of Ritchie Edhouse. The Rockstar averaged just over 93 and fired in two 180s on his way to a 5-1 victory.

It was more of a battle for Bully Boy against Lisa Ashton. With the game at 3-3 all had to show some real bottle to get over the line and with a 12 dart leg in the final leg he certainly done that in style.

With wins for Cullen and Smith, it means they will meet on Sunday afternoon.

We had maximum legs in the first game of Group D and it was Dirk Van Duijvenbode who prevailed.

The Aubiergenius got the highest average of the afternoon with 102.89 but was pushed all the way by Martin Schindler in a very entertaining encounter.

The second game in group went the way of Rob Cross who defeated Adam Gawlas. Gawlas started the stronger taking the first two legs, before Cross found his rhythm to reel off five on the spin and set up a Sunday afternoon tie with Dirk Van Duijvenbode.