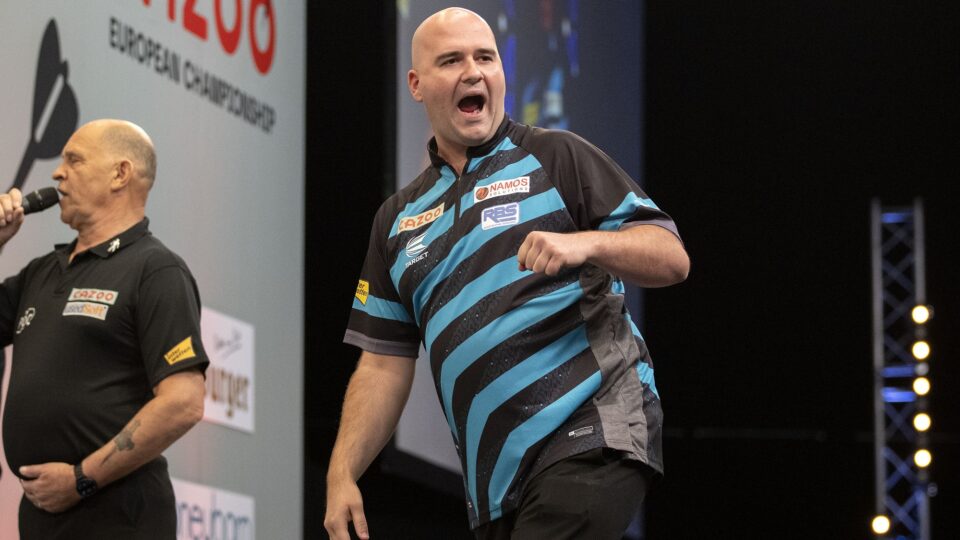 The Grand Slam of Darts got underway on Saturday Afternoon. The session saw the World Number One, Gerwyn Price, as well as recent winners and form players in Jonny Clayton and Rob Cross, get their campaigns underway.

Here’s how the action unfolded…

Grand Slam of Darts Group A

Krzysztof Ratajski got the first win in Group A with a minimum of fuss as he defeated Martin Schindler 5-1.

The Pole, who rarely looks flustered anyway, took control of the match after a raft of missed doubles in leg 4, eventually hitting double 10 for the first break of the match. Despite a 180 from Schindler in each of the next 2 legs, Ratajski took them both to quickly wrapped up the win.

World Number One and World Champion, Gerwyn Price started his Grand Slam campaign with a hard fought 5-4 win over Nathan Rafferty. The debutant pushed him all the way, and had a single dart at the bullseye for the win.

It was a match of missed bullseyes as Price twice missed the red bit going for 170 and 167 to break Rafferty in leg 2 and 4 respectively. On both occasions, Rafferty held next visit. Price missed 5 straight darts at double in the decider, with the crowd once again getting involved. Before falling over the line last dart in hand on Double 5.

Grand Slam of Darts Group B

An early shock as Blackburn’s Bradley Brooks defeated Mervyn King. It was a clinic of 70-odd finishes from the 2020 World Youth Champion. Brooks had two 74 checkouts and one of 76 as he went on to wrap up the win with relative ease.

It wasn’t the highest scoring encounter, but the finishing was the difference. Brooks was 5/11 (45.45%) on the outer ring and that took him to a 5-1 victory.

Match two in Group B was a high class encounter between the World Grand Prix champion, Jonny Clayton, and Rusty-Jake Rodriguez.

It was The Ferret who came out on top. After breaking the RJR throw in leg one, he always just kept the Austrian at arm’s length. He had to play well to do so though. Jonny hit three 180s and a 108 checkout on his way to a 5-3 win.

The shocks continued as Jim Williams defeated James Wade in a last leg decider. The Welshman, ranked 171 in the world, started the match with a 104 checkout to take leg one before Wade took out 100 in 2 darts to go a break ahead in leg 3.

A 180 from Williams and 3 missed darts at his favourite Double 10 for Wade, allowed Williams to break straight back. From there, he was never behind again and despite missing Double 20 for Shanghai to wrap up the match 5-3, he held his nerve in the decider to pick up the win.

In the other game in the Group, Rob Cross produced the first whitewash of the tournament. Boris Krcmar was on the receiving end of an impressive performance from the recent European Champion.

Krcmar wasn’t without his chances, but missed darts at double on his own throw were punished by Cross, who comfortably held when he had the darts and finished off by finding the bottom corner of Double 8 for 5-0.

In a tie fit to start any tournament, Ryan Joyce upset Stephen Bunting in the opener. This came despite Bunting hitting his second highest ever TV average of 106.70 and having a dart for the match in the deciding leg.

Joyce had in the eighth leg missed double 9 for the match, before Bunting dropped low on tops for a 148 checkout to win the match. It would be his last dart of the match as Joyce took out 68 to hold throw and kick off his campaign with a 5-4 victory.

The group with the first match of the session also had the last, as late replacement and recent Pro Tour winner Chris Dobey took on Rowby-John Rodriguez.

It was a close fought battle in which RJR took an early advantage kicking off with 5 perfect darts in the opener, before breaking in leg 4 with a last dart in hand Double 5 to lead 3-1. Dobey broke back to get back to 3-4, with what looked like a turning point, but when he missed darts at Double 18 and Double 9, RJR came back to wrap up the 5-3 win.