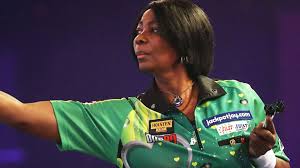 Deta Hedman heads the Order of Merit after day one of the PDC Women’s Series.

The 60 year old made the semi final of event one, before winning event two in Barnsley.

She leads by £350 from nearest rival Lisa Ashton, who is £50 ahead of Fallon Sherrock. It leaves The Dark Destroyer in a fantastic spot to qualify for her maiden William Hill World Darts Championship tomorrow.

Hedman looked good from the start of the day in event one. She dropped one leg en route to the semi final, beating Corrine Hammond 4-1 in the last eight.

That set up a semi final against Queen of the Palace Fallon Sherrock. Hedman missed match darts to move into the final, and ultimately lost to Sherrock 5-4.

The Dark Destroyer would put that disappointment behind her though in event two. After winning her opening game 4-0 against Lainley Webb, she took on three time World Champion Anastasia Dobromysolva in the last 32. Hedman would beat the Russian 4-2, before winning her last 16 match against Natalie Gilbert 4-0.

Another 4-0 victory, this time against Vicky Pruim in the quarter finals, set up another semi final with Sherrock. This time, Hedman would punish missed darts at double from the Milton Keynes woman, producing some stunning checkouts to win 5-1 and move into her first final against Aileen de Graaf.

De Graaf, who had beaten Lorraine Winstanley 5-3 in her semi final, started brighter. After both players held throw twice, de Graaf would get the first break of the match to lead 3-2. Hedman would break straight back to level at 3-3, before de Graaf found a 100 checkout to break once again and lead 4-3.

Both players missed multiple darts to win the eighth leg, but de Graaf would find double 16 to go 5-3 ahead and move within a leg of the match. However, she would miss a bullseye for a 124 shot in the next leg for the title, allowing Hedman to ping an 87 outshot and stay in the contest.

This seemed to ignite The Dark Destroyer. After breaking throw in the tenth leg with a 56 outshot, she would then find a brilliant 134 set up shot to leave double eight, which she hit to win the match 6-5 and pull clear at the top of the Order of Merit.

Ashton in second but Sherrock in touching distance

Lisa Ashton initially looked the woman to beat on day one of the PDC Women’s Series.

After winning a Grand Slam spot yesterday, she looked in complete control in event one. She lost just two legs en route to the final, coming through 5-1 against Jo Locke in the semi final.

The final was against Sherrock, and Ashton produced some stunning stuff to win the title. After sharing the opening the two legs on throw, the Lancashire Rose produced magic to win the fifth leg. With the Queen of the Palace on 114, Ashton would find a brilliant 170 finish, to reel in The Big Fish and go 3-2 ahead with a break of throw.

Sherrock would try to put it behind her, finding a 58 outshot to break back at 3-3, but then the four time World Champion took control. She broke Sherrock again in 12 darts to lead 4-3, but finding a 17 dart hold of throw to move one from the match. Ashton would then end the contest with a 100 outshot, to find a 12 dart break of throw and win 6-3.

Ashton was then knocked out in the last 32 by Corrine Hammond, her first loss of the entire weekend. It means she is on £1050, £50 ahead of Sherrock. The woman from Milton Keynes had a solid day, reaching two semi finals and a final. However, she knows she will have to better Ashton’s performance tomorrow to get a trip back to Alexandra Palace in December.