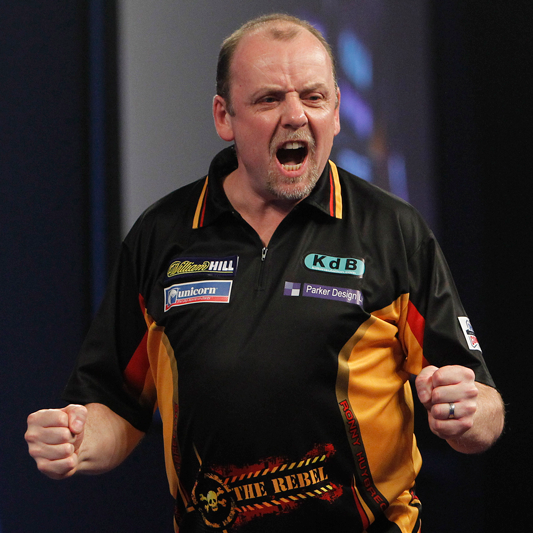 Ronny Huybrechts advanced to the Final Stage on day two of Stage 1B of PDC Q-School.

The Belgian, brother of Kim, capped an impressive day by beating Marcel Gerdon 6-0 in the last 8 to secure a spot in Stage Two.

Also advancing in Niedernhausen were;

Huybrechts rolls back the years

It was a very impressive day for the 55 year old from Antwerp, who looked the player we saw taking the runner up spot in the 2013 World Cup of Darts with brother Kim, as he only dropped 4 legs on the day.

All 4 of those legs came in his last 16 game against Dutchman, Gino Vos. With ‘The Rebel’ advancing 6-4 and handing out whitewashes to all his other opponents on day two.

Jose Justicia followed him into Stage Two, with a 6-3 win over Italy’s Daniele Petri. The day wasn’t all plain sailing for Justicia as he had to come back from 5-4 down to beat Jimmy Hendriks in his penultimate game.

Next up was Florian Hempel who, despite a few missed doubles in the final leg, beat former BDO World Champion Christian Kist 6-4 to book his place in the final stage of Q-School.

Rounding up the automatic qualifiers was Davyd Venken, who put in a fantastic performance to beat Matt Campbell of Canada 6-1.

All the runners up in today’s quarter finals will be fairly satisfied with the day’s work though, putting themselves in with a great shot of securing a place in Stage Two.

Baggish loses in first round again, as Askew stars

World Championship star Danny Baggish was an early casualty in UK Q-School Stage 1B for the second straight day, losing 6-4 to Justin Hood despite throwing a 91.6 average. Raising the question of whether he should have followed Matt Campbell to Niedernhausen.

Elsewhere though Jason Askew overcame the disappointment of yesterday’s last 32 loss to 9 dart hero Jose Marques, by beating the also impressive Jarred Cole 6-2 to secure his place in the final stage.

Following him into Stage Two is Martin Heneghan, who dumped out two of the day’s better performers in the last two rounds, first despatching Andy Jenkins 6-1 before dishing out the same scoreline to Kyle Richardson.

Mark Dudbridge will also be in the final stage, after whitewashing Rhys Davies 6-0 to secure his spot.

Joining ‘Flash’, the final player to secure his place in Stage Two, was Paul Holloway who defeated Darren Johnson 6-4 in a tight encounter, taking out 100 in three darts to get over the line.

In the UK, there were also good days for Thomas Lovely and Nick Fullwell, the latter averaging 106.1 in his opening game before going on to lose a last leg decider to Jarred Cole in the last 32.