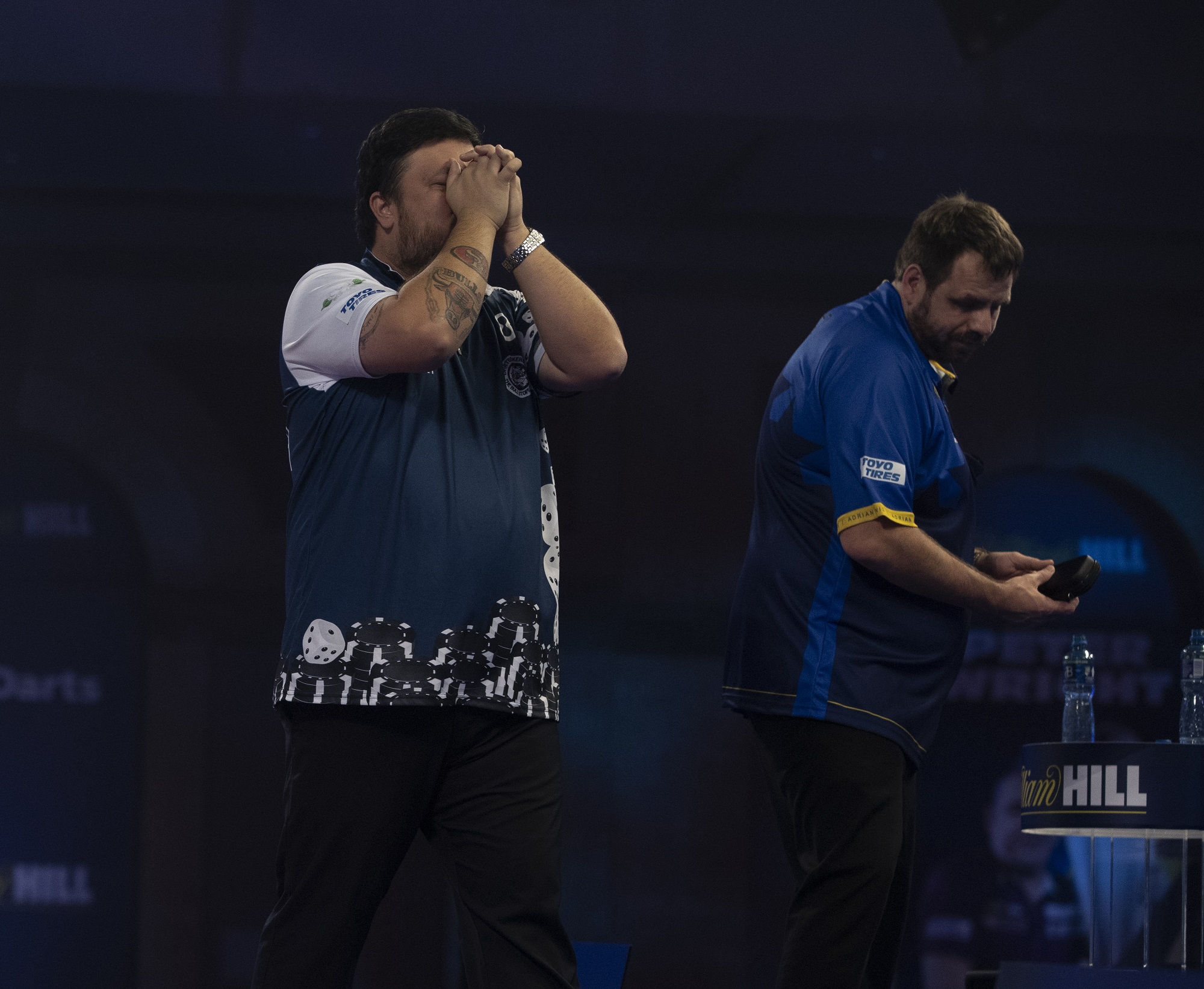 Adrian Lewis and Rob Cross were sent packing on day eight of the World Darts Championship.

Two time back to back champion Lewis lost 3-1 to American qualifier Danny Baggish. He’s the only international qualifier to make the last 32.

Cross was dumped out in the round two for the second year in a row. Dirk van Duijvenbode beat him 3-2 in a high quality affair.

Danny Baggish produced arguably the upset of the World Darts Championship so far on day eight. He knocked out two time back to back World Champion Adrian Lewis 3-1.

The first set foreshadowed what was to come for Jackpot. He missed five darts at a double, including three to win leg two, as Baggish won the set 3-0 in 45 darts. Lewis eventually got on the board in the fifth leg, to level the second at 1-1. The third leg saw both players miss a combined 15 darts at a double, including two bust scores from Lewis. Baggish eventually found double two for a 2-1 lead, before firing in a 79 outshot to go two sets up.

However, the first 170 outshot of the tournament from Baggish saw momentum swing back in his favour. Jackpot then missed three for the set, and the American found a 91 shot on tops to level up. Baggish completed the upset with a 15 dart hold on tops, to win the set 3-2 and the match 3-1. The American faces Glen Durrant in round three.

Rob Cross was the second World Champion to fall on day eight. He lost 3-2 to Dirk van Duijvenbode in an epic contest.

The first set saw five 180s between the pair, as Voltage hit a 90 outshot in the fourth leg to take it, punishing a missed dart at bull from Van Duijvenbode. The Aubergenius would immediately strike back, winning the second set in 51 darts thanks to a 3-0 whitewash.

Van Duijvenbode, who ended up 12/41 on the outer ring in the match, had chances to win the first four legs of the third set. However, he could not find a break of throw and despite levelling at 2-2, could not keep up with Cross in the decisive leg. Voltage found a 14 darter to take the set 3-2 and go 2-1 ahead. Once again though, the Dutchman would find a whitewash set on his throw. Despite missing eight darts for the fourth set, he eventually found double one to level up at 2-2 and force a decider.

The final set was gripping, as both players held comfortably twice to force a deciding leg. There, Cross missed a chance to take out a 138, but found treble 20 to leave himself on double six for the match. However, the Aubergenius, who’d hit three 134s to leave 99 after nine darts, found the checkout on double 18 to come through a fantastic contest, sparking wild celebrations from the Dutchman. The World Grand Prix runner up will face either Mensur Suljovic or Matthew Edgar next.

Whitlock and Van den Bergh into round three

Simon Whitlock battled through to beat Darius Labanauskas 3-2 in another game of round two contender.

The Wizard won the opening leg, before Lucky D produced some stunning darts. 104 and 115 checkouts either side of a 14 darter saw the Lithuanian take the first set 3-1. Whitlock would respond though, finding a 120 in the third leg of the second, before a 13 darter saw him win the second set 3-1 and level at 1-1.

Despite a 104 checkout from Labanauskas, the Australian would go 2-1 up in the match, finding a 12 dart leg against the throw to do so. Lucky D would not relent, going 2-0 up in the fourth set in 29 darts. The Wizard would level in 29 darts himself, before hitting 134 to leave double 18 for the match. However, the Lithuanian produced an absolutely stunning 164 outshot to level the contest to fittingly take it into a final set.

Whitlock however would not let that get to him. He found a 10 darter to take the opening leg, followed by two 16 darters, to get over the line 3-2. The Wizard found nine 180s in the final 12 legs of the match, to set up a third round meeting with Krzysztof Ratajski.

Dimitri Van den Bergh produced the performance of day eight at the World Darts Championship. He averaged 105.61 in a straight sets win over Paul Lim, in which he dropped just two legs.

The World Matchplay champion looked imperious from the start. The first set contained three 180s, as he reeled off three straight legs in 39 darts to take a 1-0 lead. Lim finally got on the board in the second set with a 75 outshot, but could not stop The Dream Maker. An 11 darter saw the Belgian level, which he followed up with a 121 on the bull, and double 16 to win the set 3-1 and go 2-0 in front.

Lim got his second leg with a 69 checkout to level the third set, but Van den Bergh would not let him off. 29 more darts from the Belgian was enough to win the set 3-1, and whitewash the Singapore legend 3-0. Van den Bergh will face Jermaine Wattimena or Nick Kenny in round three.

What else happened on day eight of the World Darts Championship?

Joe Cullen made light work of his round two game, beating Wayne Jones 3-0. The Rockstar settled well, winning set one 3-0. Cullen also went two legs ahead in the second set, before the Wanderer levelled at 2-2 and took it to a decider. However, Cullen had throw and despite missing seven darts across two legs, found double four to win the set 3-2 and go 2-0 up.

Jones hit double 18 to go 1-0 up in the third, but Cullen would not be denied his third ever win at Alexandra Palace. 47 darts from The Rockstar later, he’d won the third set 3-1 and the match 3-0, setting up a meeting with Jonny Clayton in round three.

Brendan Dolan ended Edward Foulkes’ World Darts Championship campaign in round two. Foulkes, who famously beat Mike De Decker in round one, could not live with The History Maker in set one. Dolan won it in 43 darts, hitting a 105 to take it 3-0. However, the Japanese star would level, holding throw in the final leg of the first set for 1-1.

Foulkes had a chance to win the third set, but missed tops for a 72 outshot. Dolan would come back and find double four to take the set 3-2 and go 2-1 up. That seemed to break the Japanese player’s heart, as Dolan whitewashed the fourth set to win 3-1. He faces Gerwyn Price in round three.

Danny Noppert performed well below his best, but still managed to beat African Qualifier Cameron Carolissen 3-1 to make into round three. Carolissen, who had received a bye into round two due to Martijn Kleermaker testing positive for COVID-19, started brightly. He won the first set 3-0, and went 2-0 up in the second set, capitalising on poor scoring and doubling from Noppert.

However, the South African missed two darts for a 2-0 lead, and the Dutchman capitalised. He reeled off three legs to level at 1-1, before a 23 darter in the deciding leg of the third set saw Noppert take a 2-1 lead. Carolissen ended up 9/31 on the outer ring, missing more doubles to force a deciding set, as Noppie found double 10 to stumble over the line. He faces either Dave Chisnall or Keegan Brown in round three.

Devon Petersen was also below his best, but he also won 3-1 to make into round three. He saw off Steve Lennon in his contest.

Lennon missed nine attempts at double to win the first set, which foreshadowed his entire evening. He ended up 7/46 on the outer ring, as the African Warrior found double one to go 1-0 up. More missed doubles from the Irishman so Petersen take a 2-0 lead, both times winning 3-2.

Petersen did not fare much better on the doubles himself, finishing 11/44 on the checkouts. Both players missed a combined 12 darts at double for the third set, with Lennon finding double one to take it 3-2 and trail 2-1. However, a 121 finish on the bull at the start of the fourth helped settle any nerves for The African Warrior, as a 105 and 60 checkout saw him win the fourth set 3-0 and the match 3-1. He faces either Michael Smith or Jason Lowe in round three.