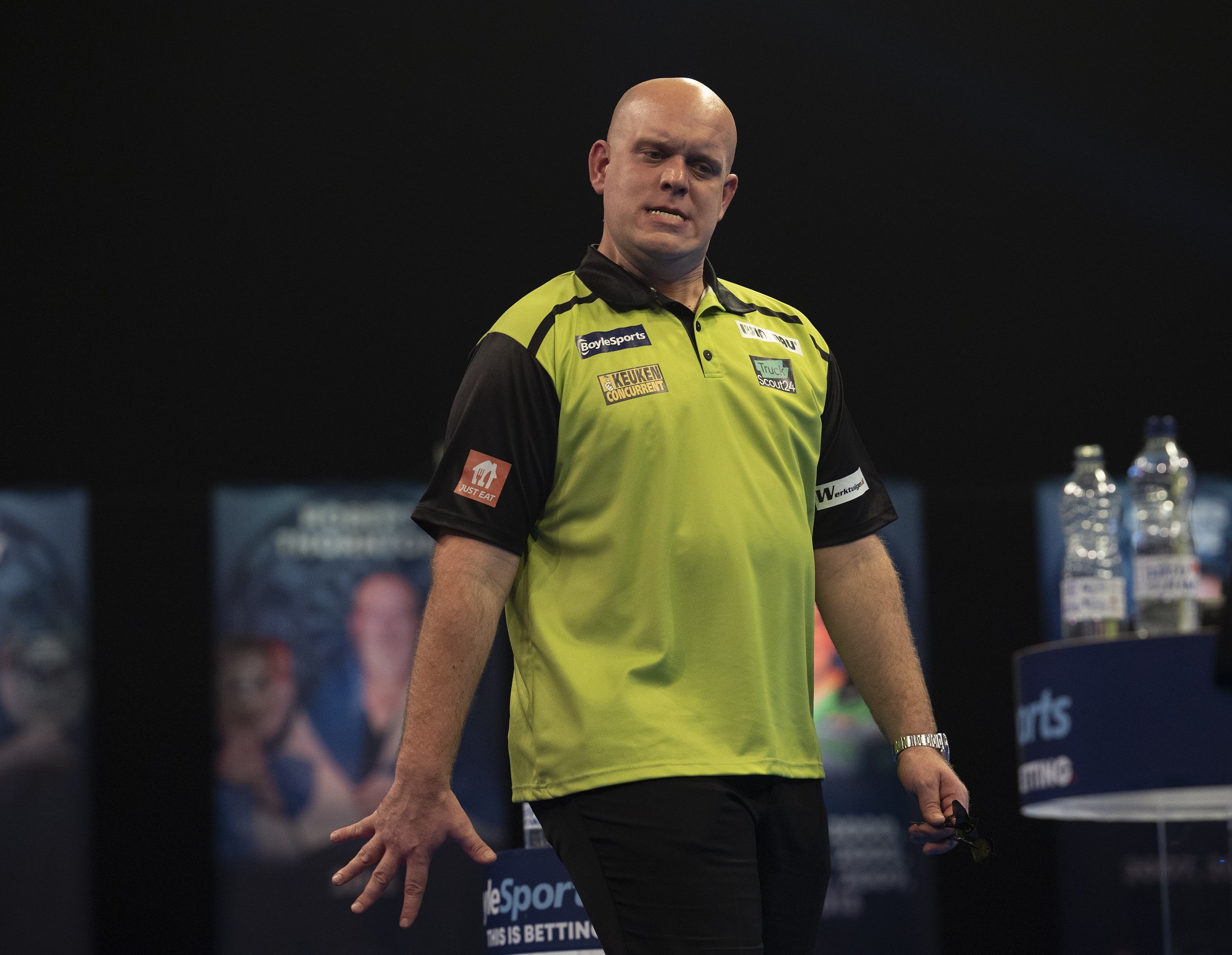 It means that Whitlock and van Duijvenbode will meet in the last four tomorrow, but there were no surprises in the bottom half. Gerwyn Price is now the clear favourite to win the tournament, after beating Jeffrey De Zwaan 3-0. He will meet Dave Chisnall in the other semi final, after he came from 2-0 behind once again to beat Joe Cullen 3-2.

At the 2020 Betfred World Matchplay, Simon Whitlock beat Michael van Gerwen 11-4 in round two. Tonight in Coventry, it was arguably a better performance from The Wizard to knock out the five time defending champion.

Whitlock held his throw in the first leg, finding double four in the bottom corner with MvG on 40. This seemed to give him confidence, as he hit a brilliant 107 outshot with after van Gerwen missed two to level in the next. The Green Machine would break the throw straight back, but was powerless to stop Whitlock hitting 76 to take the opening set 3-1.

The Australian continued to put van Gerwen under pressure in the second set. After the world number one missed four for a 1-0 lead, Whitlock found a stunning 100 outshot, hitting two double tops in the process. This gave the Wizard even more confidence, as he wrapped up the next two legs to whitewash the second set 3-0, and go 2-0 ahead.

After van Gerwen missed a 116 to break the throw at the start of the third set, Whitlock found double eight to hold. MvG would hold himself to win his second leg of the contest, but that was all he would win. Whitlock held throw once again, before nearly ending the match with a 170 checkout. He had to settle by hitting double four to clean up the 25, winning the match 3-0 and knocking a shell shocked van Gerwen out of the tournament.

The first set started cautiously, with the two players both holding their throw twice to force a deciding leg. There, Anderson could not get going, as it took him five darts to find a double and get in. Despite hitting the first 180 of the match, he could not stop Van Duijvenbode hitting double eight to win the set and go 1-0 ahead.

Van Duijvenbode broke Anderson’s throw immediately at the start of the second set, hitting double 19 to go 1-0 ahead. The Dutchman then held his throw twice more, pinging double 18 to take the set 3-1 and lead 2-0, pushing his average close to 97.

The Dutchman did not relent during the third set. After holding throw, he capitalised on Anderson taking nine darts to get into the second leg, eventually breaking by hitting double 16 to go within one of the match. However, Anderson responded with a 97 outshot to get the break straight back, and then held throw to take the set to a deciding leg. The Dutchman would miss double 16 for a 152 to win it, leaving The Flying Scotsman to find double top to win the set 3-2 and trail 2-1.

The crucial moment came in the first leg of the fourth set. There, Anderson took 11 darts to get into the leg while on throw. This allowed van Duijvenbode to find a 180 followed by a 53 outshot to break. After both held, the Dutchman was ahead 2-1 in the set and throwing for the match once again. This time he sealed the win by hitting tops to take the set and the match 3-1.

Gerwyn Price easily brushed aside Jeffrey De Zwaan on night five of the BoyleSports World Grand Prix. The Iceman won 3-1 to make his first ever semi final at this event.

It was a rocky start for the world number three, who eventually found double three to take the opening leg when both players had missed chances for it. He then consolidated the early break by finding double ten to hold, after De Zwaan missed three chances of his own to break straight back. The third leg was routine for Price though, as he hit 56 on tops to break The Black Cobra’s throw again and win the opening set 3-0.

The second set was a much more tense affair. Both players held throw twice in the opening four legs, despite Price having chances to break. This meant the set was level at 2-2, and a sudden death leg would decide it. There, The Iceman showed his class, comfortably holding throw with a 60 outshot to take the set 3-2 and lead 2-0.

De Zwaan would not go down without fighting though. After he held throw with a 22 darter, he would lead the third set 2-1 going into the fourth set. There, he produced his best scoring leg of the match, and hit a 48 outshot on double 16 to break the Price throw for the first time, winning the set 3-1 to trail 2-1.

Both players once again held throw at the start of the fourth set, meaning Price was leading 2-1 and one leg from the match. He then wrapped up the match in style, pinging a beautiful 164 checkout to break the De Zwaan throw, and win the set and the match 3-1 to reach his maiden World Grand Prix semi final.

For the second straight evening, Dave Chisnall came back from 2-0 down to win on night five of the BoyleSports World Grand Prix. He beat The Rockstar Joe Cullen 3-2.

Chisnall signalled his intentions early on with a brilliant 150 to win the opening leg, but was forced into a decider at the end of the first set. There he missed nine darts to take a 1-0 lead, leaving Cullen to catch up and eventually hit double eight to steal the first set from Chizzy.

The ending to the second set was just as crazy. After both players twice held their throw, the set was level at 2-2 and entered a decider. This time, Chisnall missed five set darts, while Cullen missed six, before the Rockstar found double seven to once again pinch the set and take a 2-0 lead.

However, much like last night against Ryan Joyce, Chisnall would not go away. Another 150 saw him hold throw in the first leg of the third set, before he got his first break of throw with a 54 out in the next. He then wrapped up the set in quick time, finding double eight for the whitewash to trail 2-1.

After both held throw in the opening two legs of the fourth set, Chisnall would break after Cullen missed three darts to go within one of the match. He cleaned up 25 for a 2-1 lead, followed by a stunning 155 checkout to hold throw and to take the fourth set 3-1, once again sending his match into a deciding set.

Chizzy raced into a two leg lead, finding double four to go within one of the match. However, The Rockstar showed his fighting spirit, hitting 48 to break straight back and keep the set on throw and then holding to force a deciding leg. Chisnall had the darts, and made the advantage pay, hitting double ten to win the set and the match 3-2, and ending another Grand Prix classic in the first ever meeting between the pair.

The BoyleSports World Grand Prix will be live on Sky Sports in the UK. You can watch it outside the UK via the PDC’s broadcast partners, such as RTL or DAZN.